Tableau in the French Quarter 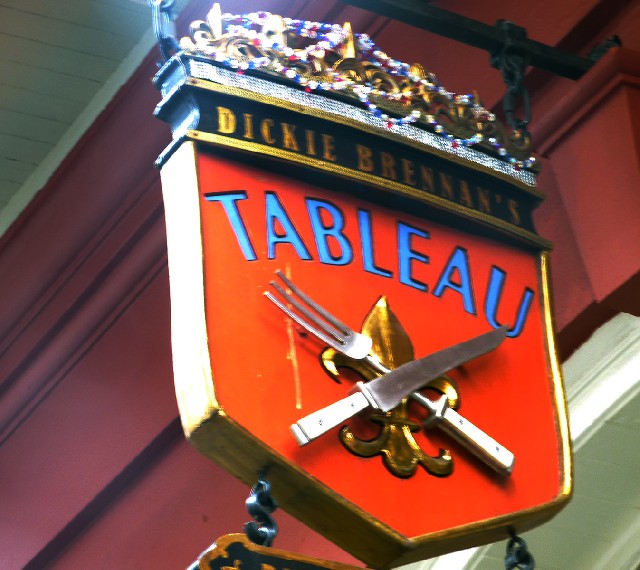 Upscale Tableau in the French Quarter. 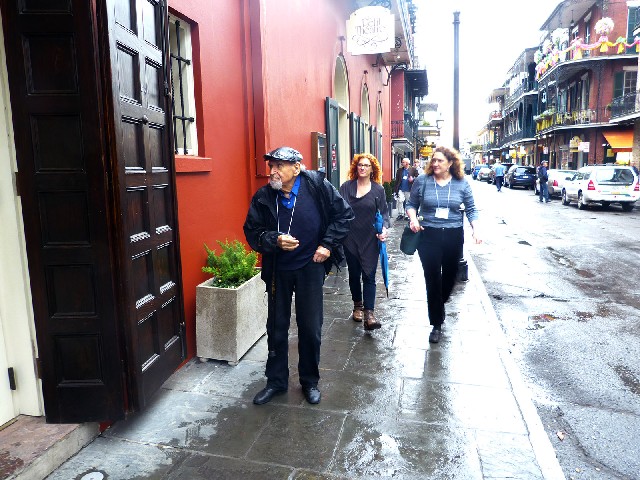 ATCA colleagues arriving at the restaurant. 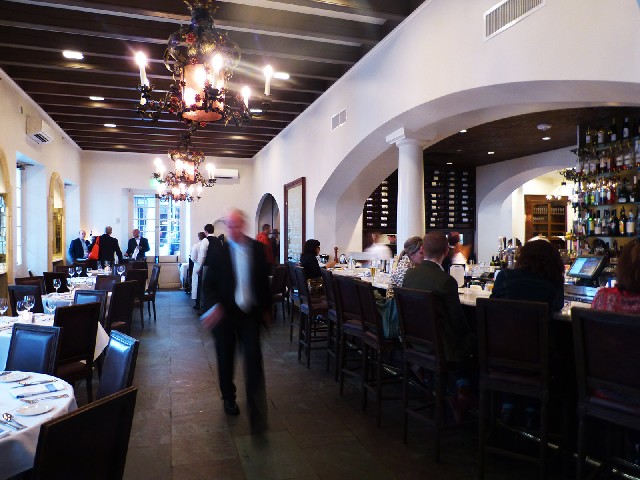 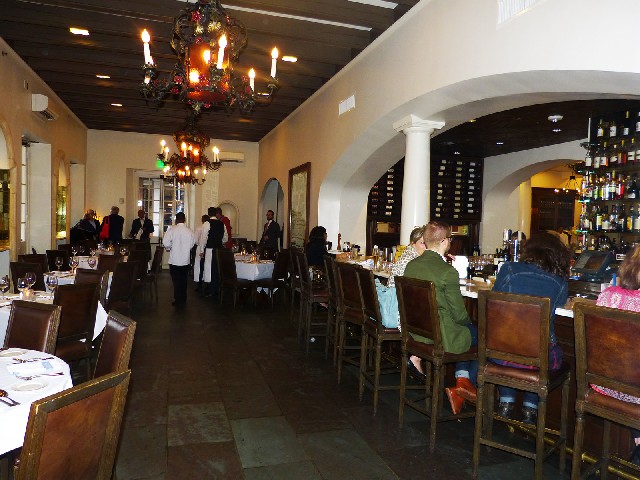 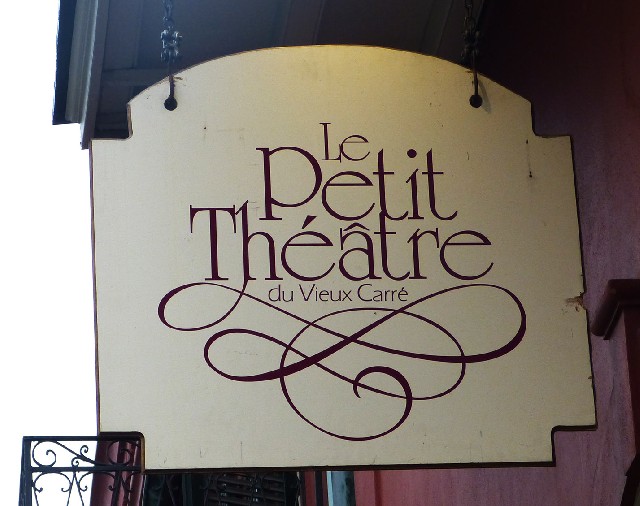 It shares a building with the venerable Le Petit Theatre. 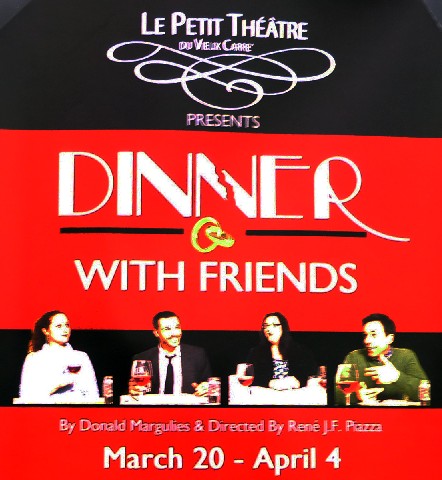 With some irony the play we were seeing was Dinner with Friends. 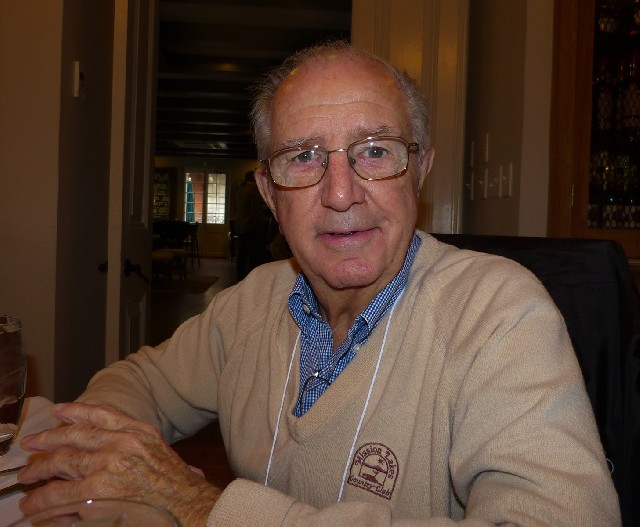 After some confusion we were joined by California critic Jack Lyons. 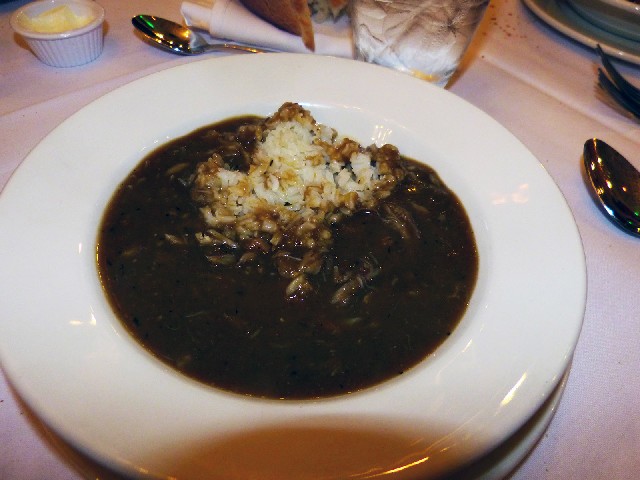 Starting with seafood gumbo it proved to be too salty. 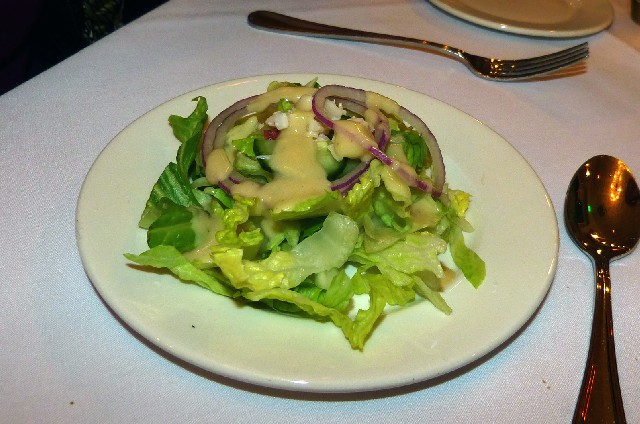 Astrid’s salad proved to be miniscule. 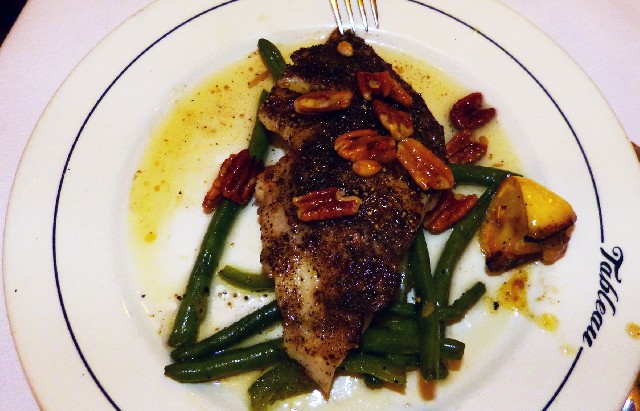 Astrid ordered the grilled fish which was nicely prepared. 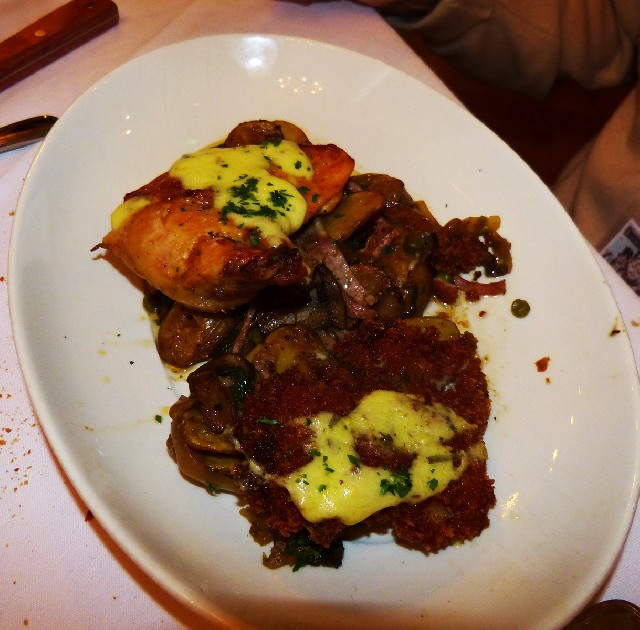 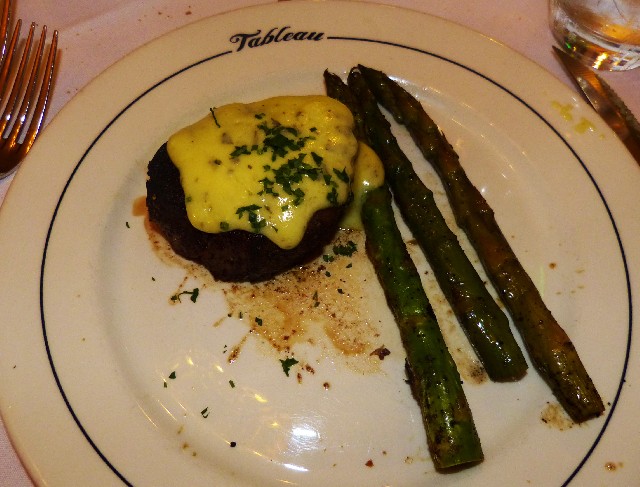 My filet was not how I had ordered.

The organizer of the conference of the American Theatre Critics Association, Alan Smason, invited members to sign up for a prix fixe dinner at the upscale Tableau prior to an evening at the venerable, nearly hundred -year-old Le Petit Theatre du Vieux Carre.

We were seeing the Donald Margulies play "Dinner with Friends." It was perhaps overly familiar to many of the ATCA critics. Some having seen several productions had mixed responses to this incarnation with a seemingly off kilter cast. The theater also proved to be noisy, there were fire works outside in Jackson Square, and distracting as audience members arrived late then came and went as they pleased.

That would seem to be more than adequate time to enjoy, what else, a dinner with friends.

Long before the event I had e mail exchanges with California contributor Jack Lyons. We had a lot to catch up on. Anne  also mentioned that she would like to join us for a table of four.

That was the plan.

The three-story, seven-dining room restaurant shares a rambling vintage building with Le Petit Theatre du Vieux Carre. In 2011, the board of governors of the financially strapped playhouse sold 60 percent of the property to the Brennan restaurant group for $3 million. The 365-seat main theater remained in the hands of Le Petit, which shares a lobby and courtyard with the new Brennan restaurant.

The sale allowed the theatre to pay off outstanding debts, and undertake an overdue renovation of the facility. The Brennan group, a dynasty of restaurateurs, obtained one of the French Quarter’s premier properties, situated on the site of the historic residence of Manuel Gayoso, the last Spanish governor of Louisiana. The Brennans used Spanish style for the chic decor. The building, a 1960s reproduction, provides a view of Jackson Square from the outdoor balcony dining area.

The Brennan Group also operates Bourbon House, Dickie Brennan’s Steakhouse and Palace Café, all in the French Quarter. We enjoyed breakfast several times in Bourbon House with considerable pleasure. Our visit to Palace Café, , which we will report on separately, was well, rather dismal.

It was a long walk through the French Quarter to reach the restaurant from our Crowne Plaza Hotel at the corner of Canal and Bourbon streets.

Problems started from the moment we entered the restaurant.

The woman assigning tables appeared to be overwhelmed even though it was early for the evening dinner service. The vast three story restaurant was virtually empty.

Still our ATCA group appeared to be scattered to the winds.

We saw groups of colleagues here and there.

A staff member led us to Siberia tucked into an odd spot behind the bar.

It was a large table with more than four seats but we waited for Jack and Anne arriving separately to join us.

Instead two women from the conference, who we did not know, were seated with us.

Becoming concerned I went to the front desk to locate our friends.

We were informed that the ATCA group was seated on all three floors and that a large rehearsal dinner group was expected.

On the second floor I found a number of ATCA folks, the majority, in a mid sized dining room dubbed The Library.

Jack was at one table and Anne at another.

Asking Jack what was going on he replied that this was where he was told to go.

Flagging down a manager I stated that this was unacceptable. After some annoying resistance, as if doing me a huge favor, a table for four in that room materialized.

I went down stairs to get Astrid while Jack graciously moved over to our new table.

By the time we were seated the other tables had ordered.

It was now after 6 PM. But no worries we had lots of time.

Astrid informed the waitress that she was gluten free so that limited options.

Jack and I started with the seafood gumbo while she ordered a salad.

Having been in New Orleans for several days of course I had enjoyed lots of gumbo.

So I was curious as to how it would be prepared in an upscale restaurant.

It was OK. Nothing special and overly salty.

The saucer of miniscule salad served to Astrid was an insult.

Come on. You mean you can't provide a more substantial salad? It's just lettuce for cripes sake.

Astrid ordered fish grilled and was assured that there was no breading. While Jack selected chicken.

Most of the other tables were ordering dessert when our meals arrived at ten minutes of seven. That left forty minutes for entrees and desert. The theatre was just across the lobby.

Cutting into my meat it was scorched and well done.

I informed the waitress that this was not what I had ordered.

She insisted that I had ordered medium well done.

There was none of the controversial "pink" that she heard me say.

I insisted that all my life I have Always ordered medium rare. I have never, ever, ever ordered a well done steak.

It became a battle of wills.

Whatever happened to the notion of pleasing the customer?

She offered to refire it.

No problem she insisted you have lots of time.

Several times asking her what gives?

The clock kept ticking and ticking.

Astrid and Jack had finished their meals.

Other tables were leaving.

At about 7:20 the meal arrived. A manager standing over me imperiously insisted that I cut into it.

It takes, like seven minutes to fire a medium rare? This was an agonizing half hour. Particularly as I informed the inattentive waitress that we had a curtain to make.

Astrid said you shouldn't have sent it back adding that clearly my order went to the back of the line.

This is just not how things are done at an upscale restaurant. We were paying around $30 plus each for that prix fixe.

Jack had wine but we didn't.

Bolting down the steak there was like five minutes for dessert.

If only I had the time to truly savor it. Jack also enjoyed that dessert.

With just minutes to curtain there was yet another fiasco.

The waitress screwed up our checks.

We accompanied her to a station where she had to redo them. Good grief. We finally settled.

There was like two minute before closing house doors.

I had to pee. Managed to.

Once seated Jack and Astrid also answered the call.

With the play starting I had super agita that I would be watching it by myself. All of the other mishaps were piling up to the breaking point.

This is not conducive to an enjoyable evening of theatre.

No worries as they soon joined me.

On our last night in NOLA our buddy Fast Eddy organized a group to return to Tableau.

There was no way we were submitting ourselves to another evening of expensive abuse.

It seems that the second time round our pals found it disappointing. Fast got into a beef with the maitre 'd and threatened to storm out.

Or so we were told.

We enjoyed that last wonderfully romantic meal at Marti's.

Several of our friends said that it had been their favorite NOLA restaurant.

Much as we love Fast Eddy and the kids no way Jose that we would ever return to Tableau.

Do by all means try it if you don't mind being treated like a know nothing mark from out of town.

Whatever happened to Southern Hospitality?