Bertolt Brecht’s The Life of Galileo 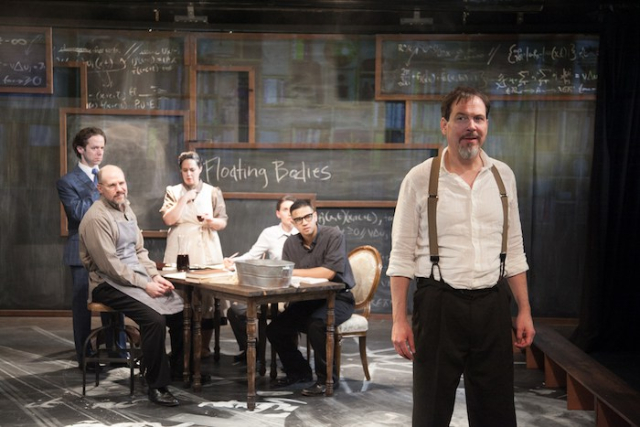 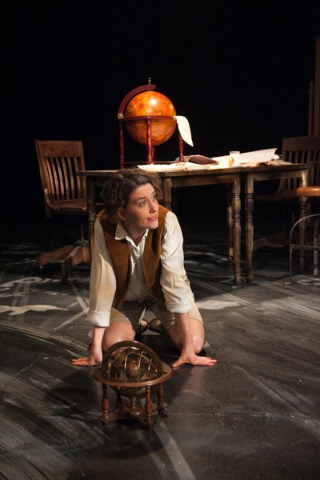 Remy Bumppo Theatre calls itself “think theatre.” And there couldn’t be a better tagline for this company, which takes on some of the most intellectually intriguing scripts in the theatrical library. Their recent productions of Caryl Churchill’s Love and Information and Tom Stoppard’s Travesties are examples.

Remy Bumppo’s new production of Bertolt Brecht’s The Life of Galileo is the powerful story of the famous mathematician whose findings about the structure of the universe defy church teachings. His story is supremely relevant today because it poses crucial issues such as science vs. religion and government control of expression.

The production is directed by Nick Sandys, the theater’s artistic director. Sandys was smart to choose the new David Hare translation of the Brecht script. It’s more colloquial and conversational and thus easier to stick with than the older translations. Because, let’s face it. Galileo the man was brilliant but the Galileo of Brecht is talky, ponderous, and sometimes repetitive in his charmingly anecdotal explanations of the world as he found it to be.

Shawn Douglass as Galileo convinces us he is a real man of pluses and minuses, not a cardboard historical figure. We live with him through the wrenching changes in his life, through his delight at making discoveries and teaching about them, his conflicts with the church about the Ptolemaic vs. Copernican views of the universe; and his miseries as an underpaid teacher. Most painfully, we watch him recant his beliefs in scientific truth so that he can continue his work, even though circumscribed by the edicts of the church. (He was found guilty of heresy and sentenced to house arrest.)

In an early scene, Galileo shows young Andrea (a boy played by female actor Kelsey Brennan) an instrument of the ancients, a Ptolemaic astrolabe. The boy explores its rings and globes, which represent the earth as the center of the universe, as taught by the church of Rome. For 2000 years, Galileo exclaims, everyone has believed that we live at the center of a crystal globe. “But now everything is moving. At last we are able to say, just because something is so does not mean that it will remain so forever.” Always the creative teacher, he uses a washbasin and a chair to demonstrate the movement of the earth to Andrea. But he cautions Andrea not to discuss these ideas with anyone.

And thus Galileo sets up for Andrea, and for us, the nature of his lifelong conflict with the church.

Galileo is not always an admirable character. Ludovico (Caleb Probst), a visitor interested in learning about science, tells him about a new tool from Amsterdam; it’s a tube with two types of glass at each end that can enlarge the scene you view through it. Galileo is excited and creates one for himself, which he presents as his invention, the telescope, to the leaders of Venice.

Galileo has students and colleagues about him throughout the 2.5-hour production. They alternately celebrate and mourn the changes that their teacher and mentor suffers. Galileo’s colleagues include Federzoni, his lensgrinder (Todd Michael Kiech); Fulganzio, the little monk (Kevin Mathew Reyes); and Andrea Sarti (Brennan, who also portrays Andrea as a young man). Ludovico, a member of a wealthy landed family, becomes engaged to Galileo’s devoted daughter Virginia (Susaan Jamshidi), who happily prepares for the wedding. But Galileo’s work and his views cause a breach with Ludovico’s family and Ludovico deserts Virginia before the marriage can take place.

The Life of Galileo is a powerful, thought-provoking story and this production is enhanced by Joe Kiug’s creative scene design. The set is a simple workroom surrounded by blackboards, on which are projected the time and place of each scene—Padua 1609, Florence 1610, Rome 1616—as well as images and diagrams.

The time-stamping of scenes moves forward and contemporary dates are added to the 17th century identifiers: California 1936. New Mexico 1944. Washington DC 1947. It was not clear at first what the contemporary dates symbolized but they all take place during the time period when Brecht was writing the play. However, the dates also seemed to be making a connection with J. Robert Oppenheimer, the atomic scientist who was first honored, then repudiated by his government. Sandys’ literary biography of Brecht in the playbill acknowledges that Brecht, who lived in the US for six years while he was in exile from Nazi Germany, was aware of Oppenheimer’s work.

Projection design is by the ubiquitous John Boesche, whose thoughtful projections are an art form in many productions in Chicago and elsewhere. When Galileo recants his scientific views, we see him making his statement on a television screen.

Another star of the Galileo crew is Stephanie Diaz, who created the clever puppet show in act two that dramatizes the science-faith conflict in Punch and Judy fashion.