Program to Stream Past Performances 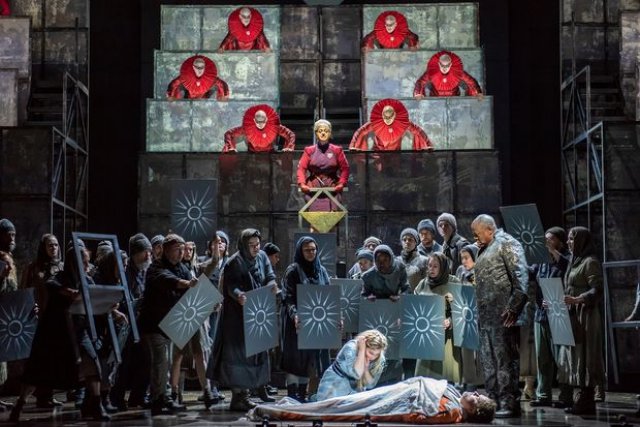 Bard explored the music of Erich Korngold in the summer of 2019 and is now offering his opera, Das Wunder Der Heliane on their site.

Richard Strauss, after reading compositions Korngold wrote at age 11, was astonished. “The assurance of style, this mastery of form, this...expressiveness.” The score for Heliane astonishes in its masterfully composition, with both a loveliness reminiscent of Strauss himself and new ventures into dystopian harmonies and melodies. Set in an unspecified location at an unspecified time, the emotional arc moves from torture to transformation.

Heliane is the story of a woman who refuses to succumb to her husband, The Ruler. Instead she falls in love with The Stranger delivering joy to the oppressed subjects. The Stranger is to be executed for his popularity with the populace. Dressed in an orange suit we have come to associate with at Abu Ghraib, Daniel Brenna radiates The Stranger’s goodness in his bright tenor. He is momentarily redeemed when The Ruler catches his nude wife in The Stranger’s prison cell. The Stranger is to live long enough to bear witness to Heliane’s adultery at trial.

Heliane’s strip before the prisoner echoes Salome’s dance in Strauss’ opera. The composer also suggests some of the kinkiness of Salome’s desire, as sweet as Heliane is. Heliane’s music is soft and filled with the lighter woodwinds and chiming percussion. Ausrine Stundyte sings the title role with a pleasing kindness colored by rich tone lusters.

The focus of the drama is on Heliane, her husband and the prisoner. Feelings are expressed in the musical lines, both sung and orchestrated. While death hangs over every scene, we do not fear for the principals. None of them seem weak enough to quash. In portraying their strength, the composer has laid the groundwork for transcendent moments to arise.

Curiously the tale feels also like a retelling of Christ’s death on the cross. A sword with crossed hilt sits on center stage for much of the production. Heliane like Mary Magdalene seduces The Stranger, but clearly by invitation. Whether the characters are dead or alive is left indeterminate. Christ of course is ever present in spirit after his death and resurrection.

Christian Räth has taken on a tough directing job. Although there is emotional drama at almost every moment, there is little action. The orchestra provides the most engaging movement forward. Leon Botstein at the helm conveyed his enthusiasm for the work in each note he drew forth.

Räth is immeasurably assisted by Esther Bialas, the set and costume designer. Six units smoothly moved to create a prison, a courtyard and a courtroom, providing action. These units consisted of open stacked perches and stairways, which offered an opportunity to create memorable images. Six judges with huge red collars bend forward, arms akimbo and eyes terrifyingly fixed on the proceedings. The Ruler’s desire for his virgin wife and his frustration and fury that she will not be his are transmitted from his throne with the passion of Othello. Alfred Walker sings The Ruler role with terrifying threat. It was difficult not to imagine Heliane strangled and smothered.

Thomas C. Hase’s lighting also adds drama, focusing on shocked arms and pleading gestures to color the scene. Costume colors were also enhanced by light. Catherine Galasso was inspired by the music to move dancers during the prelude to the third act, a spectacular musical and dramatic scene.

The supporting cast is first rate. David Cangelosi as the blind judge gave a stentorian hint that Justice might be rendered. Jennifer Feinstein gave a wicked and yet seductive cast to the melodic lines of The Messenger.

The impact of terror on individuals and the populace is felt strongly in the story and music. Other worldly rewards may no longer tempt in the 21st century, but the orchestra gave us plenty of hope as The Stranger and Heliane rise to immortality.  Listen to the gorgeous music sung by a talented cast.