Bang on a Can Marathon 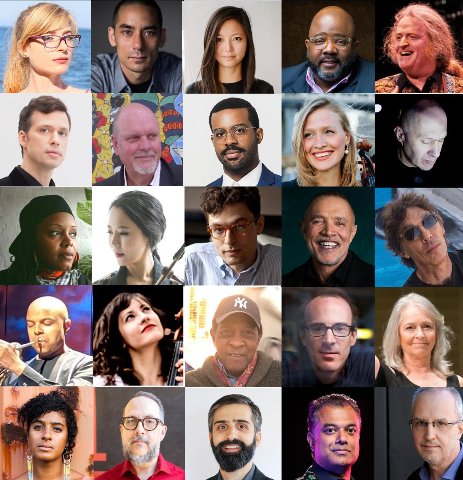 Bang on a Can announces the hourly schedule for its next Bang on a Can Marathon – Live Online – on Sunday, April 18, 2021 from 1-5pm ET. All 15 pieces on the program will be world premiere performances of newly commissioned works, streamed from musicians' homes around the country and across the world. Over its first six live online Marathons in 2020-2021 (May 3, June 14, August 1, October 18, February 21, and March 21) Bang on a Can has presented more than 125 performances, including 47 world premieres of new commissions and over 150 composers and performers. Bang on a Can plans to continue these Marathons, streaming online at live.bangonacan.org, as long as the closure of presenting venues continues, and perhaps beyond. The four-hour live Marathon will be hosted by Bang on a Can Co-Founders and Artistic Directors Michael Gordon, David Lang, and Julia Wolfe, who say:

This concert is FREE!  But please do consider purchasing a ticket. That helps us pay more players, commission more composers, and make more music.

The pandemic is still here. An entire ecosystem of composers and performers needs our attention, our love, and our financial support!  All Marathon performers and composers are participating live and being paid by Bang on a Can.

Bang on a Can April 18, 2021 Marathon Performance Schedule

Every piece on the program is a world premiere of a newly commissioned work. Set times are approximate and subject to change.

Rudresh Mahanthappa How Was Your Year? (world premiere) for Ken Thomson

Soo Yeon Lyuh See You on the Other Side  (world premiere)

Dynamo composer/percussionist Andy Akiho premieres a brand new piece for himself to play.  Andy is a virtuoso of the steel pan, the instrument originally invented out of discarded 55 gallon oil drums in Trinidad and Tobago in the 1930s.

Coming to us all the way from Russia, Anton Batagov is a mystic of the piano.  Part shaman and part showman, beneath his fingers the keys of the keyboard reveal another world, another layer of spiritual energy, and another way of listening. Here he performs his new work, Chaconne in A minor.

Carman Moore is a legend.  Composer, performer, conductor, author.  He was the music critic for the Village Voice in the early 1970s, when new music exploded in downtown New York, and we needed his smart, patient, public advocacy.  He has made a practice of using music to build bridges among people, faiths, and cultures.  And for this performance,  his new work STALLION will build a bridge between species with the help of Bang on a Can All-Star bassist Robert Black.

Joan La Barbara is an icon of the experimental music world.  Her original experiment was her own voice, expanding her range to explore multiphonics, ululation, the subtleties of her own breath.  She turns her experimental spirit towards all the music she makes, including her new piece ad astra...for cellist/singer Iva Casian-Lakos.

Jonathan Bailey Holland honors American political themes with his graceful, elegant music.  For this Marathon, he turns his skill and attention to Bang on a Can All-Star guitarist Mark Stewart.

Kelly Moran is a composer, performer, producer, and technologist.  She makes her meditative and spacious music at the intersection of keyboards and technology, often preparing a piano by placing small objects between its strings, and then bathing its distorted sound in waves of ambient electronics.

The music of composer, singer and multi-instrumentalist Leyla McCalla is a powerful mix of many influences.  In her songs – and in her new work, Meditation #1, for cellist Arlen Hlusko – you can hear her training in Western classical music, her Haitian background, her research into American and Creole roots music has led to a vibrant solo career as well as collaborations including the project Songs of our Native Daughters and her time as a member of the Carolina Chocolate Drops.

Matana Roberts is a composer, saxophonist and mixed-media artist. Roberts works in many contexts and mediums, including improvisation, dance, poetry, and theater.

Composer Michael Abels has been writing music for a long time.  But he catapulted into our consciousness almost overnight with his beautifully subtle and terrifyingly dynamic scores for the hit films “Get Out” and “Us.”  For this performance he is composing a new work, Anguish from “Falling Sky,” for the Bang on a Can All-Stars pianist Vicky Chow.

There probably isn’t an orchestra in the world that hasn’t played a piece by Michael Daugherty.  Known for his ear, his wit and his imagination of how instruments work together, he turns all his skills towards this new composition, Six Riffs after Ovid, for oboe superstar Titus Underwood.

Michael Fiday’s music is direct, spare, forceful, and energetically in your face. For this Marathon he teams up with master of the low reeds, Jeff Anderle, with a new work entitled Song for Eric.

Rudresh Mahanthappa is a groundbreaking composer/saxophonist.  For many years he has been pushing the boundaries of where his music can go, by tempering jazz improv with structures taken from experimental music and compositional strategies from music of other cultures, including his own South Indian Roots. He is composing a new piece entitled, How Was Your Year?, for the Bang on a Can All-Stars’ clarinetist/saxophonist Ken Thomson.

Composer/performer Soo Yeon Lyuh brings her musical virtuosity and deep knowledge of traditional Korean music into the 21st century, and beyond, with her unbelievable mastery of the haegum, the Korean 2 string spike fiddle.

Timo Andres is both a virtuoso composer and a virtuoso pianist.  One skill feeds the other – in both you can hear the commitment to detail, to clarity, to the command of his technique, and to the honest presentation of the music.  He brings us in a new work entitled House Calls, for French horn, played by another virtuoso, David Byrd Marrow.

Bang on a Can All-Star Arlen Hlusko, a brilliant cellist with a powerful sound and a deep commitment to community engagement through music, teams up with the multi-faceted composer/cellist Leyla McCalla on her new work, Meditation #1.

Bang on a Can All-Star percussionist-drummer-producer David Cossin is a superstar specialist in new and experimental music. For this performance, he premieres a new work, Persuasion, by fellow drummer John Hollenbeck.

Cellist Iva Casian-Lakos is known for both her virtuosity and interdisciplinary versatility from classical cello to boundary-stretching new works, involving choreography, singing, acting, improvisation, and more. Composer Joan La Barbara puts her unique skills to work with a new piece, ad astra…, for Iva to perform on cello and voice.

Bay area master of the low reeds, Jeff Anderle is a foremost performer, commissioner, and advocate for new innovative music and a member of Sqwonk, Splinter Reeds, and Edmund Welles. Here Jeff will premiere a new work for bass clarinet, entitled Song for Eric, by composer Michael Fiday.

Bang on a Can All-Star and reed guru Ken Thomson is a passionate performer and also a composer increasingly known for his harmonic and rhythmic complexity and a punk-rock aesthetic. He will be performing a brand new work entitled How Was Your Year? by composer/saxophonist Rudresh Mahanthappa.

Bang on a Can All-Star and musical wizard Mark Stewart is a virtuoso guitarist, singer, instrument inventor, who plucks, bows, beats, and breathes life into countless sound-making devices. For this performance he will premiere a new work by Jonathan Bailey Holland.

Spectacular founding and current Bang on a Can All-Star, bassist Robert Black tours the world constantly creating unheard of music for the solo double bass. On this Marathon he teams up with legendary composer Carman Moore for the premiere of his new work, STALLION.

Titus Underwood, principal oboe of the Nashville Symphony, is on a mission to open your ears and mind to what the oboe can do. Titus will perform the world premiere of Michael Daugherty’s brand new Six Riffs after Ovid, for solo oboe.

Vicky Chow, powerhouse pianist of the Bang on a Can All-Stars, premieres a brand new work, Anguish from “Falling Sky,” by composer Michael Abels.

About Bang on a Can: Bang on a Can is dedicated to making music new. Since its first Marathon concert in 1987, Bang on a Can has been creating an international community dedicated to innovative music, wherever it is found. With adventurous programs, it commissions new composers, performs, presents, and records new work, develops new audiences, and educates the musicians of the future. Bang on a Can is building a world in which powerful new musical ideas flow freely across all genres and borders. Bang on a Can plays “a central role in fostering a new kind of audience that doesn’t concern itself with boundaries. If music is made with originality and integrity, these listeners will come.” (The New York Times)

Bang on a Can has grown from a one-day New York-based Marathon concert (on Mother’s Day in 1987 in a SoHo art gallery) to a multi-faceted performing arts organization with a broad range of year-round international activities. “When we started Bang on a Can, we never imagined that our 12-hour marathon festival of mostly unknown music would morph into a giant international organization dedicated to the support of experimental music, wherever we would find it,” write Bang on a Can Co-Founders Michael Gordon, David Lang and Julia Wolfe. “But it has, and we are so gratified to be still hard at work, all these years later. The reason is really clear to us – we started this organization because we believed that making new music is a utopian act – that people needed to hear this music and they needed to hear it presented in the most persuasive way, with the best players, with the best programs, for the best listeners, in the best context. Our commitment to changing the environment for this music has kept us busy and growing, and we are not done yet.”

In addition to its festivals LOUD Weekend at MASS MoCA and LONG PLAY, current projects include The People's Commissioning Fund, a membership program to commission emerging composers; the Bang on a Can All-Stars, who tour to major festivals and concert venues around the world every year; recording projects; the Bang on a Can Summer Music Festival at MASS MoCA, a professional development program for young composers and performers led by today’s pioneers of experimental music; Asphalt Orchestra, Bang on a Can’s extreme street band that offers mobile performances re-contextualizing unusual music; Found Sound Nation, a new technology-based musical outreach program now partnering with the State Department of the United States of America to create OneBeat, a revolutionary, post-political residency program that uses music to bridge the gulf between young American musicians and young musicians from developing countries; cross-disciplinary collaborations and projects with DJs, visual artists, choreographers, filmmakers and more. Each new program has evolved to answer specific challenges faced by today’s musicians, composers and audiences, in order to make innovative music widely accessible and wildly received. Bang on a Can’s inventive and aggressive approach to programming and presentation has created a large and vibrant international audience made up of people of all ages who are rediscovering the value of contemporary music. Bang on a Can has also recently launched its new digital archive, CANLAND, an extensive archive of its recordings, videos, posters, program books, and more. Thirty-three years of collected music and associated ephemera have been digitized and archived online and is publicly accessible in its entirety at www.canland.org. For more information about Bang on a Can, please visit www.bangonacan.org.