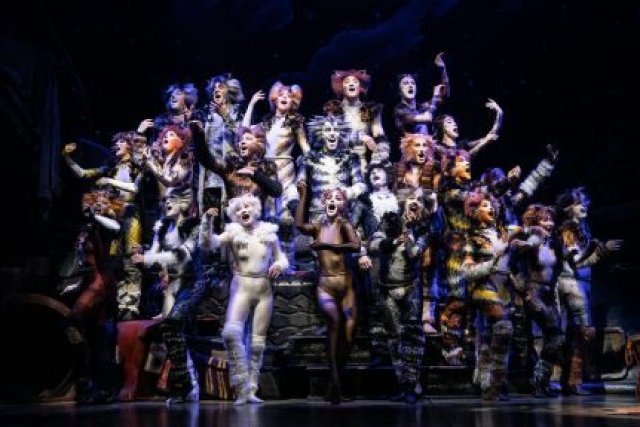 Even after more than four decades, these felines still prove to be sharp-minded, mischievous, nimble, and even wise.

However many times you have seen them, or even if you are seeing them for the first time, chances are they will touch you in some way.

The musical phenomenon, Cats, is the fourth-longest running show in Broadway history, and the winner of seven Tony Awards. It may be heading to a city near you. As I write this, a fine national, non-equity touring production is finishing up a run in Ft. Lauderdale. It will then head north.

If you are new to Cats, its basis is T.S. Eliot’s 1939 poetry book titled “Old Possum’s Book of Practical Cats.” The show’s songs consist of Eliot’s verse which Andrew Lloyd Webber set to music. Cats is unusual in its construction; along with Eliot’s poems, music and dance are the show’s main focus. The musical lacks a traditional narrative structure or linear plot. In terms of genre, Cats combines elements of the revue and concept musical.

The setup: A tribe of cats called Jellicles gather in a junkyard, under the night sky complete with a moon, for their annual Jellicle Ball. During this event, they decide which one of them will ascend to the Heaviside layer (their version of heaven) and be reborn into a new life. During the bulk of the musical, the contenders for rebirth either introduce themselves, or a fellow feline. Also, they tell us about themselves, mostly in song.

While Cats is not a musical with a traditional structure, it still presents acting, dancing, and singing challenges for performers. Indeed, they must prove to be triple threats while in character. And to their credit, cast members of the current national touring production shine. Clad in costumes and makeup, these performers sometimes crawl, while at other times they walk. This can serve to symbolize that these creatures possess animal and human traits.

For instance, while cats do not require as much attention as, say, dogs, they still desire connection. Of course, so do us humans, if the pandemic has taught us anything.

In Cats, no other character demonstrates the need for connection more than Grizabella. At one point, she was glamorous, youthful, and fit in well with the other Jellicle Cats. However, for a reason that this show does not make clear, at some point Grizabella’s fellow Jellicles shunned her. And, no longer wanted, she left the tribe.

For the show, she appears as an old and mangy cat. Without a doubt, she is lonely and longing for connection and acceptance.

If you have heard of only one song from Cats, chances are it is the hauntingly memorable “Memory.” In the show, Grizabella sings the song to recall her memories of her youth, when her fellow Jellicles treated her as part of the tribe, and she felt wanted.

In this production, with a strong and expressive voice that beautifully conveys a sense of longing and melancholy, Tayler Harris pours her heart and soul out while singing “Memory.” Her rendition earned sustained, enthusiastic, and well-earned applause during the reviewed performance.

Meanwhile, another old timer, “Gus,” suffers from palsy. Naturally, he is no longer a terror to mice or rats. Actually, “Gus” is short for “Asparagus,” his real name. As his face reveals a sad expression, his eyes blink multiple times as his caretaker, Jellylorum, tells of Gus’s exploits. Soon, Gus’s eyes widen, brighten, and a twinkle appears in them as he recalls his past as an actor. Actually, his fellow Jellicles call him “Gus: The Theatre Cat.”

As John Anker Bow plays him, Gus fondly recalls, among other things, performing Shakespeare and remembering by heart 70 speeches.

One of the leading roles is a cat named Old Deuteronomy, yet another aged feline. He is a wise old cat who “has lived many lives.” His task each year at the Jellicle Ball is to choose which Jellicle will experience rebirth. While it is not essential to the show, it would be nice to know what criteria Old Deuteronomy uses to decide. Alas, Cats does not tell us. In this national touring production, Indalecio De Jesús Valentín portrays Old Deuteronomy with dignity.

Among the younger cats, there is Bustopher Jones. He is a fat cat in “a coat of fastidious black.” Jones is among the elite of the group. He visits prestigious gentlemen’s clubs. Bow, one of the actors portraying multiple roles, plays Jones with a joyfulness and contentedness.

The youthful cats also include Rum Tum Tugger. He is a “flashy and unappeasable cat who loves to be the center of attention.” A nimble Zach Bravo playfully portrays Rum Tum Tugger.

Other cast standouts include a flashy Paul Giarratano as Mistoffelees. He is a young black-and-white tuxedo tom learning to control his magical powers. Also, an animated Nick Davis portrays Munkustrap, the show’s main narrator. Actually, Davis is an understudy. He went on for the reviewed performance in place of regular actor, Devon McCleskey.

John Napier handled the scenic and costume design. It includes an authentic-looking moon in a starry night sky and a junkyard on the ground. Why a junkyard? When Napier first created the set in November 1980, he “planned to create a complete environmental space for the show that took the audience into a world which uses real objects to conjure up fantasy, that they may at first find slightly disorienting and perhaps make them wonder what is going to happen – and how.”

As for the costumes, Napier followed the hints in Eliot’s text. Specifically, he blended the cat and human elements. Also, each cat has individual make-up. This helps project each character’s personality.

Under Mick Potter’s sound design, it is easy to hear the performers, and different noises sound real.

A vibrant-sounding live orchestra accompanies the performers. They possess pleasant, strong, and expressive voices. The performers not only sing, but believably convey the emotions behind Webber’s memorable, diverse songs. Some are haunting, while others are more upbeat. In addition to singing, they skillfully execute the often-acrobatic choreography. Andy Blankenbuehler designed the choreography, based on Gillian Lynne’s original choreography.

Even with Cats’ rather thin premise, the musical carries a message. Beyond the obvious one that cats are more like us than we may think, the show, through Grizabella’s character arc, leaves us with the message that ostracizing or excluding someone is rarely, if ever, a good idea. But even if you have shunned somebody or did something you later regretted, second chances are often possible.

The non-equity national touring production of Cats, which is playing Ft. Lauderdale’s Broward Center for the Performing Arts through Sunday, April 10, might be coming to a city near you. For tour and ticket information, go to https://ustour.catsthemusical.com/tickets.