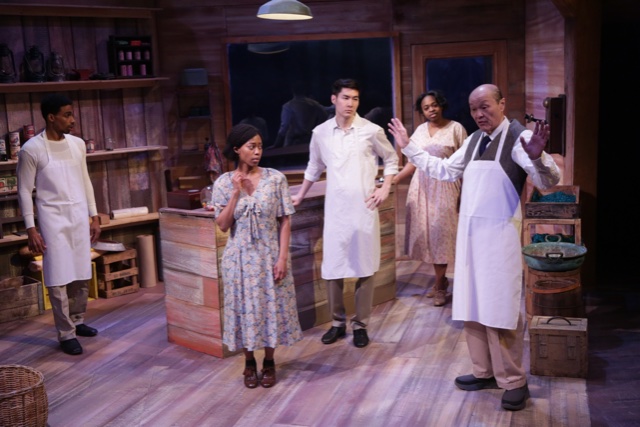 We are taken in by Chris Cumberbatch's set which evokes the 1920s. It is the simple home of Mississippi sharecropper, the interior of the town's general store and the store's back sitting room. The world is still Jim Crow's.  We can peek into  to the the lives of those oppressed by the system, both the African Americans and the newly arrived Chinese immigrants.

With lighting by Victor En Yu Tan, and Kathy Robertson's simple but  mindful costumes, the slow comfort of a small southern town unfolds. White's characters are likable as they go through their daily tasks. The story is the friendship, romance and marriage of Joe Ting ( Eric Yang) son of  Mr. Ting (Henry Yuk) the Chinese immigrant owner of the general store, and the African-American school teacher, Lucy Sims (DeShawn White) who is teaching Joe English.

This quiet personal  story is set against the back drop of the  court case of Gong Lum. This actual case wound its way through the Mississippi courts all the way to the Supreme Court. The case, brought by Mr. Lum, asked that  his daughters to be allowed to attend the white school rather than the colored school. The basis for the case was the inferior quality of the schools designated for colored children.

The Court ruled against Mr. Lum. Indeed Mr. Lum sent his daughter north, finding that that there were few options available in Mississippi. It was not until 1954, that Brown v The Board of Education of Topeka, Kansas held that "separate is not equal" was upheld by the Court.

In the 1920's we were  a long way from  recognizing the legal rights of those designated as second class citizens. Mr. Ting hopes that the Gong Lum case might put the Chinese in a better  position in the racial hierarchy. The marriage  of his son to a African-American  woman  reveals Mr. Ting's racist views.  The support of the couple's choice by Lucy's brother Melvin (Anthony Goss) and friend Loretta (Alinca Hamilton) play off against Mr. Ting's outrage.

The personal hopes  that these  people have for the future are slowly crushed by the social construct they inhabit. Joe and Lucy refuse to have their love  destroyed.  Lucy's brother Melvin remains hopeful that he can  find a way to change his  his own life as a sharecropper and looks to  Mr. Ting for employment.

Although Mr. Ting likes the Sims family and  has many colored neighbors as customers,  he sees his own social position as threatened by his son's marriage. The burden of the Ting family's own precarious position,  legal vulnerability, isolation and desperate desire to prosper are revealed.

The importance of family and the cultural  expectations of the Chinese are sensitively portrayed.  We come to understand that both the Chinese immigrants and their African-American neighbors  are being kept in their place by the white legal authority. The bigoted laws preclude their social and financial success. Mr. Ting fears that his own legacy, the general store, will be lost if his grandson is a black man. His distress turns into rage as he lashes out at his son and threatens to have him deported back to China. Like the eponymous Gong Lum, emigrating  north presents the only viable option for the young couple. Their legacy cannot be assured in Mississippi.

Life in the quiet Mississippi delta town is up-ended  by great flood of  the Mississippi in 1927.  The river swelled to a 80 mile width, devastating the agricultural delta. Hundreds of thousands of African Americans fled north. The Sims and Tings must look for new avenues in which to build their legacy.

Charles L. White's script allows us to see the ugliness of Jim Crow tear apart the Ting family.  This warm and heart felt piece gives us a chance to reflect upon the  'little ways' in which  these laws and Jim Crow “norms”  destroy the natural  bonds of family.

Gong Lum's Legacy follows the long tradition of the New Federal Theatre's revealing the human dramas behind our sociological and political platitudes. The legal restrictions and social abuse suffered by Chinese (and other Asian immigrants)  is not a story often told  in popular venues.  The role of  the civil rights movement in  elimination of the  premises of legal segregation for all Americans it is a tale well told on New Federal's stage.

Playing at Theatre of St. Clements in New York through April 24.  Tickets here.
Back to Front Page Section Home