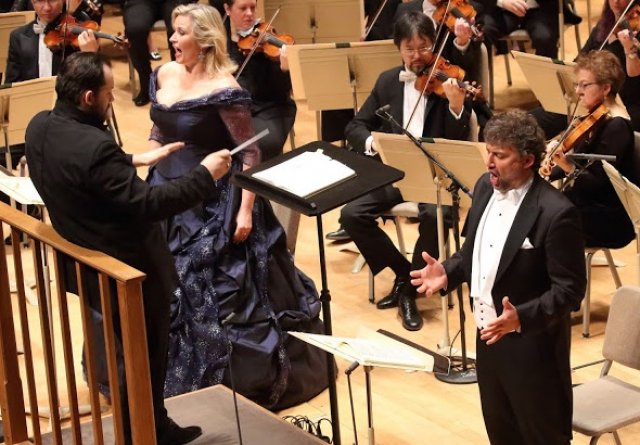 It might be his good looks. It might be his magnetic stage presence. It might be his voice.  Or it might be his rash of cancellations at the Metropolitan Opera in the last few seasons. Either way, tenor Jonas Kaufmann, who hasn't sung Wagner on a New York stage since 2013, has a fan following. They were out in force at Carnegie Hall on Thursday night to hear him sing opposite Camilla Nylund, the Boston Symphony Orchestra and music director Andris Nelsons in a concert performance of Act II of Wagner's Tristan und Isolde.

Kaufmann has essayed Wagner before, singing Siegmund in the first run of Die Walküre in the Met's messy Ring Cycle and the title role of Parsifal (in a much better production) in 2015. He's also built a reputation singing the title role of Lohengrin. However, Tristan is a whole other level of challenge, belonging to the heavier side of the already challenging Wagner roles for the tenor voice. (Only Tannhäuser and Siegfried are harder to sing.) This is damned difficult stuff, even if you're skipping the outer acts which hold the most punishing passages. Here, he seemed unsettled at his entrance, moving rapidly onto the stage as if fighting the storm surge of orchestration that greeted his arrival. His opening shouts of "Isolde! Geliebter!" sounded forced.

Opposite him, Nylund offered her own hurricane of sound.  She was at her most impressive in the early passage where Isolde argues with Brangäne (mezzo Mihoko Fujimura) and then extinguishes the torch, summoning her paramour to their midnight tryst. When the big duet started, she proved variable in her attack as she negotiated the big, difficult icebergs in the score. Hers is a big instrument that turned unwieldy in tight corners and lost any attractive color in the first half of the duet. Between them, Nelsons conducted: a Wagnerian Ulysses sailing between Scylla and Charybis.

Happily, the two singers found their respective centers for "O sink' hernieder, nacht der liebe." The orchestration is more forgiving, and the two soloists brought a warmth and tenderness to this lush music, which sounds as radical today as it did at the opera's 1864 premiere. Mr. Nelsons slowed the accompaniment here, drawing rich, diaphanous textures for this music, revealing that for all his bombast, Wagner knew how to write a vocal line.

This idyll would not last, as Brangäne uttered ominous warnings from her offstage watch-tower. Here, Fujimura was confined to an anteroom stage right, with a direct view of Mr. Nelsons. (In a concert performance, this moment is more effective if the singer can intone this slow passage from a spot in the balcony!) Still, this intense watch song brought the color of dread to the idyll, warning the rapt audience of the onset of the act's final phase.

The rude awakening came in the person of three more singers. First up:  David Kravitz as Kurwenal. (That's a great part in the opera house but here he only sings one line.) Then, character tenor Andrew Rees as a brash and nasal Melot, a Frank Burns-like fink who indicates Tristan's betrayal. Finally, bass Georg Zeppenfeld entered as King Marke, Tristan's uncle and Isolde's husband. Zeppenfeld proved to be the great discovery here, singing his doleful music with a powerful and limber bass instrument that had weight, authority and dusky tone.

Nelsons drew forth out the clarity and inventiveness in Wagner's orchestration and unrolling the appearance of the famous "Tristan chord" for the final words between the lovers. In the passage where Tristan sings of the twilight land of death, a queendom he would give to Isolde, Mr. Nelsons and the ensemble seemed to open a door between the worlds, stepping outside the continuity of opera and stopping time itself. When time resumed, it did so in the brutal, slashing chords that end the act.