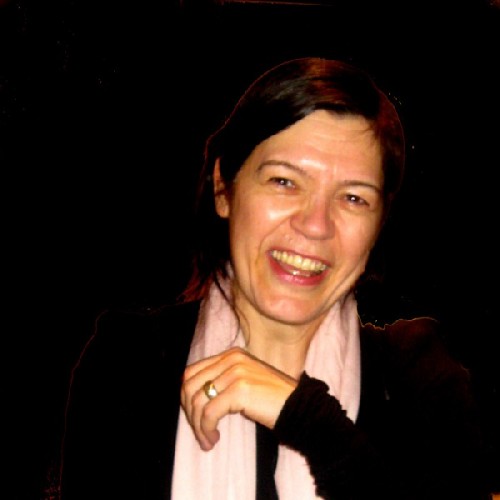 Ute Meta Bauer is the director of the new program in Art, Culture and Technology at MIT. Giuliano photos. 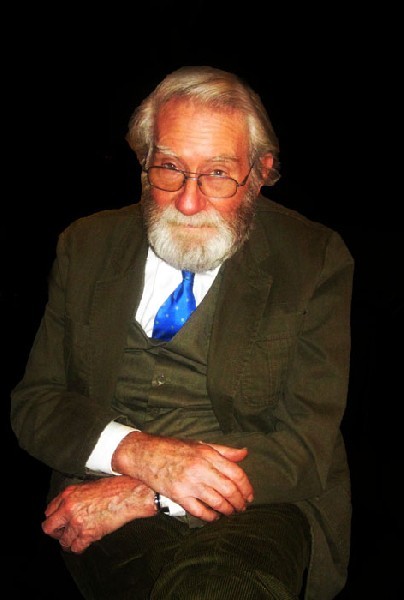 Otto Piene the former director of the Center for Advanced Visual Studies at MIT. 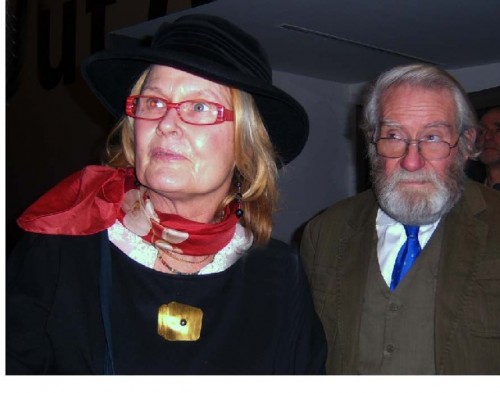 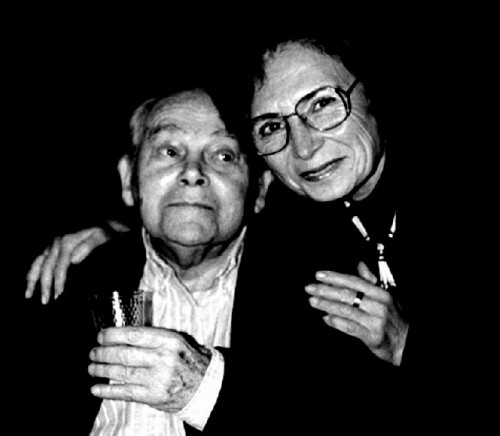 Gyorgy Kepes the founder of CAVS with Zeren Earls. 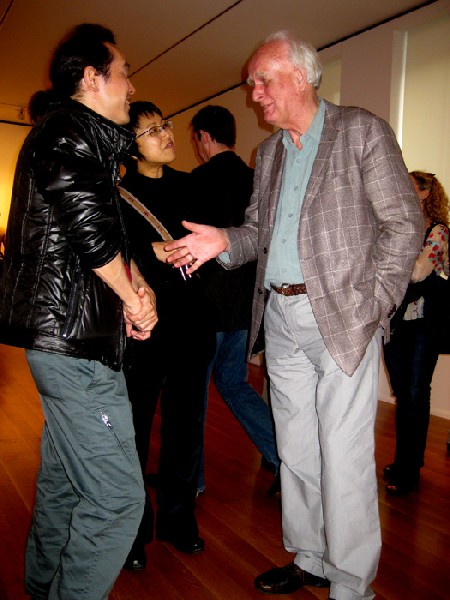 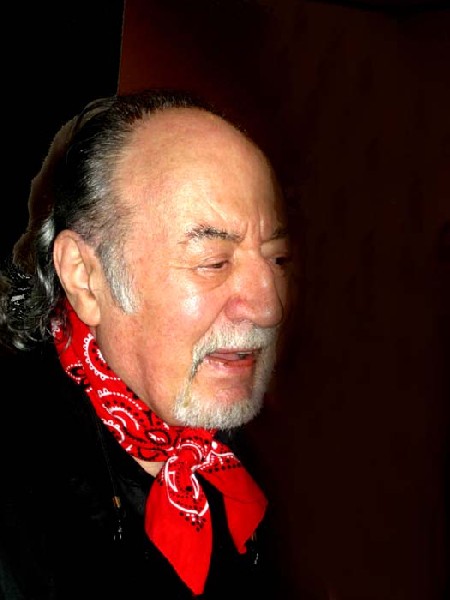 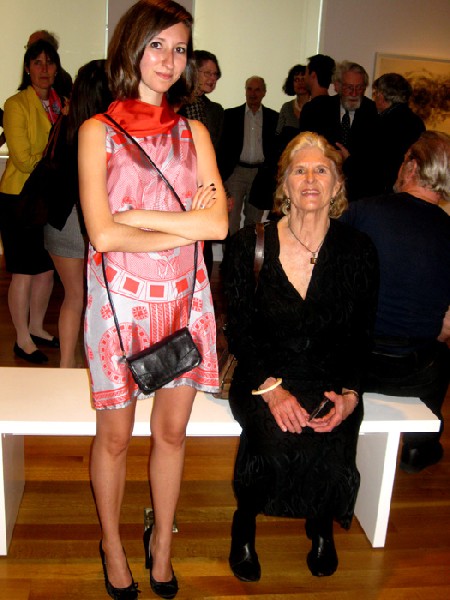 A recent gallery opening for Otto Piene's 'Light Ballet Fire Paintings, 1960 - 1967, at Sperone Westwater, in New York City, became a reunion of sorts for former Research Fellows and graduate students, of MIT's Center for Advanced Visual Studies (CAVS). They had been appointed by Otto Piene, while he was director of the Center from 1974 to 1993.

A conversation at the vernissage with Ute Meta Bauer sparked this article. She is the director of the newly inaugurated program Â– ACT - at the Massachusetts Institute of Technology:

ACT stands for Program in Art, Culture and Technology and has its home base in the Media Lab Complex, a brand new building by the architect Fumihiko Maki. It is adjacent to the Wiesner Building on the East Campus of the Massachusetts Institute of Technology (MIT). Under the auspices of the School of Architecture and Planning, it brings together the MIT Visual Arts Program (VAP), in existence since 1989, and the Center for Advanced Visual Studies (CAVS), whose founding director was Gyorgy Kepes in 1967.

Professor Kepes and the MIT Arts Council, the School of Architecture and Planning, the President's Office, and other entities at MIT worked together to create this early Center for Art and Technology  at the university, where solo and collaborative exhibitions and projects were initiated. Kepes envisioned collaborations between artists, architects, engineers and anyone open to a new creative process.

Building W11, on the West campus, a corner building at Massachusetts Avenue was home to CAVS for more than 25 years. Yearly, less than ten appointed international Research Fellows were working in large studios during the Kepes years. When Professor Piene followed as director in 1974, teaching schedules, activities and work expanded dramatically, and a commitment for 'art on a civic scale' remained.

The sizable director's office and meeting room became the CAVS exhibition and meeting space. Piene and staff moved into small inside offices and over time Fellows doubled and tripled to share studios with graduate students. A Master of Science in Visual Studies Degree had been initiated in the 1980s (MSVisS). At the height of CAVS' artistic work, research, teaching, and studies, ten graduate students and thirty-five Research Fellows/Affiliates were appointed per semester or year. The Center was bursting at it seams, but also teaming with activities. Not everyone had a studio at CAVS and the international group of artists remained mobile, depending on each individual's projects and commitments. During the first ten+ years of Piene's directorship more than 100 solo and group CAVS exhibitions and projects were initiated by him and Fellows. Or, the Center, as it was usually known, had been invited to take part in or create national and international exhibitions and conferences. Center artists traveled to exhibit in many parts of the US and countries in Western Europe.

Professor Meta Bauer has received internal assistance by a librarian and a student of library studies to catalog and register all material and report on conditions of the extensive CAVS archives. A current visiting scholar has been driving the original video tapes, some dating back to the 1960s,  to a New York City facility in order to transfer them to DVDs. Further assistance has recently been offered, but funding is urgently needed to continue this mostly volunteer effort. Likewise, a selection of videos of the past twenty years, made by the faculty of the Visual Arts Program and former MSVisS students has been compiled and will be distributed nationally.

When Piene stepped down as Director of CAVS in 1993 MIT moved the Center to a location on the North side of campus, close to the MIT Museum. CAVS had long become a work place for art, science, and technology and Steve Benton, a scientist and holographer took over the directorship. The focus turned to artists collaborating with scientists, video/film/animation, and holography. The graduate program was suspended, but courses and seminars open to students campus-wide remained.

After Benton's untimely death Krzysztof Wodiczko was appointed in 2004 to lead the Center. The emphasis shifted to investigations of relationships among science, technology, and contemporary culture and short-term visiting artists and scholars enlivened the debate. Wodiczko will now direct the Interrogative Design Group, combining art and technology into critical design.

The Visual Arts Program (VAP) was established in 1989 by Dean John de Monchaux of the School of Architecture and Planning. Its first director, Ed Levine and Fellows' media were: Video and sound, photography and design, performance, and other experimental phenomena. The MSVisS degree program, which had ended with Prof. Piene's retirement, was reinstated at VAP. Associate Professor Ute Meta Bauer, a well known curator, has been at its helm since 2005.

ACT's first director is Meta Bauer and MIT's press release reads as follows: Under the leadership of curator and Associate Professor Ute Meta Bauer, Director of the Visual Arts Program since 2005, the new program will partner undergraduates, graduates, fellows, and faculty in thematic clusters at the intersection of art, culture, science, and technology.  And Meta Bauer stated:" The Media Lab is famous for working in thematic clusters of that sort, and more and more we are moving in that direction too."

Dean Adele Naude Santos, of the School of Architecture and Planning, made the following statement:"We see the visual arts as an essential component of offerings. The creation of this new program, combining the efforts of two historic endeavors, reflects our commitment to the growing importance of the visual arts at MIT. In addition to giving the arts a higher profile on campus and in the city, the program's signal position in our new building will put its faculty, students, and researchers in daily contact with their counterparts at the Media Lab, and at the many other centers and programs in the complex, enhancing everyone's efforts."