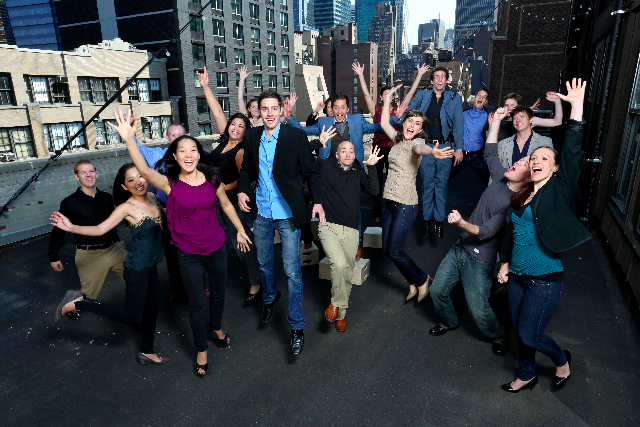 Aaron Copland's Quiet City opened the program. It was written as incidental music for an experimental play by Irwin Shaw.

A trumpeter is the prominent herald in the Copland and Charles Ives pieces that followed.  In the Quiet City Copland aimed to evoke the "inner distress" of a young trumpet player who imagined the night thoughts of many different people in a great city. The trumpet evokes motifs and is musically at the fore in the transcendent journey of protagonist.

For the second piece on this evening's program, ACJW chose the composer Steven Mackey's Micro Concerto. Mackey heads the music department at Princeton, and is a musical omnivore.

Micro Concerto was composed in 1999 for a large battery of percussion instruments. In a short witty introduction prior the performance, Caleb van der Swaagh, cellist of the ensemble, explained the artist's inspiration for the Concerto as well as drawing the audiences' attention to the importance and vast artistic resources of the percussive media. The sound idea is gathered around the small orchestra comprised of flute, clarinet, piano, violin and cello and large family of percussive instruments such as vibraphone, tom-tom, claves, and bongos.

Fascinated by the enriched world of percussion sounds and techniques, Mackey attended a workshop on cymbal playing. In his piece, he incorporated the elaborate spiel with the timbres and brought sound spaces together.

The music's improvisational aesthetic reflects the composer's early grounding in rock and pop idioms, so it is not surprising to find ourselves in a jam session in the first movement. All three movements are intertwined with a lyrical interludes when instrumentation is reduced. The spectrum of Micro Concerto sounds "macro," as sound expands in bongos that build the flow of the music.

Determined rhythm in percussion dominates through rhythmical patterns that contribute to the illusion of the more massive expression juxtaposed with the smaller orchestra and its smaller precise sound. A dialogue between marimba and cello crowns the concept of the composer's "play" in the world of percussive instruments and an alternate way of introducing the sound using multiple objects.

Charles Ives's The Unanswered Question followed intermission. This popular piece dates from 1908, when the composer was conflicted between the use of tonality and atonality. He raised the question of existence in the trumpet, which was played from afar, in the balcony of Weill Hall.

Philip Glass has become comfortably familiar and his recognizable musical idiom and aesthetics no longer surprise us. It was refreshing to hear his fifth quartet, dedicated to ensemble Kronos Quartet, on a concert program of a young ensemble. This piece is twenty five years old which is  about the age of the musicians.

ACJW had an opportunity to express their musicality in wide melodies in violoncello. The crucial ability of rhythmical preciseness, honoring every slight change in accentuation, maintained the "flow" of a repetitive process.

This promising ACJW ensemble, performing American composers and celebrating the 125th anniversary of Carnegie Hall, bodes well for the future of classical music.