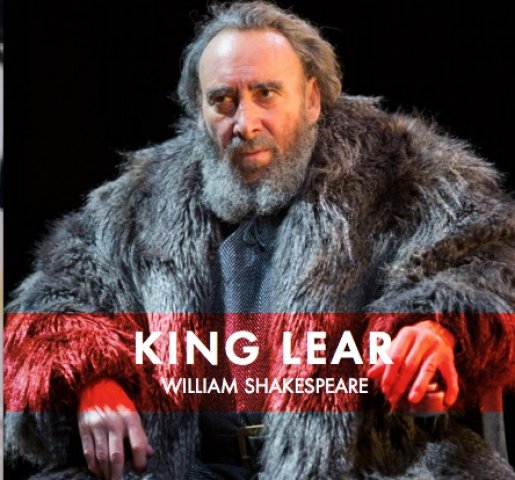 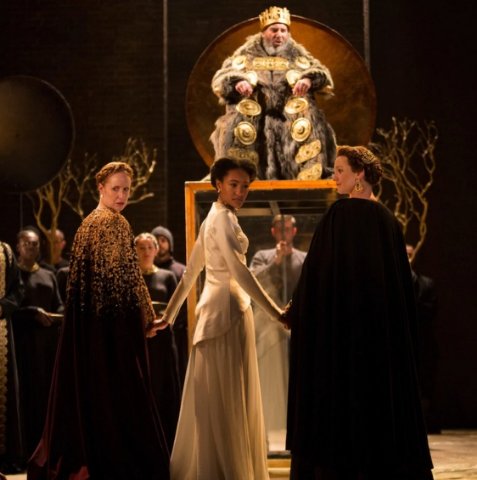 King Lear enters to bestow property on his daughters 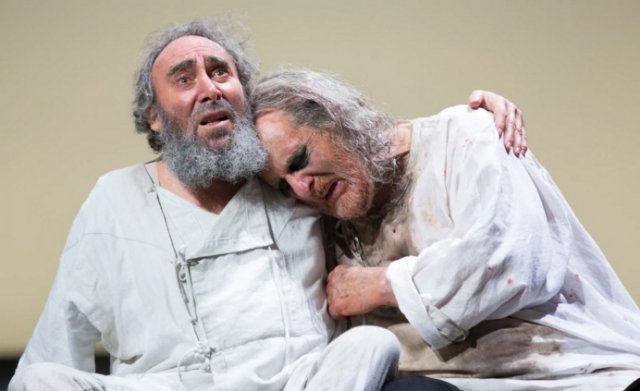 Antony Sher and David Troughon as Lear and Gloucester

King Lear enters in a Pope Mobile, held on high by porters.  He is wearing a coat as big as a bear's skin and bedecked with medals and jewels. Every bit the King, he is about to abdicate.  Famously, he intends to divide his kingdom between his three daughters.  His favorite, a truthteller, disappoints and does not get her share.

This glass box will allow outsiders to share the play's events.  It is most strikingly used for Gloucester's imprisonment and torture.  As his eyes are gouged out, blood is wiped on the glass box's walls.

In Antony Sher's take on the role, Lear divests himself of authority as well as land.  Faced now with relationships which reveal the true characters of not only his daughters, but his friends, his allies and a wise, poetic fool he meets along the way, Lear is stripped to his essence.

Costumes are particularly important in this production.  Niki Turner, who also created a spare but apt set, creates at first the royals dressed in the trappings of power.  Lear in thick furs, his daughters Goneril and Regan in gold-encrusted gowns and capes that sweep about them as they tell their father what he wants to hear in order to get their share of the estate.

The women will wear simpler black as the play reveals their true characters.  The stripping for Lear is to a simpler coat and then a loose jacket and pants and finally his underwear.

Gregory Doran directs to strip, moving ever more deeply into the heart of each character.  While Lear declares himself mad, he never seems so. He rages as a force of nature in the midst of a thunderstorm.  He enjoys the Fool's jokes, his language and his insights.  Sher plays Lear's reaction to his daughters' manipulative cruelty more as a furious disappointment in his own lack of judgment when he was lost power than a descent into insanity.

Sher's delivery of lines is conversational. We seem to meet a real human being in the catch of words in the throat, in the rumbled phrases that pour out as emotion takes control of the voice.

The humorous incidents throughout the play bring unaccustomed, laugh-out-loud moments .  Graham Turner as the Fool not only paces his insights perfectly, but has physical gestures which become his dance.  Sher picks them up when he declares his own madness, but the assessment and the movements are a joke.

James Clyde as Regan's husband, the Duke of Cornwall, has subtle but effective hand movement across his chest and back.  We follow the close attention he pays to action which he is observing. A slight shift of the brow, and straining, urgent eyes emphasize changing moods.

The final scene between father and daughter Cordelia, played by Mimi Ndiweni in an elegant and ineffably moving moment, brings tears to her eyes as well as ours.

What Samuel Beckett may well have found in this play is tipped off in a late scene by an almost bare set, with a small tree in the back of the stage, and a cane lying on the ground.  Suddenly you realize that the movement has been from a rich tapestry of external power and authority to the powerful place of individual souls struggling to survive.

Local citizens from New York are used to play knights, vagrants and hunters.  Silhouetted in a line they look like an Ingmar Bergman procession. The music is lofted as the trumpets of power, drumbeats, and an occasional tune which fits the period mode.

There is no shying away from sex and violence, two critical elements in Shakespeare. They are an integral part of Gregory Doran's brilliant direction.