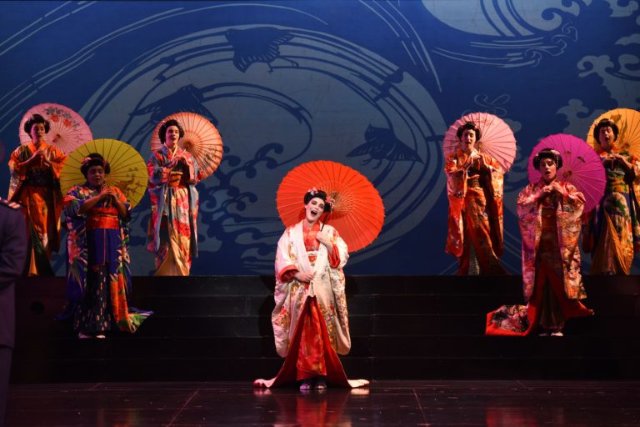 One of the most esteemed opera composers of all time, Giocomo Puccini’s venerated middle period is comprised of only three works. Composed at four-year intervals from 1896 to 1904, each is among the most appreciated and performed in the whole canon of the genre.

First was the beautiful, sentimental, and lyrical La Boheme. The gritty and haunting verismo opera Tosca followed. Finally, Madama Butterfly not only incorporated the finest attributes of the first two, but added the unique and exotic intersection of Japanese and American cultures. Replete with Japanese folk melodies composed in pentatonic scale, Puccini’s musical palette is at its richest with the inclusion of the oriental motifs, in addition to his unexcelled penning of beautiful vocal music.

.For the novice, Madama Butterfly represents a fine introduction to opera. Few operas possess such melodic music from beginning to end. At the same time, it offers a story with cross-cultural and historic interest with well-defined and developed characters. The conclusion is full of dramatic and emotional power.

The experienced opera goer may suffer one of those “been there, done that” episodes in advance of the performance. But the apprehension should melt away within a few minutes of the opening curtain when one realizes what a wonderful work it is. Perhaps the biggest complaint is that by contemporary short-attention-span standards, the opera could be shortened a bit. Prime candidates would be the orchestral interludes before and after the second intermission. Notwithstanding that they are beautifully composed, they don’t advance the narrative.

Opera San José has mounted a stunning production of Madama Butterfly. Maria Natale leads the cast as Cio-Cio San, or Butterfly, with a remarkable performance. For those who are unfamiliar or have forgotten, this is no Tinker Bell role, although it does contain beautiful lyric pieces such as the aria “Un bel di vedremo” (“We will see a beautiful day ”) and the lovely flower duet with her maid Suzuki, “Scuoti quella fronda di ciliegio.” (“Shake the cherry tree”)

With exception of a few minutes at the beginning and near the end of the production, Butterfly graces the stage the whole time, and her singing dominates the action. What’s more, much of it demands dramatic power that belies the delicacy of the character and her youth, as she is 15 years of age when she marries the American Naval Lieutenant Pinkerton. Natale hits her stride in “Viene la sera,” (“Evening will come”) the beautiful love duet with Pinkerton in Act I, that runs the range from poignant to rhapsodic to menacing. She commands the role throughout with great vocal acuity, having both lovely tone and robust intensity.

Tenor Dane Suarez as Pinkerton displays heroic lyricism in all of his highlights. His duets with Butterfly “Viene la sera” and “Bimba dagli occhi pieni di malia” (“Girl with charming eyes”)  as well as his duet with the United States Consular Officer Sharpless “Addio fiorito asil” (“Goodbye noble flower”)  are praiseworthy. Suarez captures the smarmy, self-serving affect of Pinkerton that makes him such a despicable character, yet his owning up for his bad deeds, along with his remorse and  cowardice are also well acted.

The full cast excels. In the major supporting roles, Renée Rapier’s deep and warm mezzo suits Butterfly’s loyal servant Suzuki with exceptional sensibility and complements Natale’s soprano. Trevor Neal’s smoky and booming baritone as Sharpless conveys his sincerity and the anguish that he feels for the naive and vulnerable Butterfly. Finally, as the marriage broker Goro, tenor Mason Gates gives another rock solid rendering and further demonstrates his versatility as a singer and performer.

Stage director Brad Dalton pulls together a distinct and effective ambiance for the production. Kent Dorsey’s dark, stark, and spare set design foretells the sadness on the horizon, and lighting designer Pamila Z. Gray’s focused lighting creates additional drama. The total effect impedes the observer from building any optimism concerning where the story is headed.

One treatment that detracts from the intimacy of the atmosphere is the opening sequence. Four naval men standing before a backdrop of bold, horizontal red and white stripes is reminiscent of the beginning of the movie Patton. Along with the depiction by supernumeraries of  a barfly hustling sailors, the points are understood, but they jar and suggest that the audience would not catch onto the underlying themes of militarism, ethnic condescension, and prostitution without this display.

Nonetheless, this is a top quality production that brings out the best in this masterpiece – another credit to Opera San José.