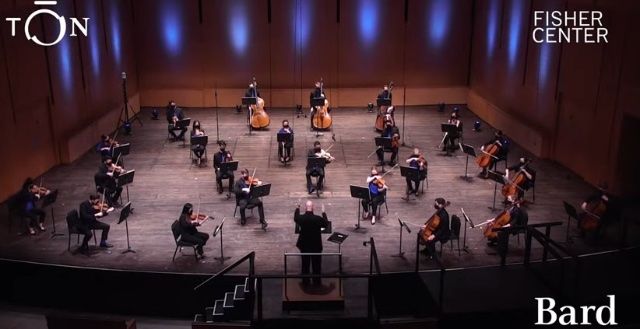 Bard makes consistent and crucial contributions to our understanding of music and the world around us.  Those of us who have been fortunate to enjoy seasons of opera productions are aware of Bard’s outsized awakenings.. Seldom produced operas get a deserved hearing. They are created with consummate taste and style. Hiring artists to teach. Challenging students to think for themselves and then contribute to society. The list of accomplishments goes on and on.

The Orchestra Now, created in 2015, is one of the shining accomplishments of Leon Botstein, Bard’s President.

A recent program, available here, offered music designed to engage the ear and help it travel to new insights. This was the seventh live performance of the 2020-21 season.  Players wore masks and were distanced.  So too the audience.  The air sizzled with post-pandemic hope.

The program first offered Tania Leon’s Acana. Cuba is Leon’s country of birth and its dance rhythms and percussive beats are heard throughout the work. Like her mentor, Leonard Bernstein, native sounds make up the varying textures and motifs of the work. The Acana is a 90 foot tree with wide-spreading roots. The music pictures life, particularly birdsong, weaving through the branches with the wind.

Blair McMillen took on the piano role in Stravinsky’s Concerto for Piano and Wind Instruments.  Two largo movements precede an Allegro finale. The work in the hands of McMillen and TON holds captivating jazz rhythms and stride moments.

Felix Mendelssohn’s Third Symphony, known as the Scottish, was composed during Mendelssohn’s Grand Tour, his first trip away from his family and his home in Berlin. We are reminded that melody is a welcoming element of music. Leon Botstein, conducting, brought melody out in all four works.

All the works are based in complex rhythms that TON played with precision and  exuberance. All of them pick up folk songs and marches, some funereal.  All of them also explore the outer limits of the scale, particularly in bell-like, tinkling tops.  These elements were made more clear to the listener as they crop up in the works, one after the other.  This is where the brilliance of the programming becomes apparent.

Bard also has mastered streaming. The double screen when the cello and violin were playing a duet was effective. The blue back stage lights matched the blue of the performers shirts.  Camera movements enhanced the performance.

TON's next live performance is on May 1st in Annandale-on-Hudson.