An Encore by Goodman Theatre 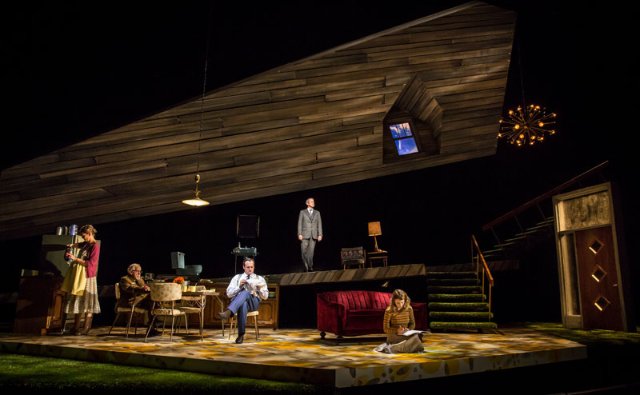 Violet is pregnant with twin boys, due to arrive soon. She talks and sings to them constantly, introducing them to their family and friends and to their lives to come —and so does everyone else. Their father, Daniel, speaks to his wife’s belly: “Good morning, gentlemen” and whispers to them. Their sister Beauty smiles. The Colonel, their grandfather, tells his future grandsons, “The greatest possible act of courage is to love and anyone who says different is an asshole,” thus setting up the play’s theme.

That’s how we meet the main characters in Noah Haidle’s sweet and painful play, Smokefall, directed by Anne Kaufman, staged by Goodman Theatre in 2013-14, and now streaming as part of Goodman’s Encore series. Smokefall’s message is that love and pain are inevitably paired. (“Every love story is a tragedy and its ending is built into its beginning.”) Haidle portrays this tragic love story with three generations of a family in Grand Rapids, Michigan, who we meet in various eras. There’s more than a little fantasy and magical realism going on here but Haidle blends it into the family story.

Violet (Katherine Keberlein) cheerfully sings to her boys as she prepares breakfast for the Colonel, her aging father (played by Chicago’s favorite actor, Mike Nussbaum, who was 90 at the time). The Colonel wears his uniform, medals and officer’s cap and follows the same routine every day—although he doesn’t always remember why or recognize his family members. Beauty (Catherine Combs), the teenage daughter, stopped talking three years ago and only eats dirt, bark, newspapers, rocks and clothing. Daniel (Eric Slater) seems cheerful and loving but is overcome by “a general sense of dread and malaise…. He survives each day through the smallest joys.”  When he leaves home this morning, he passes his office and drives west, never to return.

Footnote (Guy Massey) is a narrator who is telling us the background and emotions of the characters and their stories and memories. Footnote inevitably reminds me of the Stage Manager in Thornton Wilder’s Our Town, most likely because I have spent a great deal of time with that play in the last month, reading and reviewing Howard Sherman’s wonderful book, Another Day’s Begun, as well as watching several Our Town films and online scenes. Footnote and the Stage Manager are our representatives on stage, ensuring we follow the action.

Near the end of act one, we meet the twins, Fetus One and Fetus Two (Slater and Massey) wearing tuxes in vitro. They’re fighting, tickling, debating original sin, quoting Michel Foucault and Anna Karenina, and whether to be born or not (“it’s perfect in here … in here we’ll never know suffering, in here we’ll never grow old,” says Fetus One), appreciating their mother’s love and worried about their father’s dread. When her labor pains begin, thunder, lighting and a tornado strike. And finally, the storm begins.

In act two, the house has survived many storms and we meet future generations of the family—including Beauty, who returns as an old woman, 65 years after she left home at 16, still looking 16. Johnny (Nussbaum) is her brother, the surviving twin, who describes his own life and introduces his son, Samuel (Massey), whose bedtime stories were Heart of Darkness and Critique of Pure Reason. Tell her your first words, he asks Samuel. Hesitating, Samuel says, “Hell is other people.”

Footnote narrates the ending, as Violet arrives to fix breakfast. “She imagines the universe as a household, which is always beginning again, a circle without a cause or an end, a circle that never gets tired, and has no apparent aim—unless the aim is bliss in the circle….”

Smokefall was filmed on October 6, 2013, in Goodman’s Owen Theatre (it later was remounted in the larger Albert Theatre). Scenic design was by Kevin Depinet, lighting by David Weiner, and sound design by Lindsay Jones. Gapers Block, Chicago’s late great city news site, published my first review of Smokefall in October 2014.

You can view Smokefall on demand through 11:59pm on April 25. Tickets are free and you can register to receive a viewing link; you are encouraged to make a donation to Goodman. Running time is about 100 minutes and closed captioning is provided in English.