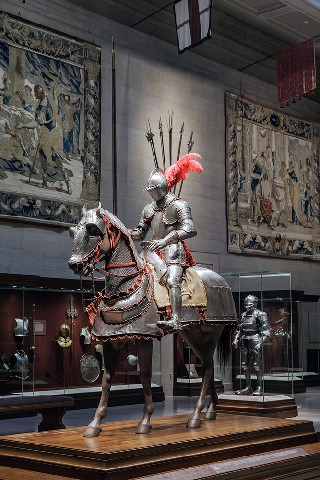 A favorite of visitors since opening day in 1916, the Armor Court of the Cleveland Museum of Art holds 400 pieces of chain mail, swords, daggers, helmets and suits of armor. Seen here is Field Armor for Man and Horse with the Arms of the VÃ¶ls-Colonna Family, made about 1575 in Northern Italy. Image courtesy of the Cleveland Museum

FOR THE BENEFIT OF ALL THE PEOPLE, FOREVER: THE CLEVELAND MUSEUM OF ART CONTINUES ITS FOUNDERS’ GLORIOUS VISION. The Cleveland Museum of Art (CMA) is one of the top comprehensive art museums in the nation, with 45,000 objects spanning 6,000 years. Internationally renowned for its substantial holdings of Asian and Egyptian art, the museum also houses significant works by Botticelli, Caravaggio, El Greco, Rubens, Goya, Dalí, Matisse, Renoir, Gauguin, Eakins, Monet, Warhol, Pollock, Christo and van Gogh. Highlights include J.M.W. Turner, The Burning of the Houses of Lords and Commons, 1835; William Sidney Mount, The Power of Music, 1847; Frederic Edwin Church, Twilight in the Wilderness, 1860; Pablo Picasso, La Vie, 1903; Albert Pinkham Ryder, The Race Track (Death on a Pale Horse) 1896-1908; George Bellows, Stag At Sharkey's, 1909; and Claude Monet, Waterlilies, 1915-1926).

RODIN UNRESTORED. The museum’s cast of Rodin's The Thinker, at the top of the museum’s main exterior staircase, was partially destroyed in a 1970 dynamite bombing, allegedly by the Weather Underground (no one was ever charged). Cast under Rodin’s direct supervision, and acquired by CMA in 1917 just after the museum opened, the statue has been left in its unrestored condition, in part to bear witness to the political unrest in the United States during the Vietnam War. The damage has come to define the CMA casting as unique among the more than twenty-five original large castings of The Thinker.

THE BEGINNINGS. The museum’s creation was made possible by three Cleveland industrialists who bequeathed money specifically for an art museum, as well as by Jeptha H. Wade, a founder of Western Union Telegraph, who donated a 63-acre parcel for the museum campus. The site, renamed Wade Park, now also contains the Cleveland Botanical Garden, the Cleveland Museum of Natural History and the Wade Park Fine Arts Garden, where a number of sculptures from the CMA's holdings are showcased. When the museum opened its doors in 1916, Wade's grandson, Jeptha H. Wade II, proclaimed it, 'for the benefit of all the people, forever.' CMA’s $750 million dollar endowment allows it to remain true to this vision, keeping general admission free to the public.

A GREAT PUBLIC GATHERING PLACE IS CREATED. May 2014 marked the official opening of the museum's new atrium, part of a $350 million dollar expansion designed by award-winning Uruguyan architect, Rafael Viñoly. As the CMA announced, “A grand, open piazza at the core of the museum complex, the atrium is a place to congregate, a source of airy light, and a reference point for greatly simplified navigation throughout the galleries.” The new east and west wings, as well as the enclosing of the extraordinary, breathtaking atrium courtyard under a spectacular 34,000 square feet glass canopy, brings the museum's total floor space to 592,000 square feet.

A WELCOME TO VISITORS. Deborah Gribbon, Interim Deputy Director for Collections, Education, and Performing Arts at the Cleveland Museum of Art, said, “If you come to Cleveland, a visit to the Museum of Art should be first on your list of things to do - indeed, seeing the newly-renovated museum is worth a trip to Cleveland!  The museum's collection is known throughout the world not just for its range - from the ancient world to the present, including works from Asia, Africa, Europe, and the Americas - but for its extraordinary quality. Everyone will have his or her own favorite, but a visitor shouldn't miss the Armor Court, a great hall filled with chain mail, swords and suits of armor.  If you like impressionism, you should be sure to see Claude Monet's extraordinary painting of Waterlilies.”

MUSEUM PARTICULARS. The Cleveland Museum of Art is located at 11150 East Boulevard, Cleveland, Ohio. The Museum is working to establish the provenance of European paintings and sculptures in its collection to determine if any works were involved in the systematic art plunder by the Nazis. Results of the research will be published beginning this year on the museum’s web site at clevelandart.org/research/in-curatorial/provenance-research. The Museum is also home to the Ingalls Library, one of the largest art libraries in the United States. For more information about the museum, its holdings, programs and events, call 216-421-7350 or visit www.ClevelandArt.org.