A Trilogy of One Act Operas 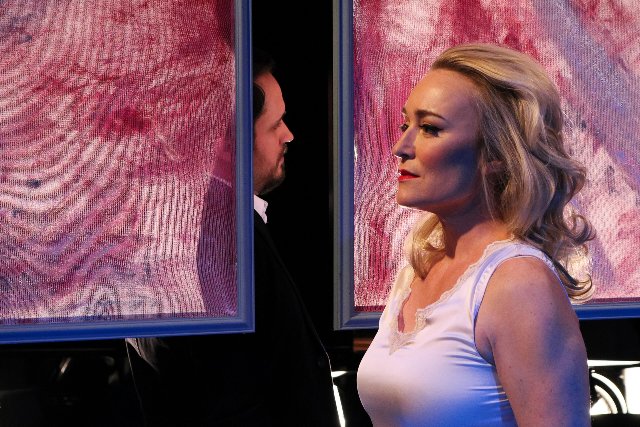 What a pleasure to see Bay Area opera companies offering alternatives to traditional live performance productions until we are able to return to the opera houses to experience their magnificence as intended.  Following its streaming production of “Three Decembers” by Jake Heggie, Opera San José now offers a curated trilogy of one-act operas.  Marital relationships, or more loosely, love constitutes the common bond among the trio.  With each requiring only two singing parts, they are highly conducive to the strictures of pandemic era productions.

The outcome is splendid.  All of the stellar performers excel in their singing and acting artistry, and director Tara Branham takes advantage of the assets that the electronic medium has to offer opera.  Yes – there are some pluses to opera production designed for film.  Mobile cameras allow different perspectives rather than the fixed point of view in a theater.  Close up shots add an appealing intimacy, and these artists thrive in the visual immediacy.  Blocking varies more, as singers needn’t have concern about projecting voice forward toward the audience.  And staging has been scaled to more realistic proportions than the stage filling requirements of a theatrical setting.

The three operas frame the 20th century, embracing widely different styles.  The anchor to the program, both in terms of its place in the repertoire and its length, is Wolf-Ferrari’s charming Italian opera buffa from 1909, “Il Segreto di Susanna.”  It opens the program, but as the only comedy, it might be better positioned as the closer, to leave the audience more upbeat at the end, just as “Gianni Schicchi” often closes Puccini’s “Il Trittico.”  Joining “Il Segreto” are the more brittle mid-century American “Four Dialogues” by Ned Rorem, and finally, from 1993, another American entry, the brief and melancholic “The Husbands” by Tom Cipullo.

The one-trick plot line of “Il Segreto di Susanna” is straightforward.  Bubbly young bride Susanna has been surreptitiously smoking, and when husband Gil returns home to smell the smoke, he fumes, assuming that she has a lover.  Even when Susanna thinks she has confessed to her transgression, Gil thinks she’s admitted to an illicit relationship rather than smoking.  Thus, they argue at cross purposes.  The light comedy is disrupted by Gil’s rage scene, which turns into an unlikely opera event, a hilarious pillow fight.

Musically, the opera holds to the 19th century Italian tradition of great lyricism and melody, with a pleasant score, highlighted by the harmonious duet “Dear memories” and Susanna’s aria “What a joy to follow the blue spiral.”  Vanessa Becerra is sweet as Susanna and uses her bright voice and delicate vibrato to good effect.  Efraín Solís pairs well as the righteous, jealous Gil, and a strings plus piano chamber orchestra provides a lush backing to a delightful rendition of this little gem.

“Four Dialogues,” which composer Rorem based on the poetry of Frank O’Hara is cleverly comprised of four short vignettes representing the episodes in a relationship, from chance meeting through romance, marriage, and unfortunately, dissolution.  The tight formula with everchanging character affect and musical treatment encapsulates the life cycle of a couple. Although its musical idiom is generally modern opera form, the sultry duet “You’re burning like fire” is melodic and quite captivating as sung by Marnie Breckenridge and Carlos Enrique Santelli.  “And my heart is going gray” provides an appropriate melancholic conclusion.

Tom Cipullo’s “The Husbands” is a sad and mysterious reminiscence set to an excerpt of William Carpenter’s poem “Rain.”  Ashley Dixon plays a widow on a bus tour in New England along with other widows.  Their lives are full of routine exchanges about their children and children’s children and deceased husbands and the doleful existence of ordering extra meals at restaurants for lost soulmates.  Eugene Brancoveanu plays a man who the widow communes with, seeming at first to be a local observer and then transitioning into the spirit of the husband. Together, the couple contemplates eternity in the poignant conversation.

Each opera in the program is well-staged – an ornate drawing room for “Il Segreto,” and hanging artistic panels as backdrop for “Four Dialogues” and “The Husbands,” but with distinguishing props. Placement and movement are thoughtful throughout.  One (Ingmar) Bergmanesque symbolic moment of note appears in the dissolution scene of “Four Dialogues” with a close up of the couple in profile, facing as if toward each other but actually in different planes and looking past each other. The lighting in “The Husbands” is particularly absorbing, playing on the autumn red tree leaves in the outdoor scene and isolating the characters from the world around them.

The domestic trilogy pleases and compels.  Much credit goes to Opera San José for translating these pieces to film with great skill.  One enhancement would be to provide some connective tissue with introductions to the operas and explaining their selection and development.

“Love and Secrets: A Domestic Trilogy,” comprised of “Il Segreto di Susanna” composed by Ermanno Wolf-Ferrari with libretto by Enrico Golisciani, “Four Dialogues” by Ned Rorem based on the poetry of Frank O’Hara, and “The Husbands” composed by Tom Cipullo with lyrics by William Carpenter is produced by Opera San José and streams online through May 15, 2021.