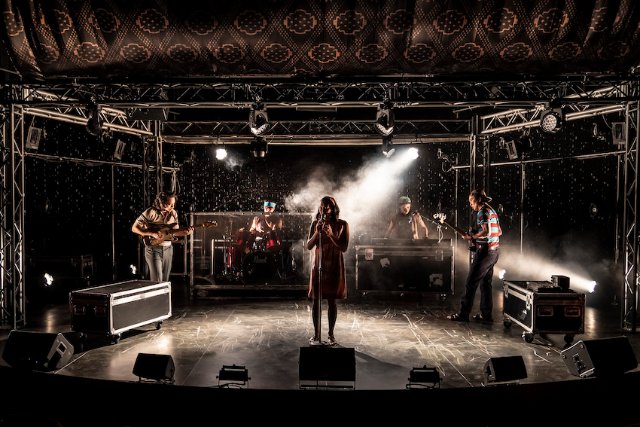 Cambodia’s violent and genocidal past doesn’t sound like a story that will have you leaving the theater smiling. But Lauren Yee manages to create a small miracle with her brave, heartwarming and funny play Cambodian Rock Band. She tells a story from Cambodia’s 1970s era ruled by Pol Pot and the Khmer Rouge and laces it with joyous Cambodian rock music, played by a live band on stage made up of musicians who double as victims and villains. (Although some of Yee’s story is fiction, it’s firmly based in history.)

Victory Gardens’ new production, directed by Marti Lyons, skims across two time periods—from present-day Phnom Penh to a 1975 Cambodian prison. Neary (Aja Wiltshire), a Cambodian-American, works for an NGO on the case of one of the leaders of the Khmer Rouge genocide, which resulted in the deaths of nearly two million people—nearly one-fourth of Cambodia’s population. Her father Chum (Greg Watanabe) arrives from the States to celebrate Cambodian New Year—and to convince his daughter to go home. You can still go to Cornell law school, he reminds her. Neary’s boyfriend and coworker Ted (Matthew C. Yee), a Thai-Canadian, assures her that her father would be proud of her achievements if she would only talk about them.

Scenes from Phnom Penh today and the 1970s prison, where Chum was imprisoned and tortured, are interspersed with music by the on-stage band playing songs by the west coast band Dengue Fever, who combine Cambodian rock and oldies with pop and surfer music from the ‘60s and ‘70s. One of the scenes shows Chum as a young bass player with his 1975 Cambodian band recording tracks for an album they hope to have produced—before the Khmer Rouge erases all music—and musicians.

Duch (Rammel Chan) was Pol Pot’s chief torturer and head of S21, the grisly Cambodian prison where 20,000 were killed. Duch, a charming and debonair host, introduces the story, occasionally steps in as narrator, and lurks in the background of every scene. He’s also there in the prison scenes as commandant and torturer. Chum’s friend and former bandmate, Leng (Matthew C. Yee) is there too–as a prison guard.

When Neary presents her father with information about his own fate at S21, he at first denies her findings, saying, “you are American. and I raised you better than this. I raised you not to care.”

Duch was arrested nine years ago and still hasn’t gone on trial. Chum explains why: “Cambodia don’t want a trial! …. haven’t you ever wondered why, 30 years, they never arrest anyone? why Duch’s trial is the FIRST? because the government, the police, the Prime Minister of Cambodia is all former Khmer Rouge!”

The six performers in director Lyons’ crew are superbly cast. Most of them play multiple roles and all six are musicians. The band is made up of guitars, bass, keyboards, percussion and vocals. Matt McNelly is music director and Mikhail Fiskel is sound designer. Lyons’ nimble direction keeps the flow from era to era moving smoothly and successfully merges the music with the drama. The musical finale brings all six on stage to play two danceable and tappable songs.

Yu Shibagaki is responsible for the bare-bones scenic design of metal framing with various-sized gig cases serving as furniture. Lighting is by Keith Parham and costumes by Izumi Inaba.

You’ll be warned when you enter that the music may be loud—and you may be offered ear plugs. But really, it isn’t very loud. Of course my hearing has been affected by decades of attending really loud rock concerts, so I may not be a good judge. But be assured that although the sound isn’t string quartet level, it’s not really loud.

The band Dengue Fever will perform at Lincoln Hall, 2424 N. Lincoln Ave., on Wednesday, May 1. More info and tickets here and here.

Cambodian Rock Band was recently announced as the winner of the Harold and Mimi Steinberg/American Theatre Critics Association New Play Award, which recognizes playwrights for the best scripts that premiered professionally outside New York City during 2018. Among Lauren Yee’s 10 other plays are Hookman, King of the Yees and Samsara. Her 2018 play, The Great Leap, will be part of Steppenwolf Theatre’s 2019-2020 season.

Victory Gardens’ production is presented with City Theatre Company of Pittsburgh and Merrimack Repertory Theatre of Lowell, Mass. Those two theaters will stage this production in September and October.