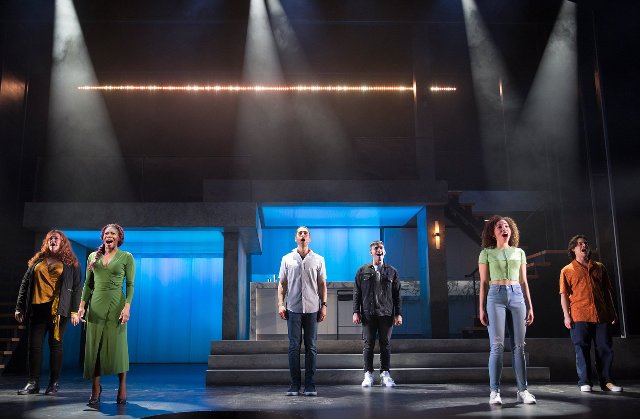 Next to Normal which won the Pulitzer Prize for drama is opening the season at Westport Country Playhouse through Sunday, April 24.

This can be a touching and disturbing play; however, this production did not do it justice. While many in the audience (and my fellow critics) were delighted with it, I found it cold, loud and at times unintelligible.

It is a rock/pop musical but in this production is was TOO rock; the over-amplification, the too-loud drums, and the constant belting made it almost impossible to hear the lyrics. During group numbers it seemed like a contest of who could belt the loudest.

The musical by Tom Kitts (music) and Brian Yorkey (book and lyrics) tells the story of an American family facing a serious mental health issue. The mother, Diana is depressive/bipolar among other things; she is still grieving the loss of her infant son (Gabe) 18 years ago. It seems that he is haunting her – as the teenager he would have been. That leaves Natalie their brilliant daughter feeling abandoned; her mother is too ill and her father, Dan, must work and try to keep the family together.

How can the family cope and maybe even heal? Kitts and Yorkey don’t give us any easy answers. The finale isn’t a happily-ever-after one with Diana cured and the family unit warm and loving.

Perhaps director Marcos Santana wants this disconnect between the story and the production. If so, he succeeded. But for me, the result was little emotional connection for the characters; I only felt involved with Natalie, played by Ashley LaLonde.

The impersonal nature of this production started with the set of supposedly a contemporary home. But the home is bare – some stairs and at the back what appeared to be a kitchen. Not one piece of furniture. This is a home in name only.

The director and Westport made a point of promoting that because of the diversity of the cast, the show would now shed some light on how mental illness affects people of color. Again, there seemed to be nothing that did that; it is still about an upper-middle-class family in suburbia.

Diana, played by Dar.Lee.See.Ah, is the central character. The performance is strong and her voice is strong. At times, it was difficult to know if Diana really wants to get well, if she is aware of the damage she is doing to Natalie, or how she feels about Dan, her husband.

As Dan, Wilson Jermaine Heredia fades into the woodwork. He seems as absent from the family as she is, except in a quieter, bystander way. I had difficulty remembering any memorable moment in his performance.

Daniel J. Maldonado plays Gabe, the son who haunts Diana. She has more of a connection to him than to anyone else in the show. Maldonado’s performance at times is so angry and possessive of her, that it seemed like an Electra complex gone awry. He was to possess her.

Ashley LaLonde was able to make Natalie the sympathetic figure in this story; she is the collateral damage. Gian Perez is good as her boyfriend, Gabe who tries to be as supportive as possible.

For some, this was an emotional roller coaster that moved them deeply. For me, unfortunately, I felt disconnected from the characters; it was only in the last scenes did I feel the tragedy of this family.

Next to NormalWestport Country Playhouse