The Wanderes at The Old Globe 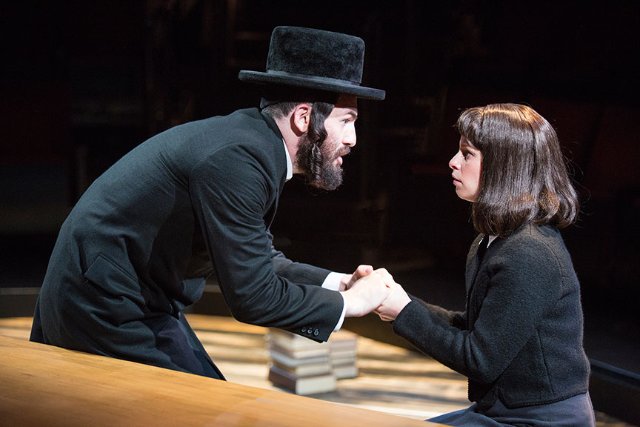 Dave Klasko as Schmuli and Ali Rose Dachis as Esther in The Wanderers, by Anna Ziegler, directed by Barry Edelstein, Photo by Jim Cox.

The Old Globe’s Erna Finci Viterbi Artistic Director Barry Edelstein is a bit of a National Treasure when it comes to the Arts. What a boon for audiences of San Diego’s Old Globe theatre complex when Edelstein was handed the keys to one of the country’s oldest and most prestigious theatre venues.

In snaring the services of Edelstein, it’s become a case of New York City’s loss in 2012 is now San Diego’s gain and we’re not giving him back. The Rhoades Scholar, writer, producer, and director’s track record is the envy of theatre professionals everywhere, and a beacon for new playwrights hungry to have their work seen on the stages of The Old Globe.

Edelstein is known as a theatre artistic director who welcomes new and emerging creative artists and provides a safe harbor and a caring environment allowing all to stretch and grow. Case in point: the current production “The Wanderers,” directed by him, is now performing in the round on the Sheryl and Harvey White stage. Edelstein not only fully embraced this world premiere drama, he collaborated with playwright Anna Zeigler in helping shape the powerful and little-known story of New York City’s Satmar Hasidic Judaism, a small, isolated, sect of highly orthodox Jews who adhere to strict Jewish religious dietary laws and traditions.

Brilliantly directed by Edelstein, who has a long list of New York credits as a producer and director at New York’s famous Public Theatre for ten years and at regional theatres across the county, also has a keen eye for talented actors who can run the gamut of every emotional moment once they step on stage. “The Wanderers,” is a powerful, insightful, and fascinating story vibrantly brought to life by five talented actors in a series of non-linear scenes that flash backward as well flash forward which collectively produce an evening of riveting theatre.

The story takes place in the present, in Monsey, New York, and Brooklyn New York. According to Edelstein’s character notes the play follows the lives of two sets of characters: a couple in the Satmar sect of Hasidic Judaism: Esther, a terrific Ali Rose Dachis and her husband Schmuli, introspectively and understatedly played by Dave Klasko.

And the other couple: Sophie (Michelle Beck) a writer with one book to her credit and working on her second novel, and Abe (an astonishing Daniel Eric Gold) already a Pulitzer Prize-winning author, with two Oscar nominations for Best Screenplay, in their young careers come to grips with their unraveling marriage. Sophie is a loyal, dedicated, wife and mother to their three children. Abe is a wordsmith and a dreamer/show business journalist who lives in a fantasy-like bubble and wonders if his life has the prospect of tasting forbidden fruit, perhaps, just waiting outside the no-nos of his marriage contract. Celebrity/actress Julia Cheever, alluringly played by sexy, Janie Brookshire, is Abe’s muse.

They connect over the internet in what begins as an interview assignment, but, now borders on an obsession of Julia by the glib, smooth-talking, and articulate Abe. Julia is a pivotal character in playwright Ziegler’s compelling drama in which Ziegler wisely leavens the narrative by infusing it with just the right amount of comedy and humor to hold the interest of the audience.

The beauty of this fascinating play lies in the actors’ talent to imbue their characters with such a ring of authenticity that even those unfamiliar with its core story subject matter can appreciate and enjoy its achingly poignant moments. Good writing and talented actors can elevate a good production into a great production.

The subject of ‘arranged marriage’ is still practiced in some places and cultures in the world. But in the West, and especially here, in America, one might have some difficulty finding small enclaves of religious separatists that still cling to the old ways of religious observance.

If one is waiting for spoiler alerts, you won’t get them from me. This remarkable cast deserves your full attention. Enough cannot be said about the wonderful and inspired direction of Barry Edelstein who seamlessly sweeps his audience along on playwright Ziegler’s richly textured narrative tale of ‘arranged marriage.’

The technical team led by Edelstein is equal to the performer’s dedication and talent when it comes to creating magical and memorable on-stage moments. The Set Design by Marion Williams is a spare, space staging design that maximizes the White Stage performing in-the-round space which allows full viewing access for the audience. Costumes designed by David Israel Reynoso are spot on, with Lighting Design by Amanda Zieve, and Sound Design by Jane Shaw, complete the creative team.

On a sidebar note: Kudos to Old Globe Dramaturg Danielle Mages Amato on her interviews and background articles for the production. I recommend patrons arrive early enough in order to read her informative articles. They will enhance your enjoyment of this impressive world premiere, which is performed without an intermission.

This splendid production of “The Wanderers,” performs at The Old Globe’s Sheryl and Harvey White Stage in Balboa Park, and runs through May 6, 2018. If you find yourself in San Diego sometime before May 6th, make sure you catch a performance. You won’t be disappointed.