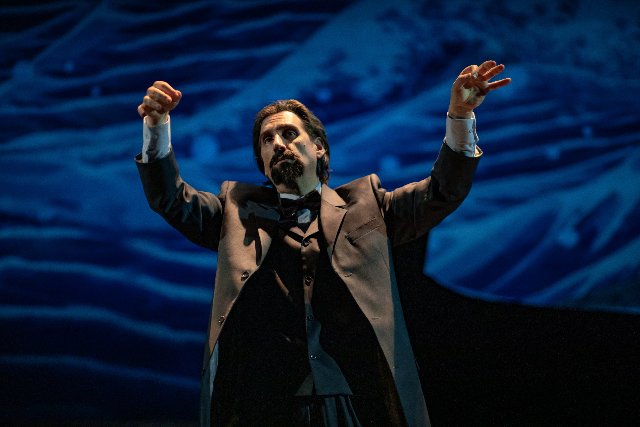 Hershey Felder occupies a unique and enviable position in the world of live entertainment.  He has created a series of solo theatrical performances that draw on his powerful strengths of master story telling and piano playing.  And if the subjects of the shows aren’t all personal heroes, which they probably are, each is a brilliant star in the constellation of great music composers.  He has written and performed music biographies for the stage of Gershwin, Bernstein, Tchaikovsky, Beethoven and more at some of the finest performance venues in the country, often breaking box office records.

He now takes on the life and works of Claude Debussy in a world premiere at TheatreWorks Silicon Valley.   The great turn of the century composer is credited as the originator of the classical music genre of impressionism, though he didn’t care for the term.  But his compositional style led to the designation because of its parallel with impressionistic painting with its shimmering, ethereal quality like the dizzying, elusive mix of colors on canvas representing tangible items.

As with his previous successes, Felder weaves together a composer’s music with biographical highlights, but the structure of his newest work differs.  He avows that Debussy actually is his favorite composer.  At the age of 19, Felder visited Paris and haunted the haunts and followed the footsteps where Debussy trod, including a pilgrimage two hours on foot each way to visit the composer’s apartment.  Because of this special connection with Debussy, Felder’s theatrical conceit is to insinuate his own story in with that of the composer.  The device works well both because Felder himself has a following and because of his personal passion for the composer and the city.  The one jolting aspect of the new production is that in Felder’s catalog of titles written for the stage, Debussy’s name does not appear except in the likely ignored third line of the title.

The performance takes place on a darkened stage, with a few props emblematic of Paris.  Animated chalk figures festoon a black backdrop to further depict the architecture and the ambiance of the city.  Hershey Felder plays with brio at the black Steinway grand and regales, often with great humor.  Interspersing his own growth and his travelogue with the compositions and many love lifes of Debussy, he details many vignettes, including attempted suicides by two of his love interests.

Despite his esteem as a respected composer, Debussy works are perhaps not as broadly popular as Felder’s other honorees. Prélude à l'après-midi d'un faune and La Mer are well known, and opera aficionados will know the important opera Pelléas and Mélisande, though it is seldom performed or excerpted onto recordings.  But the musical extracts that Felder plays, including those less likely to have been heard by audience members before, charm and scintillate.  The jaunty piano solo for children, Golliwog’s Cakewalk, is a fine example that also reflects the composer’s iterative relationship with African-American musical forms.

Felder does note the critical role that Debussy’s innovativeness played in directing classical music away from the weightiness of Wagnerian romanticism.  Debussy felt that music should reflect the delightful way people feel when they engage with nature.  Influenced by a Javanese gamelan performance he witnessed in 1889, he adopted the whole note scale, which facilitates the dreamy sound that is associated with impressionism.  With this change, he not only disrupted the direction of classical music but also developed the musical vocabulary that led to improvisational jazz as best realized by the great pianist Art Tatum.

Of course, Debussy’s signature piece which makes him a household name and exemplifies his dream-like musical style is Claire de lune.  Felder’s treatment of this piece is clever and enticing.  He opens the performance with the story of how he learned the piece, his mother’s favorite, at age six.  By playing only a brief, but familiar phrase from it, he engenders anticipation for the work throughout the performance.  It comes as the finale, and it is played with such grace and delicacy that it quieted the venue and had the audience on the edge of its seats - a worthy finish to a fine confection.

This review must close on a tragic note.  As I write on April 15, 2019, one of the world’s great architectural masterpieces and cultural assets for all of civilization, Paris’s Cathédrale de Notre Dame, is engulfed in flame.  This is a great loss to humanity.  Indeed, this landmark is significant to A Paris Love Story, as the author speaks warmly of Notre Dame and  of the magic of point zero, the designated spot in front of the cathedral that represents the symbolic center of Paris.  The spot will remain, but can any of the cathedral be saved or reclaimed for posterity?

Hershey Felder: A Paris Love Story, written by Hershey Felder, is produced by TheatreWorks Silicon Valley and plays at Mountain View Center for the Performing Arts, 500 Castro Street, Mountain View, CA, through May 5, 2019.