Amazons Among Us by Donna Dodson 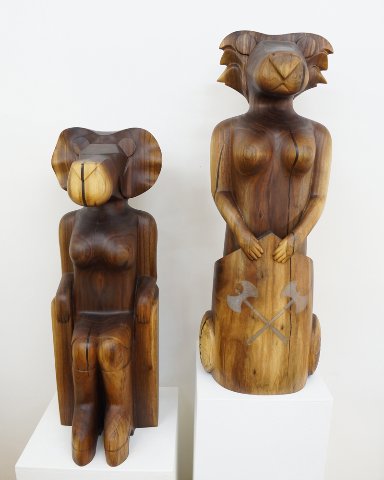 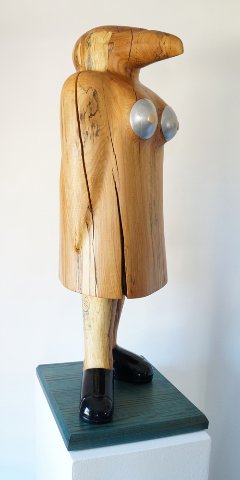 Amazons Among Us by Donna Dodson May 5th-June 6th 2021

First Friday opening event/performance “I should have stuck to ballet” with Kledia Spiro and Janelle Gilchrist Dance Troupe: May 7th 5p-8:30p

A Virtual Conversation with Chanda Prescod-Weinstein on the Future of the Feminist Imagination, Thursday May 20th @ 7pm

2020 felt almost apocalyptic, rife with divisive politics, racial unrest and a Pandemic that took over half a million American lives.  Yet, on the 100th anniversary of women’s suffrage, history was made when a woman was elected Vice President, ushering in an era of hope as more women rise to take leadership roles in all fields.  It is fitting that Wonder Woman celebrates her 80th year as America’s most famous heroine in 2021. The world needs new heroines, and Dodson creates them for this exhibition.

In her new series of wood sculptures, Dodson re-imagines Albrecht Durer’s “The Four Horsemen of the Apocalypse” as Amazon warriors. She uses the traditional medium of woodcarving to suggest that these women have always been among us, but that gender misconceptions have prevented us from recognizing them. Drawing inspiration from legendary warrior women such as the Dahomey of West Africa and the Rani of Jhansi, Dodson’s amazons portray courage, strength and grit.

Dodson chose to collaborate with artists Trina Baker and Kledia Spiro, and poet Melchor Hall, because of their commitment to social justice. Dodson, Baker, Hall and Spiro are united in their quests to create a new iconography of female empowerment.

In Dodson’s collaboration with Baker, whose work deals with sexual assault, domestic violence and immigration, the artists translate Dodson’s Amazon warrior sculptures into three-dimensional digital characters to create a short animation demonstrating their superhero qualities. Dodson and Baker both take inspiration from civic minded heroines from their own families: Dodson’s great Aunt, an officer in the WACs, and Baker’s grandmother, who served four terms in the Connecticut state legislature.

Spiro feels a deep connection to the fictional character Xena, the Warrior Princess. For this exhibition, she premieres sculptures, photographs, and a two-channel video in honor of Xena. Audience members will have the opportunity to wear Spiro’s interactive sculpture. Spiro wonders whether we can become our own superheroes, particularly as “girls”. Can we unchain women from society’s expectations of mothers, good house wives, eroticized objects, and irrational emotional beings?

Hall responds to Dodson’s sculptures and themes of super-heroism and able-bodied-ness with several prose poems on display as part of the exhibition. Hall’s poems address the gendered contrasts of strength and weaknesses, youthfulness and aging as well as the protection of self and others in relationships.

This exhibition offers the audience inspiring words and images of women to uplift and inspire the amazons among us who have yet to discover their own superpowers.

Donna Dodson is a Visiting Scholar at Brandeis University’s Women’s Studies Research Center and a member of the Boston Sculptors Gallery. Her work is in the permanent collection of the Provincetown Art Museum, the Art Complex Museum and the Fuller Craft Museum in Massachusetts, The Noyes Art Museum at Stockton University in New Jersey and the Davistown Museum in Maine. Her “Seagull Cinderella” sculpture attracted international media attention.

Kledia Spiro creates videos, performances, installations, and paintings. Born in Albania, she was a member of an Olympic weightlifting team. Kledia uses weightlifting as a vehicle for discussing women’s roles in society, immigration, and war. Spiro has exhibited nationally at the Museum of Fine Arts, Boston; Queens Museum, NY; SAIC Sullivan Galleries, Chicago; Museum of Art, University of New Hampshire; and the ProArts Gallery in Oakland, CA.