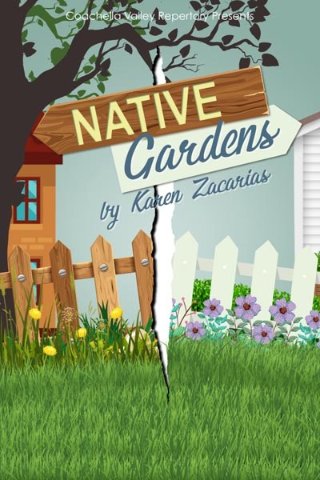 As the early scenes of playwright Karen Zacarias’ 2019 comedy play-with-a-bite unfolds, one would think ‘I’ve seen this play /story before’.  But, you would be incorrect.  More precisely, we’ve all seen productions of the subject matter in “Native Gardens”, however, playwright Zacarias brings a new and fresh authenticity to her story solidly and deftly directed with sensitivity by Michael Mathews.

Latina/American born in Mexico, Zacharias bases her “Native Gardens” comedy on her book of the same name, becoming the most produced playwright in America over the last four years.   Her plays include The Copper Children, Destiny of Desire, The Book Club, and Legacy of Light, among many others

We’re now producing plays and movies in the 21st century that appeal to a different age demographic.  Today’s entertainment productions are not the choices that your grandfather, nor your father made 50 years ago.  Everything on planet earth is constantly evolving from climate change to the way we speak, look and relate to our various communities in 2022.

America today is a melting polyglot numbering 338 million souls who call America home.  We need to get on board the ‘future’ train or we’ll be left at the station wondering where the country and our society went.  The realities of today’s world may sound a little scary but as the young people of today say, “It is what it is.  Get over it.”  Harsh words?   Yes.  But much wisdom lies between the lines of Zacarias’ clever and intriguing dialogue spoken by this talented four-member cast and the four-member on-stage ensemble.

The 2022 Oscar Awards telecast visually validated that we are many individuals with creative skills and intelligence (except for the ‘slap’ seen around the world) that contribute to every aspect of American life.  We may not all look alike but we are all unified in its spirit.

The comedy set in an upscale neighborhood in present Washington D.C. revolves around young new neighbors Tania and Pablo (wonderfully played by Marta Portillo and Andrew Joseph Perez, respectively) who live next door to Frank and Virginia (Dennis Gersten and Janellen Steininger) an established older couple who cherish their prize-worthy English Garden, among other memories.

Pablo is a rising star attorney at a posh D.C. law firm and Tania is his very pregnant doctoral candidate wife.  We all know how young competitive lawyers are when it comes to being at the top of their profession.  We also recognize, how difficult and important it is for ‘seniors’ to embrace change as they get older.  How the characters resolve the situation that each finds itself in is the beauty of “Native Gardens”.  We could all learn its important messages once one gets past the obvious obstacles.

Tania is set on redoing the garden that existed when they bought the property. She wants to plant sparse native plants.  There is nothing wrong with her plan except that it flies in the face of Frank’s lush English Garden that he enters yearly in the Best Neighborhood Garden competition.  Competition may be great for business, but it can turn friendly neighbors into enemies when personal lifestyles clash.

Seeing problems from another’s point of view is the essence of compromise.  It isn’t easy to walk in other people's shoes when one is not used to the path less traveled.  That is at the heart of playwright Karen Zacharias’ thoughtful and reflective comedy play.

It’s the splendid cast that makes this production such an entertaining evening in the theatre.  Dennis Gersten as Frank delivers a fully realized performance as a resistant to change senior.  I remember his two memorable performances in past CVREP’s productions of “The Chosen” and “How I learned to Drive”; both powerful and entertaining.

His co-star Janellen Steininger may be new to me, but her portrayal of Virginia, a senior who displays a softer, yet stubborn side, delivers a nicely nuanced characterization as Virginia. Experience and talent, like cream, always rise to the top.

Marta Portillo as Tania, makes her ‘uncomfortable’ points in negotiation mode which comes across as a highly intelligent and savvy young Latina who knows how to gently but firmly resolve the escalating thorny issues (no pun intended) between Frank, Virginia, Tania and Pablo.   The end result produces a winning portrayal.

Right from the instant Andrew Joseph Perez as Pablo, breezily and confidently comes on stage, the audience knows they’re in for a treat.  His energy and his stage presence signals the comedy’s message of this is going to be a fun evening.  Just go with the flow as the story unfolds.  You won’t be disappointed.

In the technical department led by director Mathews, the first thing the audience will see as they enter is the absolutely stunning set design created by Emmy-winning resident designer Jimmy Cuomo.  It’s one of the best designs he’s created at CVREP over the years.

Postscript:  This marks the final production of CVREP under the outstanding 13-year stewardship of founding Artistic Director Ron Celona.  It appears that the siren call of the rocking chair of retirement was too strong to resist.  Well Done and Bon Voyage!!  He will be missed.

Performances of “Native Gardens” will be available to enjoy from April 16th to April 24th, 2022.  Call the Box Office for reservations and ticket information at 760-296-2966. The production is performed without an Intermission and runs about 90 minutes.