An Opera Comes Out of the Deep Freeze 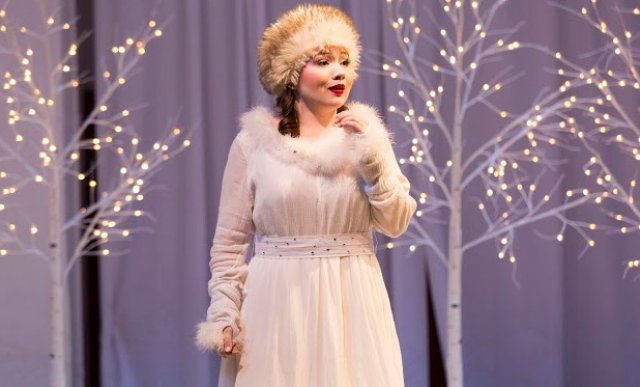 Snow Maiden at the Manhattan School of Music

Nikolai Rimksy-Korsakov is one of the most important opera composers of 19th century Russia. A member of the "Mighty Handful", he revised works by Mussorgsky, taught Stravinsky and was a master of orchestration and melody. However, outside of a few concert works, the bulk of his music, most notably a long catalogue of operas, receives little attention. This made it all the more interesting that the Manhattan School of Music's Senior Opera Theater decided to mount The Snow Maiden, an enchanting fairy tale opera and the composer's personal favorite.

Now, (as the audience was warned by MSM program head Dona Vaughan in a short address), this is a Russian fairy tale. Characters fall in love quickly, break up quickly, reunite, change alliances and even kill themselves. All that warning was needed for this dizzying four-act romp through a somewhat cut version of the very long score, presented in an excellent English translation that was created for Opera North by Alastair Middleton, that allowed the complex story to be communicated clearly to the packed house.

The plot of The Snow Maiden (its Russian title is Snegurochka) bears some small resemblance to the Disney musical Frozen. In the Russian story, the title character is the daughter of King Frost and Fairy Spring. She is an innocent young girl with an icy heart. With Russia gripped in a long, hard winter, various suitors try their hand at winning her affection. Eventually, the Snow Maiden learns what love is at a terrible cost: her inflamed, newly passionate heart causes her to melt away in the light of the spring sun. (This kind of symbolic sacrifice is central to Russian pagan mythology, and is also a feature of The Rite of Spring by Stravinsky, who was Rimsky's most famous student.)

Vaughan directed a production that kept the action moving, even as the opera worked through a lengthy prologue and four acts. A simple backdrop of small birch trees and a white AstroTurf acting surface served as a substitute for the wintry Russian taiga. The costumes reflected all the different social classes present in Rimsky's opera: from the Snow Maiden herself and her otherworldly parents, to the gormless peasant couple that adopts her, to the Tsar Berendey, resplendent in gilded robes and a traditional klobuk hat. (It should be noted here that this story takes place in a legendary Russian period, making it possible to put a Tsar upon the stage.)

There were some fine young singers in this cast. Soprano Shelén Hughes scaled dazzling heights as the Snow Maiden, her voice flinty and cool until her passionate outburst in the fourth act.  Andrew Henry brought a dark, firm bass to the short role of King Frost. He was well paired with the creamy, rich mezzo-soprano of Cassandra Kalinofski as Fairy Spring, who appears periodically throughout the opera. (When not sporting a leafy crown, Ms. Kalinofski helped fill out the chorus. The spectacularly costumed Lauren Lynch was the Forest Spirit, accompanied by a flock of giggling birds. All of these figures were quickly repurposed as peasant women once the humans took the scene.

The actors playing the humans were equally impressive. Gabriella Chea excelled in the trouser role of Lell, the songsmith who is the first to attempt to woo the Snow Maiden. Marcel Sokaski and Melanie Long played Kupava and Mizgir. She has a particularly promising young voice and one wondered if a lot of her role had been cut in the interest of time. He played this unheroic figure to the hilt as an impetuous and callow youth whose sudden passion for the Snow Maiden nearly leads to sexual assault. Later, as she melts in his arms, he goes mad and throws himself into a lake.

This unlikely collection of Russians was ruled by Tsar Berendey (Ramon Tenenfrancia.) Tenenfrancia coped well with the role's high tessitura but had some trouble in the passagio, that tricky tenor's tunnel between chest and head voice. Still, Tenenfrancia's presence brought a sense of serenity and calm to these otherworldly proceedings, which somehow have a happy and uplifting ending despite the suicide of one of the protagonists.