End of the Season Treat at the Metropolitan Opera 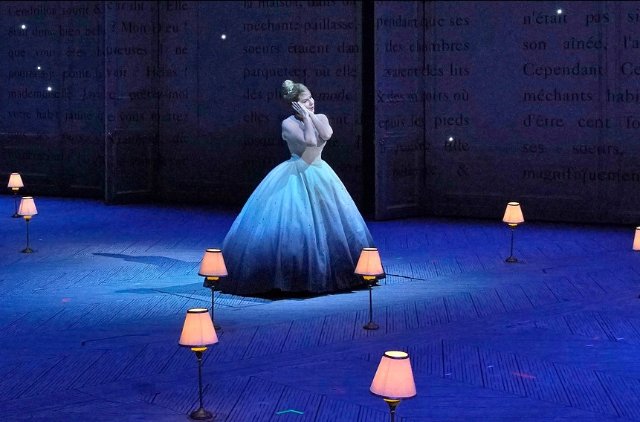 At the end of the 2014 season, the mezzo-soprano Joyce DiDonato climbed atop a wedding cake at the end of Rossini's La Cenerentola, a role in which she caused a sensation at the Metropolitan Opera. This month, DiDonato returned to the stage of America's largest opera house--and to the ballrooms of a very familiar fairy tale--to sing the title role in Cendrillon, the 1899 adaptation of the Cinderella story by Jules Massenet.

Cendrillon is Massenet's fourteenth opera, written at the apex of his popularity as the last acknowledged master of the French romantic style. As conducted here by Bertrand de Billy, its score has the weight of fairy cake, high in sugary melodies and whipped by conductor Bertrand de Billy into an airy soufflé of sound. It's hard to believe it, but this run marked the Metropolitan Opera debut for an enchanting work.

The Met should not have waited this long. Unlike the better-known Rossini adaptation, this Cendrillon hews close to the familiar version of the fairy tale written by Charles Perrault in 1698. All the elements known to children everywhere: the glass slipper, the ball, Prince Charming, and the wicked stepsisters are presented here in glowing detail, supported by effervescent orchestration and Massenet's considerable melodic gifts. Sure, it's lightweight but as an operatic fairy tale it deserves this moment in the spotlight.

In the title role (in this opera her "real name" is Lucette) DiDonato was in familiar territory, applying a silvery sheen to her mezzo-soprano to navigate the work's upper passages. Better yet though was her acting with her instrument, especially in the early scenes when Lucette is browbeaten by her two harridan stepsisters. She was even better in the long monologue that starts the third act, as the once again dowdy Lucette comes home from the ball.

This was a cast packed from top to bottom with vocal firepower. Kathleen Kim gave a stellar turn as the Fairy Godmother, a part that the coloratura soprano seemed born to play. She soared above the stage and energized every scene she was in. As Prince Charming, the veteran mezzo-soprano Alice Coote seemed to fit seamlessly into the travesti role, and the sound of her voice twinning and twining with DiDonato's made their scenes together an absolute delight.

Stephanie Blythe made for an impressive and formidable Madame de la Haltière. She was packed into a series of unflattering gowns that maximized her girth and a Lewis Carroll fright-wig only added to the effect. Even bigger though was her formidable Wagnerian mezzo-soprano, with rich, dusky colors as she henpecked her husband and ruled the roost. Lucette's father (Laurent Naouri) is also a character in this version, a warm and sympathetic figure for her to lean on. Their tender Act III duet was lovely and touching, with an almost Verdian warmth.

It was also good to see another promising Juilliard-trained soprano Ying Fang as Noémie, one of the wicked stepsisters. (Her counterpart, Dorothée was sung by Maya Lahani.) Their entrance in balloon-bottomed hobble skirts that made them look like wrapped bonbons got one of the biggest laughs of the night. The rest of Laurent Pelly's whimsical production, which played before sliding, tilting walls that had the beginning of Perrault's French text printed on them, was inspired. There was much use of letters and words to create physical props like the Prince's bed and Cinderella's carriage.  (Reprinted with permission of Superconductor).