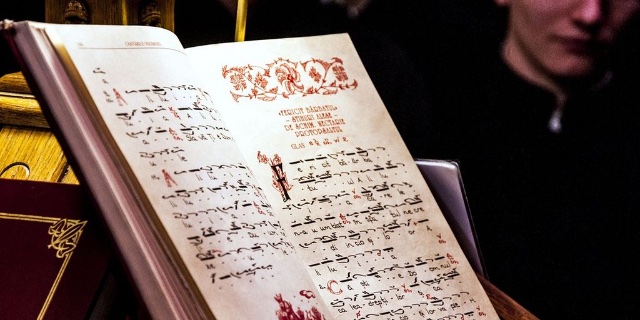 We are rooted in the Byzantine chant in this evening’s concert.  Pianist Paul Barnes chants in the Greek Orthodox service. As an introduction to each based on specific chants, he sang. We first heard the tones mixed with breath and feeling of these remarkable interpretations of the psalms. Listeners are able to slip into the works with echoes of their origins fresh in the memory.

Working with the chant extends the pitch relationships available. Slurs are not used to suggest different tones.  Rather the distance between notes in a space confined by outer notes varies.

Barnes opened the evening with Distances Between 2.  Ron Warren, who plays the Native American flute, composed the piece for Barnes. Warren has focused on the proposition of Byzantine chant music, that while the outside notes of a mode may stay the same, the distance between the inside notes varies. The smooth melodies and often military steadiness of beat reveal the lovely melodic lines.

Plunging into Barnes’ piano reduction of Philip Glass’ Annunciation Suite, both the composer and arranger agree this is miraculously faithful to the original. To be sure, one performer, the pianist, takes all the parts in hand, but he is able to realize the work’s richness.

Joy in repetition is a reverential gesture. Barnes brings out the melody of the Annunciation chant in both the deep bass and the tinkling top. We are listening down a familiar alley of arpeggios, yet mysteries abound.

David von Kampen has brought rhythmic variation to his adaptation of both the baptismal and funeral chants he incorporates in Trisagion. His melodic sense is often angular. Jazz beats widen the rhythmic variety.

Victoria Bond has created her Three Illuminations over time. Fragmented phrases of varying lengths often overlap. The phrases themselves are often additive. She keeps lovely top phrases going for endless satisfaction. Barnes plays the work with a charming roll of the melodies.

In these Cutting Edge concerts, Bond, the curator, show herself to be a captivating illustrator of form.

This concert is available here.