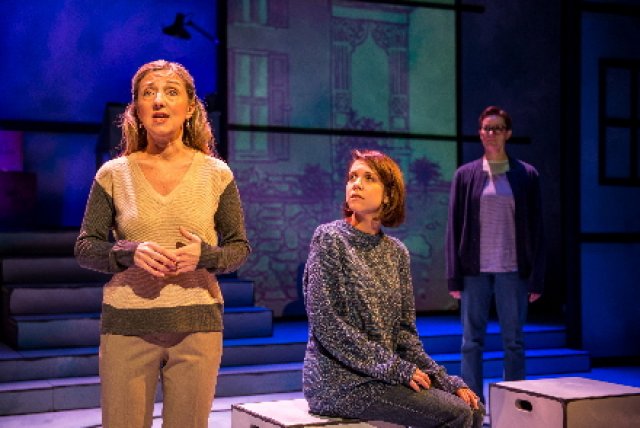 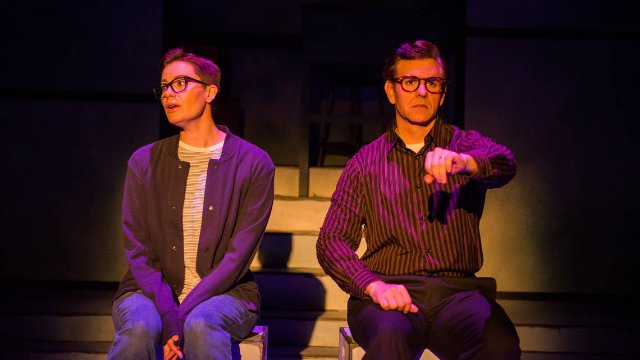 The people who birthed us can seem the most familiar and foreign individuals…at the same time.

But what if you could make better sense of this and more with a special ability you possess?

If you’re someone with cartoonist Alison Bechdel’s talent, you’re lucky in that way.

Art's power to elucidate, heal and constructively deal with issues is on vivid display in Fun Home, a musical about coming to terms with one’s past and seeing it from an adult perspective.

This relatable, touching and funny Broadway musical is receiving its South Florida premiere in a mostly solid, entertaining Zoetic Stage production through May 13. This musical made history with the first all-female writing team to win a Tony award for best musical score.

The piece, a multi-award-winning show and finalist for the 2014 Pulitzer Prize for Drama, is based on Bechdel’s much-acclaimed autobiographical graphic novel. In it, the author tries to better understand, through her art, her eccentric dad.

He is one Bruce Bechdel. This enigmatic puzzle of a person is comprised of many parts which hardly fit neatly together. His adult daughter wants to “know what’s true/dig deep into who and what and why and when.”

In the play, Alison appears at three stages of her life. At times, they’re all on stage together. There’s Grown-up Alison, 43; “Small” Alison (pre-teen) and “Medium Alison,” an Oberlin college student (about 19) who is just coming out as a lesbian. Her girlfriend, Joan, is played with a carefree, understated, yet fun-loving spirit by Hannah Benitez.

As the adult Alison draws, revises, observes and ponders, the same person in the earlier stages of existence comes to life, along with Alison’s other family members. By putting all three Alisons on stage, we can visualize Bechdel’s imaginings and thoughts swirling in her mind. This can explain the circles on stage which rotate at times.

The source material and the stage show are rich in pathos, depth, honest emotion, nuance and humor. An intriguing aspect of the graphic novel and musical is the wry and dark humor. It stems from “Adult Alison’s” remarks, based on her foreknowledge of what will tragically occur.

We feel for Bruce. Sure, he’s done bad things. However, deep down he’s a sympathetic person, one who’s easy to root for.

He can be consoling and lovable, but also volatile. Watch the seemingly gentleman host, then suddenly gasp at the unsteady and vulgar, aloof individual.

Bruce’s various jobs and roles in the small Pennsylvania town where the play takes place illustrates his complexity. He operates the Bechdel Funeral Home (“Fun Home” is a comic nickname for “Funeral Home”), restores antique structures, maintains a key role in the area’s historical society, teaches high school English and reads avidly. Still, some of his behavior is off-putting, to say the least.

Much of adult Alison’s work trying to uncover Bruce’s dark secrets comes after he committed suicide (or did he?). He died while Alison was at college, which is when she “emerged from the closet.”

While the program doesn’t specify the time period the musical covers, someone indicates during a pre-curtain speech that the show spans the 1970s through the early 2000s.

Questions, understandably, abound in medium Alison’s mind: Was her father so ashamed and/or guilty at his own homosexuality or his misdeeds that he killed himself? What about her own coming out? Was that something she inherited from her father? Is she really a lesbian?

While Fun Home doesn't take place during the present time, we can learn about the importance of directly connecting with people, especially family members.

We live during a time when people communicate mainly through social media and e-mail. Long gone are the days when the majority of families ate meals together and discussions took place around the table. Children have different activities at different times and parents may have different working schedules.

This lack of time spent together and a dearth of direct and honest communication can lead to tension within households as well as unresolved issues that linger into adulthood. This can leave adults such as Alison with the need to "solve" or at least come to grips with unanswered questions and unresolved problems.

One of the constructive ways to do that is through art.

Under Stuart Meltzer's sensitive direction, tension is palpable in the Bechdel household.

Meltzer, however, makes at least one questionable choice.

As the adult Alison is looking back at her past, by furiously drawing and editing, adult Alison is seated behind one of a few projection screens onto which Michael McKeever’s illustrations appear.

She’s seated far upstage, nestled in what resembles a room. As a result, it’s hard to see her facial expressions as she tries hard to come up with the perfect cartoons.

When we do see her, as she moves from her chair to observe her past in action, Anna Lise Jensen, as adult Alison, betrays little to no emotion. Jensen’s performance grows stronger as the play hurtles toward its bittersweet ending.

On another positive note, Jensen speaks in a wry, understated tone while commenting on her dad’s past actions.

The stars of this production are Nicholas Richberg as Bruce, Jeni Hacker as his wife, Helen, and Johnson as Medium Alison.

Richberg slips seamlessly from one emotion to the next, each conveyed with spontaneity and a natural quality. It’s a tour-de-force, multi-faceted performance.

Bruce, as portrayed here, is an enigma, with sudden mood shifts and an aloofness that makes you think he's in another orbit. Thankfully, Richberg avoids turning Bruce into a completely glum, thoroughly mean person as Bechdel often depicts through cartoons in her graphic novel. The actor injects just enough charm and likability so that we care about Bruce and we're sad when he dies.

Hacker excels as his wife, her face worn and weary. Her voice assumes a similar quality. Hacker makes clear that Helen is tired to death of Bruce’s temperamental nature, shenanigans and lies.

Kimmie Johnson endows Medium Allison with energy as well as authentic and aching emotion in a versatile, nuanced performance.

The child performers’ big number is “Come to the Fun Home,” an upbeat, rap-like advertisement for the funeral home with some questionably repetitive lyrics.

During this number, the children need to command the stage more and their dancing is tentative.

Mostly, the performers have able singing voices, backed by a skilled live orchestra.

Jeaniie Tesori’s score, with clever, humorous lyrics, comprises a vibrant mix of styles. Some are upbeat and fun, while others carry sophisticated, Sondheim-like qualities. The songs deepen character, enhance emotions and correspond with the book writer/lyricist Lisa Krohn’s elegiac tone.

While the songs aren’t particularly memorable, a whole lot more is. You will recall a touching tragicomedy. It’s more accessible than Bechdel’s sometimes engrossing and colorful but also heavy-handed graphic novel with too many deep literary references.

The stage show gets to the heart of the characters and their situations in a more taut manner.

The musical is faithful to its source material in terms of storyline and characters. The faithfulness is also captured in scenic designer Michael McClain's set. A couple of its structures are rendered in the shape of what resemble pencils.

McClain has opted for minimalism. This allows the focus, reinforced by Rebecca Montero’s varied, mood-enhancing lighting, to be on the action and the characters.

“My dad and I were exactly alike.”

My dad and I were nothing alike.”

Those are two captions the adult Alison chooses for two panels.

Raise your hand if you can relate.

Zoetic Stage’s production of Fun Home runs through May 13 in the Adrienne Arsht Center for the Performing Arts’ Carnival Studio Theater, 1300 Biscayne Blvd. in downtown Miami. Showtimes are 7:30 p.m. Wednesday through Saturday, with matinees at 3 p.m. Saturday and 4 p.m. Sunday. For tickets call (305) 949-6722 or visit zoeticstage.org or arshtcenter.org.