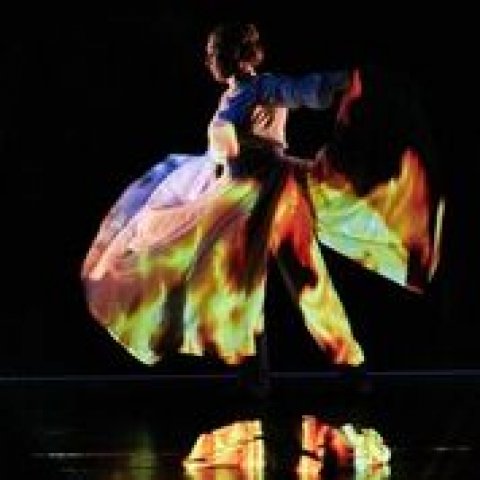 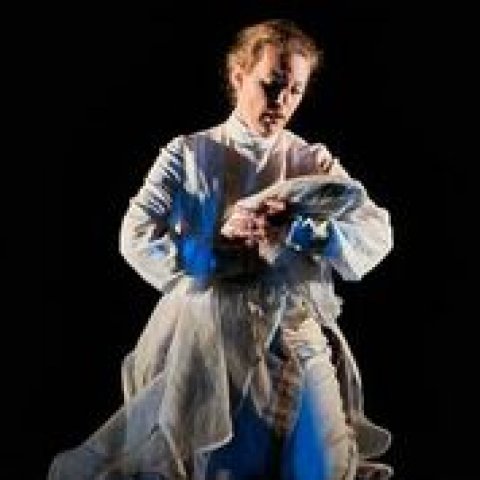 Mette af Klint, who conceived the opera, and sang the title role in a gorgeous coloratura. 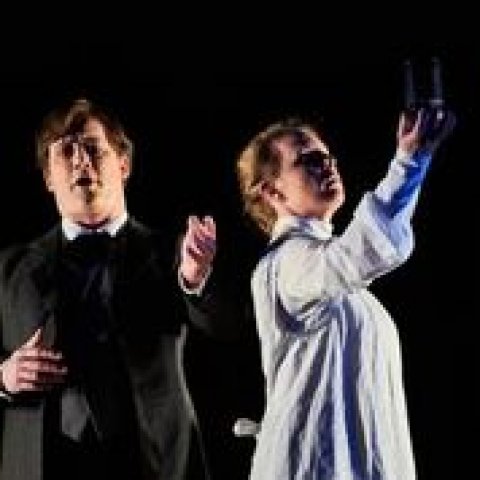 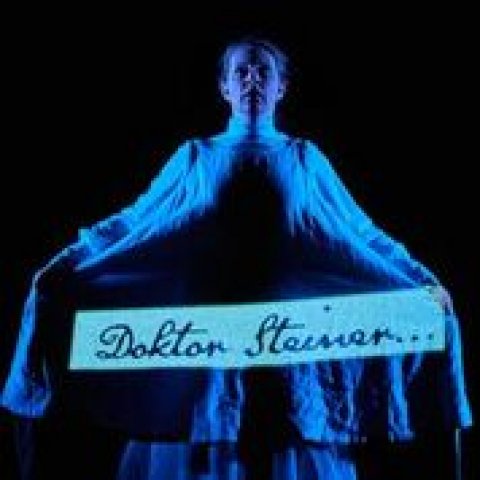 The Works & Process series at the Guggenheim Museum is full of surprise and delight.  The notion that one’s experience of art can be enhanced by music is not new.  Yet in the case of Hilma af Klint, the exhibit of whose works has been the sensation of the New York art season, using a chamber opera to take us inside her experience, was enormously helpful to a better understanding of the woman and her work.

Images of the artist's line and colors were projected onto her always white costume, which reduced from blossoming white to a shirt and pants. The story begins with the death of Hilma's beloved sister. Across the globe at the end of the 19th century, distinguished persons were consulting ouiga boards to contact people in an alternative universe. Like philosopher and Harvard professor William James in this country, Hilma contacted her sister through a medium. In exchange, the medium guided Hilma's hands to create her now famous temple paintings.  Ten of them are on display as you step onto the upward ramp of the Guggenheim.  Frank Lloyd Wright's Museum is also a temple of sorts.

To understand how seriously people took the 'ideomotor' action works, we can read James on the subject. The planchette, or board, supports a pencil which seems to move automatically.  Expectations often guide the hand. We are not conscious of them. Suggestion guides the movements of our arms or hands.  We select what happens but are not always aware of this.

Rudolph Steiner, the European intellectual polymath had sympathy with Klint's outreach to the spiritual side of the universe. When he came to Stockholm, Klint invited him to see her painting inspired by another world. He rejects the work as being incomprehensible to the public. His advice stopped af Klint from painting for four years. When she returned to the easel, her work did not have the force and vitality of the temple paintings. Who can say why this happened? The opera puts the blame squarely on Steiner. In af Klint's times, it may well have been easier for a female artist to attribute her talent to an outside source.

Benjamin Staern is a composer better known in Europe than in the US. He seems perfect for this portrait.  Watching him leap onto the stage after earlier performances of his compositions, spreading his arms wide and jumping into the air, you sense that he too could be in direct communication with an alternate universe.

Meete af Klint conceived the opera and sings the lead role. She has a gorgeous coloratura voice and can balance a glass of water on her head.  This is important because Klint was told to study a glass to gain access to her artistic powers.

Af Klint's works have had a rapturous reception.  We receive rapture through the music.  One feels its diminution after Steiner's visit, sung with an almost frightening conviction by Freik af Klint, who also sings the role of Eric.  Alma Adolfsson is a prerecorded presence.

Stefan Lindgren plays piano and is also the music director.  Joined by Victoria Stjerna on violin and Andreas Lavotha on cello, af Klint's journey is portrayed beautifully in a chamber orchestration.

Af Klint's paintings have had a justly exuberant reception.  The opera expands our feeling for the artist and her work.