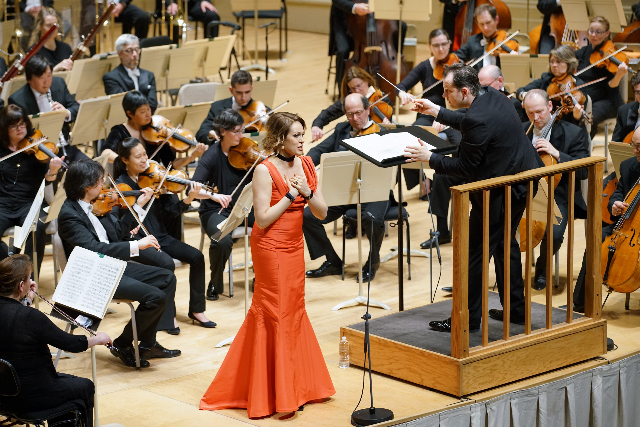 Andris Nelsons ended his second full season as Boston Symphony Orchestra music director with a French/Russian program, but more importantly with the ineffable sense that the orchestra is now his and that he is the orchestra’s. They genuinely seem to love making music together.

Good things have been going on. In recent weeks, Nelsons confidently led the orchestra in some big works – Shostakovich’s Symphony No. 8, Bruckner’s Symphony No. 3, culminating, in the penultimate week, with Mahler’s Symphony No. 9. The Mahler, all hour and half of it, seemed to contain the whole world that Mahler once said his symphonies aspired to – and its final moments, in which the music fades away into the ether, were particularly transcendent. It was the best performance I’ve heard Nelsons give.

And Nelsons seems to be looking at the BSO’s incredible history as an institution that commissions and premieres important pieces of music, something his predecessor cared little about. The BSO gave both the Mahler and the Debussy on this program their first American performances.

Gazing at each other across the vast expanse of Germanic culture, Russian and French music seem to have a strange affinity. That’s too big a subject to go into here, but it gave the concert an unlikely coherence.

The big draw for much of the audience was what seems to be becoming a regular feature – we can only hope - the yearly appearance of Kristine Opolais as soprano soloist. Opolais is one of the most glamorous of the young singers now taking their place in the world’s major opera houses, replacing the opera stars of the current generation who are now retiring or cutting back on their performances. And, of course, in real life, she is Nelsons’s wife.

Opolais just came off a run of Puccini’s “Manon Lescaut” at the Metropolitan Opera in New York, and in general her rich, creamy voice with its gleaming high and dusky low notes is well suited for Puccini and other late Romantic composers. I don’t think she’s done any Strauss, but I suspect that is in the offing. Her stab at Wagner, nothing less than Isolde’s “Liebestod,” at Nelsons’s first gala concert last season, was a miscalculation if not an embarrassment. But Strauss is not Wagner – he looks back to Mozart and is aware of peers like Puccini - and I think he would be a happier match for her voice. Can we look forward someday to hearing her Marschallin?

In any case, Opolais sang Russian music on the final concert of her husband’s second season as music director, music they both know well, having been born during the final days of the Soviet Union in Latvia, not yet an independent republic. And learning the Russian song and opera literature is not such a hardship. After the fall of the Soviet Union, a whole generation of Russian-trained singers introduced the West to a rich and complex tradition that had been neglected here. There is still much for the next wave, which Nelsons and Opolais represent, to show us. Nelsons’s Shostakovich series, which he is conducting at Symphony Hall and recording, is just a hint of what we might expect in the future. (Although you can hardly call Shostakovich’s music neglected.)

She sang a short song by Rachmaninoff and Tchaikovsky’s extended aria, a solo scena really, for the lovesick Tatiana in “Eugene Onegin.”

The Rachmanioff, just two minutes long, was just an amuse-bouche, or perhaps a palate cleanser after the stringent formalism of Henri Dutilleux’s “Métaboles,” which opened the program. (One does have to wonder why only one of the songs from the 12-song series was programmed. Couldn’t two or three of them have been assembled to hint at what the entire song cycle contains?) Opolais gave the trifle, a Transcendentalist vision of nature, her serious attention, turning out lush, creamy tone that was reminiscent of Renée Fleming. She and Nelsons made the Rachmaninoff, a work he composed in 1902 before the Revolution, sound almost like Puccini.

Together, they made the Tchaikovsky sound like Tchaikovsky. Tatiana’s Letter Scene is arguably the composer’s peak moment in opera; indeed, even with heavy competition, it is one of the peak moments in all late-19th century Romantic opera. A perfect balance between realistic and Romantic urges, it avoids histrionics, expression of false feeling or excess emotionalism. It is a cool revelation of a young girl’s awakening to desire and, hence, womanhood. It reminded me of other expressions of the same moment of transformation in the visual arts, Edvard Munch’s “Puberty” and Berthe Morisot’s “Girl with a Greyhound (Julie Manet),” both painted in the early 1890s, just a few years after Tchaikovsky wrote “Eugene Onegin.” It’s interesting that a moment of female sexual maturation, so long ignored in the arts, attracted interest in the late 19th century. Could Freud be lurking in the shadows waiting for his moment to occupy stage center?

Tatiana is a provincial adolescent who falls in love at first sight with the handsome and sophisticated Onegin, a friend of her elder sister’s betrothed. He shows her the usual courtesies and when she goes to bed that night she is so “on fire” that she cannot sleep and instead writes him a letter declaring her love.

The scene is fragmented, paralleling her confused mind – she has never felt love before! Orchestral passages, a sound mix suggesting innocent desire touched with Tchaikovsky’s constant melancholy, separate moments when the emotionally torn Tatiana – will Onegin, her “fatal tempter,” scorn her “vain dream,” her school girl declaration of love? - sits down to write, i.e., sing, her lines, declaring her love. While the orchestra plays, she flits around her room, tearing up what she has written to start over again. The psychological sensitivity Tchaikovsky brought to the composition is astonishing; it’s almost as if Tchaikovsky himself were or had been a teenage girl.

Opolais, who was wearing a deeply cut, floor-length red gown, her hair falling loosely to her neck, was Tatiana from before her first utterance, taking on the character during the orchestral introduction. She sang with a radiance that suggested the first flush of love, and her voice was full and unbroken from her top to her rich low notes. Nelsons, who has conducted opera extensively in Europe, was a supportive collaborator, negotiating seamlessly between his large orchestra and the demands of a single vocal soloist. It was a moment – well, 15 minutes – to cherish.

The French part of the program was orchestral, opening with Henri Dutilleux’s “Métaboles” from 1964. The BSO had a long, rich relationship with Dutilleux, commissioning works and premiering others. On the 100th anniversary of his birth in 1916, the orchestra has been celebrating his work, playing three orchestral pieces and four chamber works during its chamber music series.

Based on the idea of metamorphosis, the five-movements of “Métabole” transition from one to another without clear breaks, musical information from one movement connecting to the next. On first hearing, such a subtly complex structure is hard to discern, but the piece is sonically attractive on its own terms, and the movements are clearly differentiated. The lush, luxe and lazy strings of the second movement, “Linéaire,” were in sharp contrast to the jagged movements, “Incantatoire” and “Obsessionnel,” that bracket it. “Incantatoire” is rich in plinging, pizzicato strings, percussion and skittering sounds among the woodwinds. The fourth movement, “Torpide,” features gurgling sounds and bleating brass. The final movement, “Flamboyant,” brings the orchestra all together with swirling sounds and a loud tuba making itself heard. Nelsons made what might have easily come apart into a thousand micro-moments cohere. I found the work pleasant, in the lyrical French manner despite its modernism, but it seems to have left the audience, which responded unenthusiastically, cold.

After intermission, Nelsons led the orchestra in two popular 20th century French masterpieces. What can you say about “La Mer” other than no one has captured in musical terms the elemental sound of the ocean in all its many moods better than Debussy did? Divided into three movements, the work can be called a tone poem, a symphony or as Debussy modestly called it, “Three Symphonic Sketches.”

But what does it matter what term you use to describe it? Those of us who live near the ocean can see the waves breaking over the rocks, smell the salt air and hear the barking of sea gulls as they drop their shellfish on the rocks below in Debussy’s Impressionistic score. (The BSO should have been selling fried clams and lobster rolls during intermission.) The program note quotes the critic for the Boston American who wrote at its 1907 premiere, “one can see and hear the ocean better at Nahant or Marblehead Neck.” What he failed to understand is that the sea-washed rocks at Nahant and Marblehead are the real thing and that “La Mer” is a representation, which also functions as an abstract musical composition. Debussy titles his movements evocatively, but you don’t have to pay any attention to a suggested scenario: “La Mer” is the essence of the ocean in its manifold moods.

“La Mer” is so deeply steeped in its institutional DNA that the BSO could probably play it without a conductor. Nelsons didn’t seem to have any original ideas about it he wanted to try out, which may be just as well. But he served as a good traffic cop, keeping the parts clear and differentiated, preventing the piece from turning to mush, which is a danger in this music, and he brought it to a glowing, radiant conclusion.

Ravel’s “La Valse” is a back-handed compliment to the Viennese waltz. Although conceived before World War I, it was composed after the war, in which Ravel fought and lost many friends. What might have been celebratory was now something else, a deconstructed waltz that suggests a culture pulling apart and falling to pieces. Although Ravel maintained the waltz rhythm throughout, the composition increasingly becomes a demented waltz maybe only a Zelda Fitzgerald in the South of France would be able to dance. The BSO played it in full panic-mode, ending its season on a frenzied note.

The night ended not with music but with a ritual farewell. Three members of the organization, two violists, Robert Barnes and Kazuko Matsusaka, and the orchestra’s assistant librarian, John Perkel, were retiring. They were sent off with an ovation that is usually reserved for superstars. The audience’s fervor demonstrated how much it loves its orchestra.

The BSO has announced its 2016/17 season, and, yes, Kristine Opolais will sing again at the final concert, this time the vocal part of Mahler’s Symphony No. 4. In terms of opera, the orchestra will play two complete works, Bartok’s “Bluebeard’s Castle,” led by Charles Dutoit in late October; and – a really big deal – Strauss’s “Der Rosenkavalier” for two performances on Sept. 29 and Oct. 1. Led by Maestro Nelsons, it will feature Renee Fleming, Erin Morley, Susan Graham and Franz Hawlata, big league singers. There will be more vocal music, including Brahms’s “A German Requiem,” Bach’s “Mass in B minor” and Mozart’s “Requiem.” For the full schedule, visit the BSO’s website at bso.org.