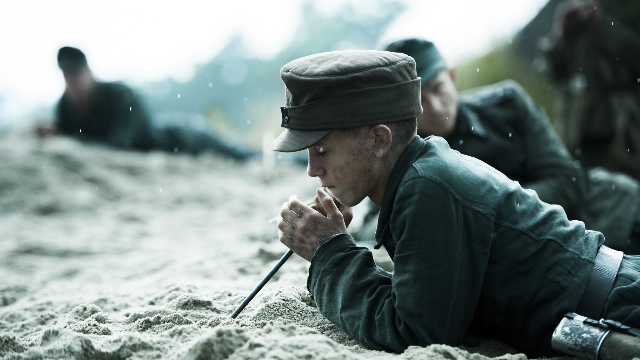 Juvenile German prisoners of war were forced to clear mines from Danish beaches.

“All wars are waged against children” stated  Eglantyne Jebb, (1876-1928) British social reformer and author of “Declaration of the Rights of the Child.”

Two of the finest World War II films are Austrian filmmaker Bernhard Wicki’s “The Bridge” (“Die Brücke”) and Soviet Russian filmmaker Elem Klimov’s “Come and See.” Wicki’s film, based on Gregor Dorfmeister’s 1958 novel of the same name and based on actual events, was released in 1959, some 15 years after World War II ended, when the experiences of war would have been fresh in the German memory.

“The Bridge” tells the story of an incident in the closing days of the war. Seven schoolboys are recruited into a local army unit, but after only one day in the barracks, the commanding officers receive news that the Americans are approaching, and the garrison is called out. Because the boys’ teacher has beseeched the Kompaniechef to keep the boys out of action, he arranges for them to be positioned at the local bridge. Ostensibly they are to defend it, but under the command of a veteran Unteroffizier, the strategically unimportant bridge is to be blown up to spare the village the Allied advance.

Just as the boys settle in, the Unteroffizier leaves to give the demolition squad its orders. When a Feldgendarmerie patrol mistakes him for a deserter, he panics and attempts to escape. They shoot, leaving the boys on the bridge incommunicado, and the stage set for tragedy. With no order to retreat, the boys stalwartly guard the bridge and uphold the military code: “A soldier who defends just one square meter of ground defends Germany.”

“Come and See” was released in 1985, but Klimov had begun work on the screenplay with Ales Adamovich in 1977 as “The 40th anniversary of the Great Victory was approaching….

“I had been reading and rereading the book ‘I Am from the Burning Village,’ which consisted of the first-hand accounts of people who miraculously survived the horrors of the fascist genocide in Belorussia. Many of them were still alive then…. I will never forget the face and eyes of one peasant, and his quiet recollection about how his whole village had been herded into a church, and how just before they were about to be burned, an officer of the Sonderkommando gave them the offer: ‘Whoever has no children can leave.’ And he couldn't take it, he left, and left behind his wife and little kids... or about how another village was burned: the adults were all herded into a barn, but the children were left behind. And later, the drunk men surrounded them with sheepdogs and let the dogs tear the children to pieces.

“And then I thought: the world doesn't know about Khatyn! They know about Katyn, about the massacre of the Polish officers there. But they don't know about Belorussia. Even though more than 600 villages were burned there!”

“Come and See” is set in 1943. Just as the Germans had no men left to conscript toward the end of the war, so the Russian Red Army had fewer and fewer appropriately aged soldiers and began to conscript young boys and elderly men. “Come and See” is the account of one young boy who is literally dragged from his mother’s arms and thrown in with a platoon of Russian soldiers in the waning days of the war. We experience the film, we see it, through his eyes, and a harrowing view it is – almost as hard for us to process as it is for him. The film is close to dialog-less. The words, the syntax, the semiotics do not exist to describe the chaos, the carnage and the utter meaninglessness of it. All the boy can do, all Klimov can do, all we can do is to bear witness.

We in the West – the United States and Europe – wince at the conscription of children into rebel militias in African nations, as if it were a barbaric practice of which we are innocent. Yet, though not enlisted compulsorily, boys as young as 12 enlisted in the British Army during World War I, some to fulfil a youthful ideal of patriotism, others because alternative prospects for survival seemed infinitely more grim. In 1924, after World War I, the League of Nations adopted the Geneva Declaration of the Rights of the Child to protect children “against every form of exploitation.” The problem was that no definition of “child” was universally recognized by the outbreak of World War II.

By the fall of 1941, much of the Soviet Red Army was destroyed and desperate for new divisions. Underage Soviet teenagers, in thrall to patriotic fervor (and superior food rations), wanted to fight the Germans. Some joined at nine or eleven and stayed with their regiments until they were discharged at fourteen or sixteen, often with medals of honor. The Germans, too, removed huge numbers of German youths from school in early 1945. They were sent on what can only be described as suicide missions.

Into this context comes Danish filmmaker Martin Zandvliet’s 2015 “Land of Mine,” among the nominees for the 2017 Academy Award for Best Foreign Language Film. The film’s Danish title is “Under sandet,” and it is a shame distributors did not opt for the literal translation “Under the Sand,” which possesses a certain poetry the clumsy, double-meaning “Land of Mine” lacks. With “The Bridge” and “Come and See,” “Land of Mine” could round out a perfectly curated trilogy on the unwitting child warriors of World War II’s European Theater.

It is May 1945. The Germans have surrendered. The Allies determine that disarmed German soldiers are not prisoners of war but “Surrendered Military Personnel” (SEP, the British designation) or “disarmed enemy forces” (DEF, the American designation) who have surrendered unconditionally. Therefore, the Geneva Convention, which guards against prisoner of war abuses, can be ignored. Surrendered German soldiers can be put to work as slave labor performing the most deadly of tasks. More than 2,000, most barely teenagers, are sent to Denmark and entrusted to Danish authorities, who assign them to clear the Danish coast of two million landmines. More than half will be killed or seriously injured.

The Germans had planted the bombs along the Danish coast in anticipation of an Allied invasion that never happened, and the captured squads of German youths, after some rudimentary training in defusing mines, are handed over to Sergeant Carl Leopold Rasmussen (Roland Møller in a stunning performance), a man so consumed by revenge and rage that his response to his enemy is unmitigated sadism. He allows himself to reason that since Germany laid the mines, Germans should clear them.

The fear we feel for the German boys as they crawl across the sand on their bellies is given some respite by the sheer beauty of the Danish coastal plains. The khaki colored military uniforms, the sand of the beaches, the grasses of the plains give Camilla Hjelm Knudsen’s lyrical cinematography an almost monochromatic feel. The score by Sune Martin is a beautiful contrapunt to the harrowing suspense of the boys’ daily exercises.

Rasmussen is a complex man. We wish time and again that his day in, day out relationship to his charges, just boys after all, will punch a chink in his armor – just as some of us wish that our own politicians would find compassion for lives rent asunder by senseless war. We have seen children dead in the rubble of Aleppo, Syrian child refuges washed up on Mediterranean shores. UNICEF reports that, in new patterns of conflict, “[D]eliberate attacks against civilians are increasingly turning children into primary targets of war.” A United Nations report by Graça Machel, the UN Secretary-General's Expert on the Impact of Armed Conflict on Children, notes that “Armed conflict kills and maims more children than soldiers.” When will we ever learn? “So it goes,” punctuates Kurt Vonnegut’s “Slaughterhouse-Five” with the doomed knell of futility.

WWII  Mmilitary losses from all causes.