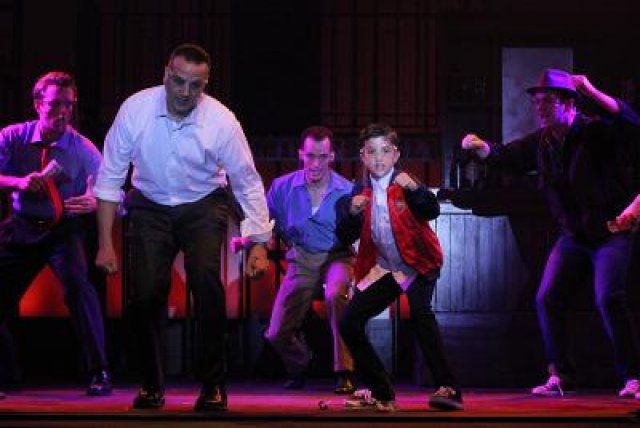 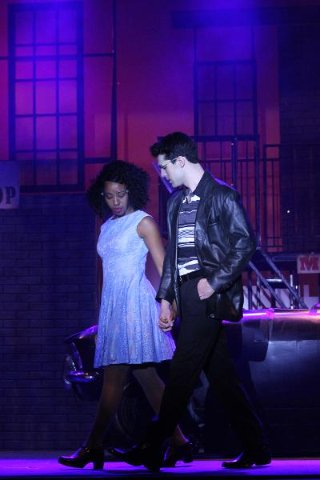 When it comes to musicals, A Bronx Tale is not one of the great ones.

Still, it’s a crowd-pleasing, familiar tale populated by characters we care about. Surely, you don’t have to be Italian or African-American to feel a kinship with folks such as Calogero, Sonny, Lorenzo, Jane, and a host of other colorful characters.

Perhaps you met and admired these characters in the 1993 film with the same title. Robert De Niro directed and co-starred in it with Chazz Palminteri. The movie’s basis is a 1989 autobiographical one-man Broadway show. It’s also called A Bronx Tale. Palminteri wrote the play, basing it on his experiences growing up in the Bronx during the 1950’s and 1960’s.

A mostly admirable regional production of the faithful Broadway musical version of the play and movie is on stage at the professional Broadway Palm Dinner Theatre. The production runs through May 22.

A Bronx Tale is a funny, touching, but sometimes dark and sad memory play and coming-of-age piece. It tackles themes such as loyalty, respect, friendship, family, honor, revenge, and racism. In fact, in this show, the Bronx, N.Y. of the 1960’s looks frighteningly familiar to 2021. Indeed, A Bronx Tale can be painful to watch, given recent events.

But as dark as the story can be, production director Victor Legarreta wrote in his program notes that he wants audiences to focus on the “love.” That shouldn’t be hard; the talented cast conveys earnest love between their characters. For instance, we see it when Lorenzo kneels by his 9-year-old son, Calogero, and gently touches his shoulder or places his arm around him. We also sense fondness when Sonny high-fives young Calogero.

While Legarreta makes the love in the script feel palpable, he also stresses the tension and urgency in the story. For example, notice how Lorenzo holds his son’s head in his hands as he tries to emphasize something to him. Dad wants to ensure his son focuses on him. The stakes are high. In fact, you could argue that Lorenzo is battling for his boy’s soul.

The story unfolds through Calogero’s point of view. When the show opens, we see him as a 9-year-old in front of his home, with his older self narrating the action. The youngster witnesses a killing. And with that, the boy loses his innocence.

Before long, he must navigate a world in which he receives competing advice from the men in his life. It’s a morally ambiguous world, one in which it’s difficult to use black and white labels such as “good” and “evil.” Take smooth-talking Sonny, for example. You can’t simply label him as a villain. No, he’s not a choirboy. In fact, he’s a mob boss and even admits that he gets people to fear him. But underneath his rough and imposing demeanor is a soft, caring heart.  It is evident in the way he treats Calogero.

Sonny’s complexity is part of what makes A Bronx Tale appealing. But the other characters are one-dimensional. A Bronx Tale runs less than two hours, which is short for a musical. There is room to flesh out the characters, and deepen the show in general.

A subplot follows a relationship between a grown-up Calogero and an African American girl named Jane. But at the end, the musical forgets about the relationship; we never learn whether they will remain together. Also, do we really need Calogero to remind us several times that we’re watching “A Bronx Tale?” The musical even dismisses itself. “This is just another Bronx Tale,” Calogero tells us, practically leaving us with those words.

If A Bronx Tale is a familiar one, it is because the musical seems to be derivative of other shows. They include Guys and Dolls, Jersey Boys, and West Side Story. Of course, you can’t compare the memorable songs in those shows to the musical numbers in A Bronx Tale. That’s surprising, since Alan Menken, who wrote the score for such shows as The Little Mermaid and Beauty and the Beast, composed A Bronx Tale’s songs. The 50’s doo-wop and 60’s pop-influenced score, which is mostly forgettable, comprises melodies that reflect the moods in scenes. The most memorable number is “One of the Great Ones,” a swinging, Sinatra-style song. Another number, the upbeat, fast-paced “Roll ‘Em,” might lead you to snap your fingers. But, chances are, you won’t hum the song for long. Meanwhile, Glenn Slater’s lyrics are simple yet serviceable.

During the reviewed performance, it was sometimes hard to make out the lyrics. But generally, the performers boast pleasant, expressive voices. And they prove adept at expressing honest emotion through song. The cast members sing to the robust but not overpowering accompaniment of a live orchestra.

A cool, charismatic, commanding, and sometimes menacing Daniel Rosenbaum imbues Sonny with toughness. But the actor also shows us the character’s softer side.

As Calogero’s father, Lorenzo, Andrew Fehrenbacher lends the character a sincere, loving personality, but is adamant when he needs to be. Also, the performer makes us sense the emotional pain dad must feel because his son is enamored with Sonny.

Sage Spiker makes the grown-up Calogero a likable, affable, yet torn young man. Clearly, he loves his dad and doesn’t wish to hurt him. Given what happens at the end, it would make sense if he at least shed a tear.

Two child actors share the role of “Young Calogero” at age 9. For the reviewed performance, a convincing Ashton Heathcoat gave us an energetic, curious, and nimble youngster. Also, to his credit, the young actor, who shares the part with Caisson Dobson, avoided acting too cute.

Charis Michelle Gullage’s pleasant, sensitive Jane makes it easy to understand why someone would want to enter into a relationship with her.

While you probably won’t remember this musical’s songs, it might be hard to forget the characters. And the show includes several phrases which impart wisdom without preaching. Among the phrases are “The saddest thing in life is wasted talent.”

Certainly, though, this cast and creative team is putting its talent to good use with its winning production of A Bronx Tale.

A Bronx Tale continues through May 22 at Broadway Palm Dinner Theatre. Its location is 1380 Colonial Blvd. in Ft. Myers. For matinee performances, lunch starts at 11:30 a.m., with a 1 p.m. curtain. Meanwhile, for evening performances, dinner starts at 5:30 p.m. with a 7:30 p.m. curtain. For ticket prices and other information, visit https://broadwaypalm.com.