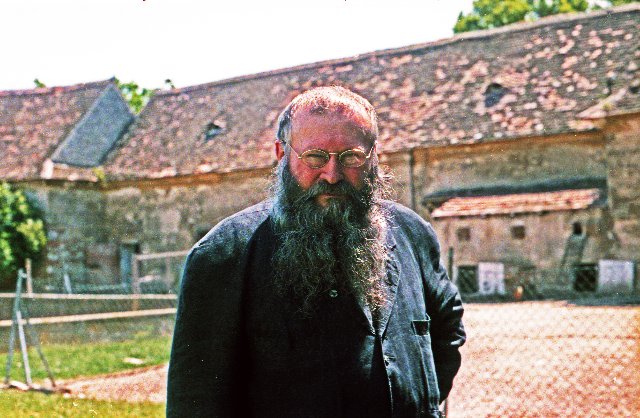 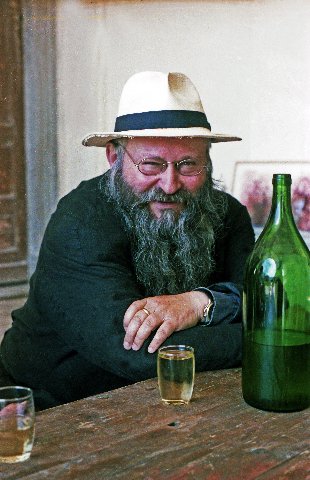 Enjoying wine from his cellar. 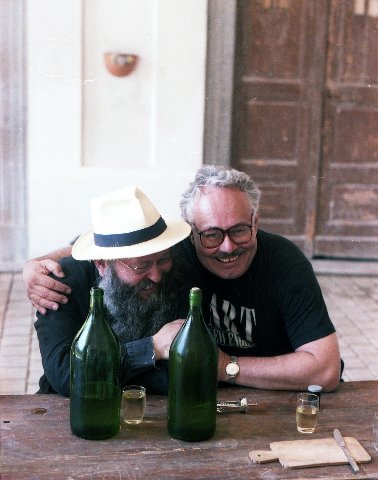 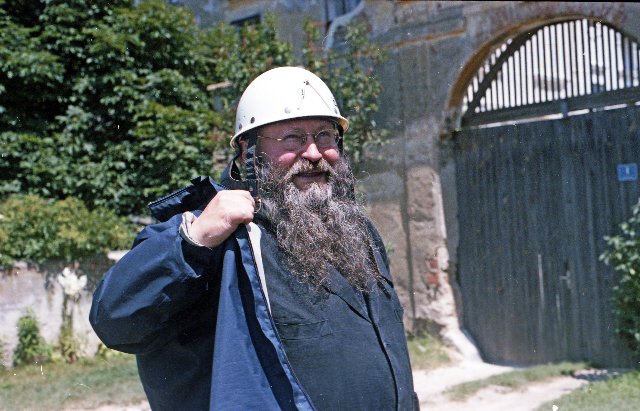 Getting attired for drive to the restaurant. 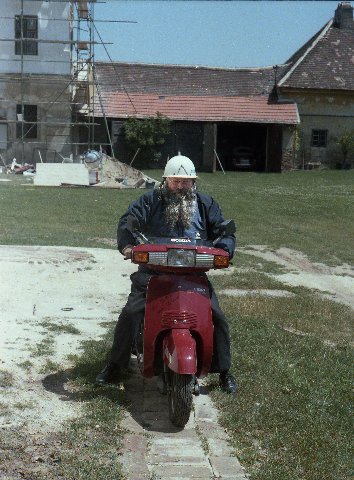 The artist on his Honda. 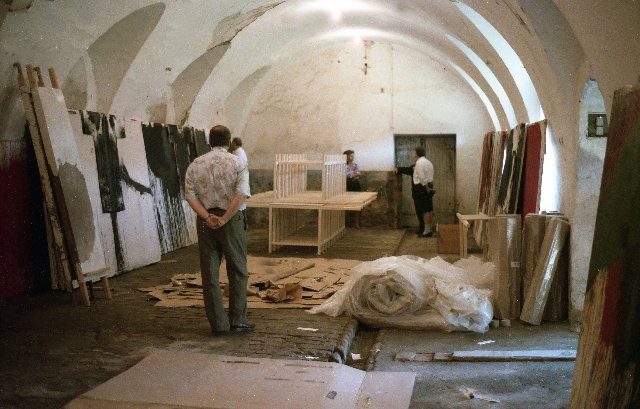 Interior of the studio. 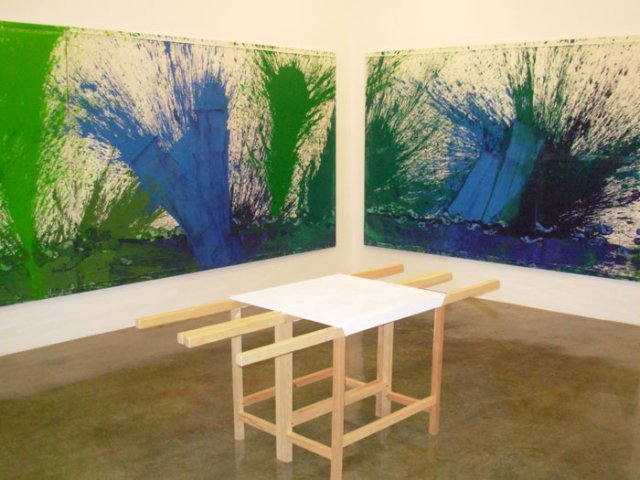 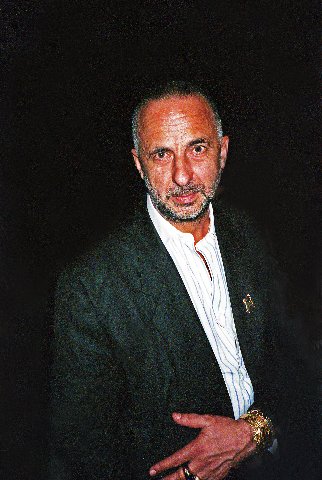 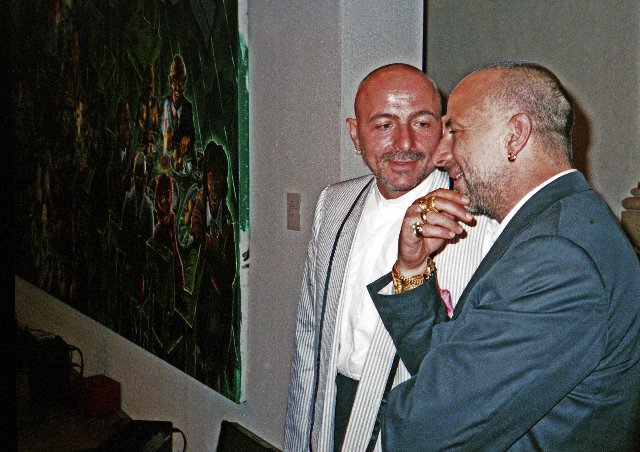 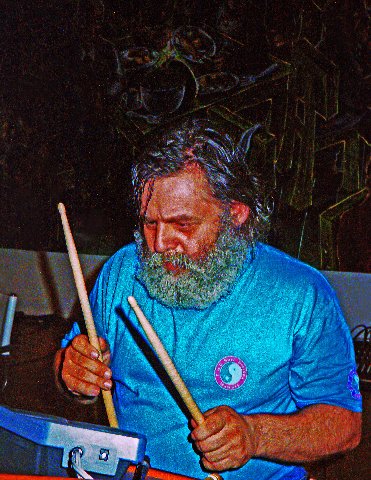 During the late 1980s I got to know their work during several visits to Vienna. That included a day spent with the artist at his Prinzendorf schloss and studios.

The Actionists were active as a group for several years starting in the 1960s. Their performances or actions, often entailing body parts and functions, were so iconoclastic that they resulted in arrests and incarcerations. Nitsch served three short sentences while Muehl, was convicted of sex with minors in the Friedrichshof Commune which he founded in 1972. He was sentenced to seven years of which he served six and a half. Brus was arrested for his performance piece Vienna Walk in 1965.

The actions of Schwarzkogler, generally staged for the camera and short films, entailed mummy-like gauze bandaging, razor blades and simulated mutilation. It is rumored that he died as the result of self amputation of his genitals. In fact he fell or jumped from a window allegedly while on LSD.

By the 1970s with constant threats of incarceration the Actionists disbanded to pursue individual careers.

Other than in avant-garde circles they were not well know in America. The alleged self mutilations of Schwarzkogler were cited by Chris Burden who famously had himself shot and nailed to a Volkswagen.

The 1965 Vienna Walk by Brus is regarded as a landmark in the history of performance art. It consisted of the artist walking through the center of Vienna dressed as what he called a 'living painting' with his body painted entirely white with crude black 'stitching' dividing it and his suit into two halves lengthways.

Muehl first performed his Piss Aktion, in which he stood naked and urinated into fellow actionist Gunter Brus's mouth live on stage, at the Hamburg Film Festival in 1969. It is remembered for its intentional and extreme violation of society's norms.

Muehl, born in 1925, served in the German Wehrmacht in 1943. He registered for officer training, was promoted to lieutenant, and in 1944 took part in infantry battles during the Ardennes Offensive.

The other three were in their mid twenties when they created Actionism. It represented a total break from the Nazi generation of their parents. It was a frontal assault on the traditional values, nationalism, and Catholicism of Austria which continues as a conservative social and political culture. The far right has remained a strong force fueled by anti-immigration movements.

Nitsch is best known for elaborate quasi-religious rituals that entail the blood and guts of animal slaughter. From this early practice evolved his approach to splatter paintings, resembling abstract expressionism, using buckets of blood obtained from butchers and slaughter houses. These works evolved to using red paint as simulacrum for blood.

In 1962, together with Muehl and Adolf Frohner, Nitsch performed the three-part action The Blood Organ in Vienna, for which a joint manifesto was published. At the beginning of the 1960s, he developed the main ideas for his Orgie Mysterien Theater. Nitsch's Orgien Mysterien Theater performances (or Aktionen, as he called them). The scene often involved slaughters, religious sacrifices, and crucifixion, as well as blood and flesh. The performances were also accompanied by music, dancing, and active participants. In his first Orgie Mysterien Theater performance, Nitsch and his friends used animal carcasses, entrails, and blood similarly to a ritual. The cloths, bandages, and other fabrics used in these performances inspired Nitsch to make paintings.

From 1971 on Nitsch organized his Orgy-Mystery Games at the Prinzendorf Castle including the 6-Day Game in the summer of 1998, directed by Alfred Gulden.

In 1972, Nitsch participated in documenta 5 curated by Harald Szeemann; he was also represented at documenta 7 in 1982. In 1975, Marina Abramovic took part in a Nitsch performance.

Nitsch was repeatedly invited to bring his conceptions of art and ritual to the opera. In 1995, he co-directed the Vienna State Opera and created the sets and costumes for Jules Massenet's opera Hérodiade. In 2001, Nitsch was responsible for the stage design and costumes for the performance of the Gandhi opera Satyagraha by Philip Glass in the Festspielhaus St. Pölten in Lower Austria. In 2005, he created the equipment for Igor Stravinsky’s Le Renard. In 2007, he directed the scenes from Goethe’s Faust by Robert Schumann at the Zurich Opera House. In 2011 he was responsible for the scenic conception, design, stage design, and costumes for Saint François d’Assise by Olivier Messiaen at the Bavarian State Opera in Munich.

On 24 May 2007, the Hermann Nitsch Museum was opened in the Mistelbach Museum Center. In Naples on 13 September 2008, Nitsch's long-time gallery owner Peppe Morra opened a museum dedicated exclusively to Nitsch's work, the Museo Archivio Laboratorio per le Arti Contemporanee Hermann Nitsch, which was set up in a former power station.

Most recently, in 2020, 80 current works were shown at the Museum Mistelbach in the exhibition Hermann Nitsch - New Works. After the color red, which he used earlier in his artistic work, and after the color yellow - the color of light and ressurection- Nitsch used bright colors in his late creative days.

Making the rounds of Vienna galleries I saw a lot of work by the Actionists. Once reviled, they were by then regarded as Austria’s most significant and influential Post War avant-garde movement.

I attended a major museum exhibition of work by Jorg Immendorf during the vernissage of which the artist A. R. Penk performed digital music. There was also an exhibition by Immendorf at the renowned Ursula Krinziger Gallery. The top Vienna artists attended the elegant opening and took turns at the Grand Piano. It was interesting to hear Nitsch perform.

A couple of days later the artist/ collector Gerold Hirn invited me to visit Nitsch. He would buy several works from the studio. Actually, there was more than one studio including one for the summer months.

There were stretched canvases stacked against the walls as well as wooden structures designed to display elements of the work. While painting Nitsch wore loose white smocks. Often the work was hands on and he wiped himself on these “shirts.” Later I saw examples for sale in galleries. It was part of the work.

While regarded as a conceptual/ performance based artist the paintings and smocks represented the product of the studio. No doubt revenue from sales supported his other activities.

After the studio tour we gathered at a bench to sample his wine. Coming right from the cellar in unlabeled, two liter bottles it was deliciously cool and refreshing.

He was charming and accessible about my questions particularly regarding the slaughter of animals, blood and guts in his ritual performances. We laughed when he said that he wouldn’t hurt a fly. The animals were slaughtered by professional butchers. While they were used in the actions none of the meat was wasted.

For his rituals which lasted several days guests camped out and were fed. He invited me to attend one of these events and gave me a stack of books to know more about his practice.

After wine and snacks our party was invited to join him at a local restaurant. It was quite a site as we followed him on a motor scooter. That famous beard was flying in the breeze.

Decades later I vividly recall his generosity and hospitality. Today we remember him as one of the great artists of his generation.