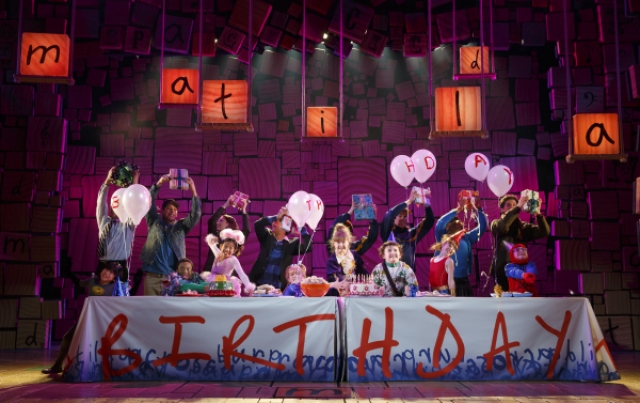 You can associate any one of many ferocious animals with the formidable, fiendish, she-devil of a school headmistress, Agatha Trunchbull, in renown author Roald Dahl’s beloved tale “Matilda.”

But it’s safe to say we all become mother bears whenever we watch adults – particularly of the immature, bratty, foolish, irrational and mean-spirited variety – mess with children.

And when those “revolting” youngsters are actually more mature, wise and ethical, we’ll always gladly side with the youth -- and revolt with them.

Audiences across the country are no doubt rooting for Crunchem Hall’s indomitable students. These fictional children are traveling on an equity national tour of the Royal Shakespeare Company’s mesmerizing production of “Roald Dahl’s Matilda: The Musical.”

The stage musical, based on Dahl’s classic novel, is running through May 7 at Ft. Lauderdale’s Broward Center for the Performing Arts before playing venues in other cities.

The show, which has taken the stage in various parts of the world, including London’s West End and Broadway, has won 50 international awards, including the Tony. It ran for 1,555 performances on Broadway, closing Jan. 1 of this year.

It’s not a musical without flaws. Still, it combines eye-popping spectacle, catchy songs, clever, witty, lyrics and a poignant story. The result is invigorating, riveting and touching theater.

Under director Matthew Warchus, the child actors marvelously match the intense, realistic performances of the adult cast members in movement, gestures and spoken words, which seamlessly segue into song. The cast, wearing character-defining costumes designed by Rob Howell, sing impressively, backed by a live orchestra. The only downside: sometimes the orchestra drowns the actors out, making lyrics hard to understand. Cast members skillfully execute Peter Darling’s choreography, which tells the story as much as the spoken and sung words.

Audience members on opening night Tuesday were treated to the fearless, commanding performance of Gabby Gutierrez, who shares the title role with two other girls.

Gutierrez endows Matilda Wormwood with an intensity, confidence, fearlessness and conscience you don’t see from many adults. The young actress demonstrates remarkable stage presence and has obviously internalized her role thoroughly.

As good as she is, early on in the production, there’s room for improvement. Her Matilda, at first, is so straightforward, unsentimental and armed with such confidence, the performance imparts a bit of arrogance. Of course, to portray Matilda as overly sweet and cute would be to misinterpret the role. Still, you couldn’t help but wish for just a tad of innocence, curiosity and a sense that books and knowledge bring joy to Matilda. We get a sense of those feelings as the production progresses.

Altogether, the loud ovation Guiterrez received during her curtain call was well-deserved on opening night of the Ft. Lauderdale run. By the end of the musical, you wanted to wrap this special little girl in your arms, just like the aptly-named teacher Miss Honey (a sweet, loving, determined Jennifer Bowles) does after the foolish Mr. and Mrs. Wormwood leave behind their daughter.

It’s hard to understand how anyone would want to do that; we know somebody like Matilda. OK, so maybe your young acquaintance or friend doesn’t possess telekinetic powers and isn’t a 5-year-old who reads “Crime and Punishment.”

Perhaps your neighbor’s a small girl who’s a child prodigy, but her talent is ignored by her insensitive, uncaring and selfish parents, who aren’t fit to be a mother and a father. Maybe she’s a gifted child whose folks refuse to place her in advanced classes because it’s their way or no way.

Dahl (Sept. 13, 1916-Nov. 23, 1990) would be far from so stubborn if he had the chance to witness musical book writer Dennis Kelly and composer and lyricist Tim Minchin’s faithful adaptation. It follows the plot closely enough to satisfy “Matilda” fans, while featuring changes that enhance the mystery of Matilda and her unbelievable abilities. The adaptation honors signature Dahl’s dark, twisted humor, which might be a little overboard for wee little ones. But the young and young at heart will probably appreciate the striking visuals, while adults and older youth should value the lessons of tolerance and acceptance retained from the novel.

One of the drawbacks of the stage show is that Matilda repeats the words “that’s not right” so often we grow tired of hearing it after a while. Surely a brilliant girl like Matilda can convey that same message using different words.

Matilda is a girl who adores stories. So what better way to depict her character than to have her not just read adult books (like she does in the novel), but tell a story. In the musical, she does just that, with librarian Mrs. Phelps (a riveted, child-like Keisha T. Fraser) listening.

Hugh Vanstone’s lighting design, perhaps just a bit overdone, nevertheless deftly captures the mood and intensity of a scene, as well 1as the fantastical elements of the tale. Simon Baker’s dark and foreboding sound effects enhance the effect.

The sound effects are particularly effective during scenes involving Trunchbull. In the novel, Dahl paints a portrait of an over-exaggerated character who is almost impossible to depict on stage. Dahl portrays her as some vile, beastly alien-like monster that makes our suspension of disbelief a challenge, even knowing that “Matilda” is a fantasy.

In this production, Dan Chameroy (most if not all actors portraying Trunchbull have been men) is so vile that he makes Trunchbull earn our hate. His child-despising Trunchbull makes Miss Hannigan from “Annie” seem like a girl scout adviser of the year.

Like a slithering, silent, poisonous serpent or a lioness stalking her prey, Chameroy’s Trunchbull sneaks up on the students (she calls children “maggots”).

Chameroy, sporting a pigtail that is erect in the middle of his head, shouts thunderously, “You!” as he shoots a finger at a student to call on him or her. Menace drips from Chameroy’s voice, even when he speaks in understated, sly tones. And then there’s his ferocious, guttural “How dare you?!?” after Matilda talks back to “The Trunchbull.” That’s not a wise idea; this woman competed in hammer throw, shot put and javelin in the British Olympics. Misbehave, and she just might pick you up by the ear, spin you around and throw you some 100 yards over a fence.

One weakness in Chameroy’s performance is that when Matilda finally gets the best of this beast, the pay-off to which we feel we’re entitled isn’t entirely satisfying. The Trunchbull merely runs off, supposedly scared, without conveying hysteria. We want to see her suffer, tortured, just as the children must have felt when she locked them in the “Chokey” – a dark, narrow cupboard with spikes in the walls and nails sticking up from the floor.

A stark contrast to that claustrophobic, nightmarish space is beautifully conveyed in the song “When I Grow Up.” During the number, the children sit or lie on their stomachs on moving swings, looking forward to their adult years.

The children sing as they swing freely, as though happily into their future. The melody is optimistic and serene, mirroring their relaxed state.

The song seems out of place; it doesn’t flow naturally from the preceding dialogue. “When I Grow Up” would work perfectly if it’s sung after a child is locked in the chokey.

Matilda’s parents are played by Matt Harrington and Darcy Stewart as laughable, cartoonish nitwits who convey exasperation and angry annoyance at Matilda. As Mr. Wormwood, Harrington brings to mind actor Daniel Stern in “Home Alone,” only with a British accent. Think of Stewart’s Mrs. Wormwood as a combination of one of Cinderella’s stepsisters and Lily St. Regis in “Annie.”

The couple are likely jealous because Matilda’s so smart. Her brain comprehends complex concepts and operates at a much faster pace than others.

Minchin has said that he tried to put audiences inside Matilda’s head; for every one thought we have, she has 10 at the same time, he noted in a video.

Matilda’s complex mind is suggested in Rob Howell’s set, which features a proscenium of blocks, each featuring letters, some spelling out “Matillda.” At various times, the “curtains” of blocks come together, as though Matilda is assembling a complex puzzle.

Whatever she’s doing, you can’t help but admire and pull for this little girl who sprung from Dahl’s vivid, imagination.

For more information about tour stops, ticket prices and venues, log onto http://us.matildathemusical.com/tour/engagements/