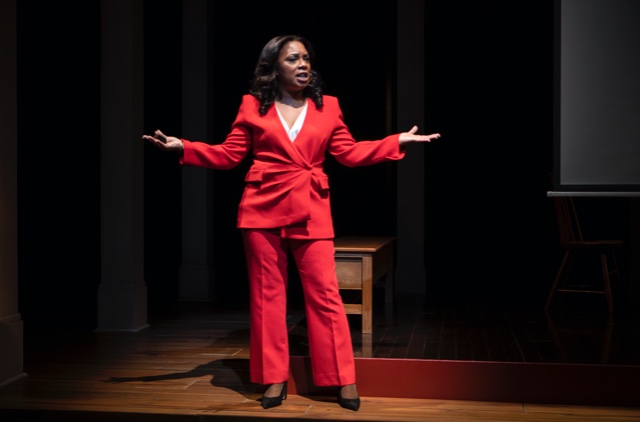 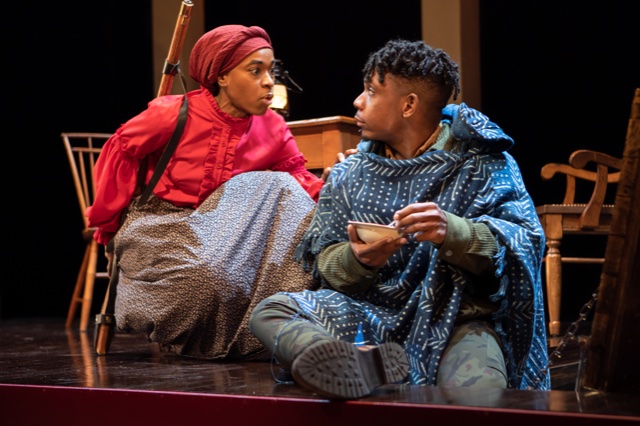 Kristolyn Lloyd is an upstart, muring her brother played by Elijah Jones to run. 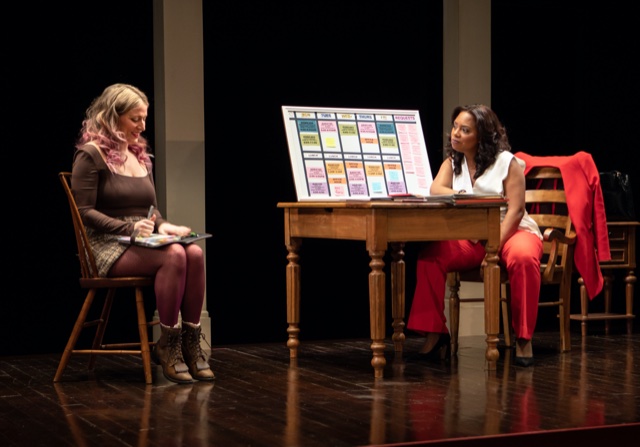 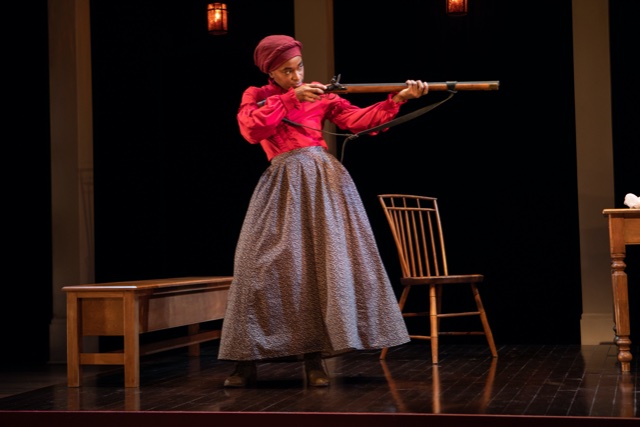 Sara is ready for action in Confederates

Dominique Marisseau has taken a loaded topic, the Big Mamma of black plantation culture, and fixed her in a space during the Civil War mashed up with the present.  Big Mamma is bursting out of her role in the 1860s, getting the notion that with gun in hand and books to be read she can be free.  In the present, she is a university professor, nurturing a young black student, a white student and a black female assistant anxious for tenure.  Tyler Perry and Martin Lawrence have made fun of Big Mamma. The strength of Tennessee Williams’ white Big Mamma in Cat on a Hot Tin Roof, comes from a springboard off this icon of plantation life.

Marisseau has a a gift for language.  Her characters are deep and shaped. She is assisted in the current show by director Stori Ayers.  Ayers is an actress and also a writing assistant to Marisseau, whose work she deeply grasps. There is a vigor in the physical movement of characters which enriches their intellectual depth.

In preliminary notes to her play, Marisseau states that this is more ironic and sarcastic and funny than anything else she’s written.  It is also a mash up of time: the middle of the Civil War and current academic life.  The central characters are both off-center takes on Big Mamma. Andrea Patterson and Kristolyn Lloyd lead a superb cast. Elijah Jones, doubling as Sara's brother and an ambitious black student, is forceful and subtle at the same time.

The language of the past and present is similar.  Reading comes more naturally in the 21st century. Lucky blacks learned to read surreptitiously a hundred and fifty years ago.  Marisseau imagines that conversations took place on taboo subjects, like picking up a rifle and running away. She successfully tackles the idea that these are not silent slave servants.

While the most feared relationship might have been a white man’s love for a black woman who reminded him of Black Mama, the black woman at whose breast he suckled, in Marisseau’s take, we have the white daughter of the master enamored of the black female slave she grew up with. This love is a shock to the slave and to the audience. Kenzie Ross, who doubles as a white student in the present, is perfect in the role, timorous, yet insistent.

The pace of the play is brisk. Transitions through time take place quickly.  Often they are filmic, fading from one scene to the next. Quick costume changes in characters who double in past and present punctuate and add to the lifefulness.

Confederates is a complex play that works.  For a country which has had problems grappling with our past cruelty to a race of people, it feels refreshing:  it almost says, what we did was crazy.  That we continue to do it is crazy too.

These two big Mammas are united over time by their similar functions.

At the end, Sandra, the college professor, says:  This is what it means to be at this institution.  To know deep in your core that there will never be justice for you here.

And Sara says, Long as there’s a plantation, ain’t none of us free.