Man of La Mancha Is Bulletproof

At The Palm Canyon Theatre 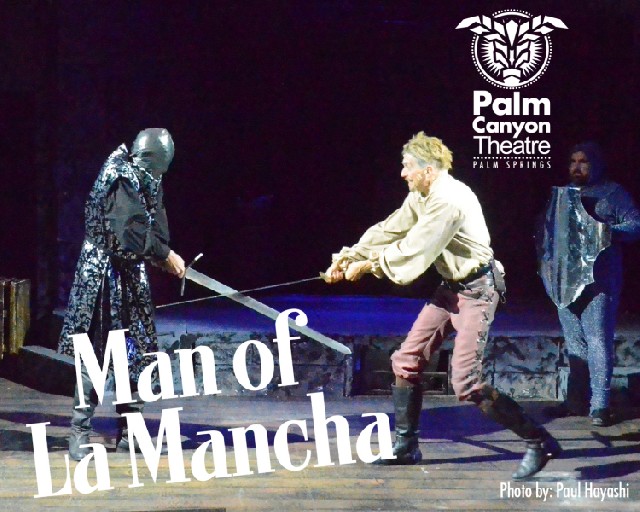 There are only a handful of musicals that one could classify as being bullet proof as far as audiences go. If the actors are breathing and the singers can sing on-key, then chances are good that the production will be a winner. “My Fair Lady” “Company”  “West Side Story” and “Man of La Mancha” are among musicals I would classify as bullet proof.

The Palm Canyon Theatre (PCT) opened a brilliant and highly entertaining production of “Man of La Mancha” last weekend. As good as the musicals are at the Palm Canyon Theatre, this particular production raised the entertainment bar several notches kicking this terrific show to a higher level. There is really no substitute for great writing, wonderful melodies, and inspired lyrics. When good performers have the luxury of mixing these ingredients together, one will always end up with a delicious tasting award-wining production.

“Man of La Mancha” written by Dale Wasserman, with music by Mitch Leigh and lyrics by Joe Darion had ‘Blockbuster” written all over it when it debuted on Broadway in 1965 (running for over 2300 performances). The show nabbed five Tony Awards winning The Tony for Best Musical, and Best Actor, making a star out of Richard Kiley for his Don Quixote portrayal.

It’s the second time around being Don Quixote for the valley’s premiere Baritone and actor Mark Almy. He performed the role at the Palm Canyon Theatre some fifteen years ago and has only gotten better (if that is possible) over the years. When he makes an entrance… he makes a commanding entrance! The tone of this wonderful musical production, brilliantly directed by Scott Smith, has enough energy to light up the entire Coachella Valley. The cast of twenty talented and dedicated cast members of actors, singers, and dancers bring to life Dale Wasserman’s inspiring Book/Libretto in a winning fashion with style and flair.

In the role of the beautiful, fiery, cynical, serving wench Aldonza, is Svlvia Tethal, who also serves as the production’s choreographer. The possessor of a beautiful classically trained voice, Tethal brings an intensity and commitment to her portrayal of Aldonza, the world-weary part-time prostitute, which is riveting to watch. Her choreography highlights some of her best work to date, and her dancers are equal to her challenge of graceful, yet energetic dance movements.

Valley favorite Tom Warrick plays Sancho Panza, the squire and devoted servant to Don Quixote. Warrick is master of comic timing and his lyric baritone is just what is called for as the comic relief character. He never disappoints.

In large cast shows it’s always difficult to list everyone, but there are always standouts and this splendid production is no exception. Allegra Angelo, delivers a winning turn as Antonia and when she’s onstage the audience can’t their eyes off her. Douglas Paul as the Governor/Innkeeper, brings his A game to the proceedings; displaying some his best work in the process. Peter Mins as The Padre, is an actor who always delivers 100 percent whether he has the lead role or is carrying a spear, and the audience can tell that he’s enjoying every minute it. Ben Reece as Dr. Carrasco, brings his lilting tenor voice combining his character’s mixed emotions portrayal as Don Quixote’s friend and then his foe in the “Knight of the Mirrors” number.

There are 30 musical numbers and reprises in Mitch Leigh and Joe Darion’s incomparable score. The most memorable being the incredibly inspiring “The Impossible Dream” sung with power and poignancy by Quixote and the haunting “Dulcinea” sung by Quixote and then reprised with Aldonza. It’s great stuff.

The cast is chock full of talented artists and boasts an exceptional company of gifted ensemble performers. The secret of successful musical productions is the dedication of the ensemble to always be in the moment; always focused and to be generous to a fault when it comes to sharing the stage with their fellow actors. There are no small parts in “Man of La Mancha”, everyone shines; adding up to an exhilarating display of individual excellence within a team framework.

As usual, the technical credits at the Palm Canyon Theatre are first rate. The impressive set design by resident design wizard J.W. Layne is breathtaking in its overall visual impact yet   functional when required for the actors, dancers, and singers to perform their magic. Whatever “sound bugs” that plagued “The Secret Garden” production thankfully have disappeared from “Man of La Mancha”. The costuming team led by Peter Mins includes: Delinda Angelo, Colleen Walker and Charles Rabb who provide the grunge and grit one would expect to see in the costumes of late 16th century Spain. Don Quixote’s costumes, however, are works of art in themselves.

“Man of La Mancha”, staged by Scott Smith is an impressive and entertaining production where everyone can indeed walk out of the theatre humming strains of glorious music and singing inspiring lyrics that brings lumps to one’s throat. They don’t write or produce musicals like this anymore sorry to say, so don’t miss it! The musical performs Thursdays, Fridays, Saturdays, and Sunday at the Palm Canyon Theatre through April 26. Call the box office for reservation and ticket information at 760-323-5123.