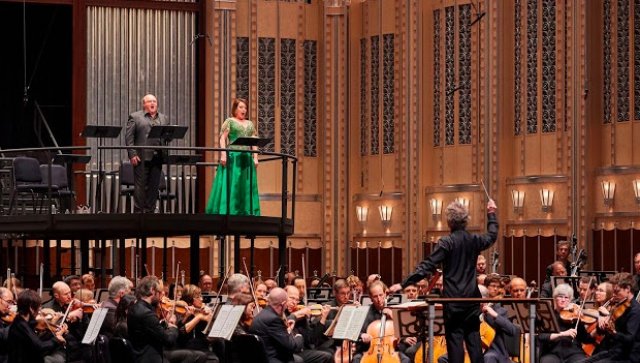 Gerhard Siegel, Nina Stemme and the Cleveland Orchestra in Tristan and Isolde.

Tristan und Isolde is not an ordinary opera. Wagner's work stripped almost all the action and plot away from the legend of the medieval knight and the Irish queen and their illicit affair. Aside from one sword-thrust, there is very little action. Everything is internal in this mysterious opera, with turbulent swirls of chromatic orchestration bringing the psychological inner life of the characters to vivid life. In other words, as the Cleveland Orchestra proved on Thursday night, this is a perfect opera for the concert hall.

Thursday's performance was the second of three this week at Severance Hall, the orchestra's home base, under the baton of music director Franz Welser-Möst. It pitted the formidable Swedish soprano Nina Stemme as Isolde opposite tenor Gerhard Siegel.  Siegel has a potent instrument, but is more associated with character parts such as the villainous dwarf Mime in Wagner's Siegfried. Casting him was a gamble, one that paid off as he had the endurance to get through the long and challenging evening. The princess and the knight were surrounded by a strong supporting cast, singing from a specially mounted platform that loomed above the orchestra like the prow of a great and invisible ship.

The first act belonged to Stemme. Her Isolde was a slow-burning fuse that exploded into fusillades of sound over the vast, rolling wave of the orchestra. She brought a laser focus to her outbursts of rage against Tristan, the man who killed her lover and was now bringing her to Cornwall for an unwanted marriage with his uncle King Marke.  Stemme raged, stormed and blustered, answered with raging breakers of sound rolled forth by Welser-Möst. When she and Mr. Siegel drank the love potion and turned to each other at last, it was a profound and weighty moment.

Act II opened with another turbulent scene for the soprano, as she debated putting out the torch and summoning Tristan to their nocturnal rendezvous. This is the point for the two lovers to sing together at last, trading passionate declarations before sinking their voices to a lower and softer register for the intimate "O sink, hernieder, nachte der liebe," some of Wagner's most sensual writing.  Siegel and Stemme proved a pleasing match vocally, with his dark, grainy tone contrasting with her sharp, silvery sound. Welser-Möst took the role of accompanist here, and if his leadership did not quite achieve a sense of transfiguration, it was still more than competent.

As Brangäne, Isolde's faithful handmaiden, Okka von der Damrau sang an impressive offstage Watch Song but failed to induce the sense of transcendental float that comes in the dreamy middle part of this act at the very best performances. However, that attempt at transfiguration was shattered by Kurwanal (Alan Held).  Held, a veteran baritone with a big voice, ruined the idyll by bursting in to tell Tristan to defend himself. This led to the arrival of his rival Melot (Sean Michael Plumb) and King Marke (Ain Anger) in the opera's "gotcha!" moment.  Anger proved to be the discovery here, a young Estonian bass with dark, firm tone and a mature presence that belied his years. Plumb had the best characteristic of a Melot, you sort of wanted to slap him every time he opened his mouth.

Tristan is wounded in the denouement of Act II and takes most of Act III to die. This was Mr. Siegel's show, accompanied by his faithful retainer Kurwenal. Mr. Siegel fell firmly into the category of singers that favor vocal firepower over beauty of tone, but his trumpet-like instrument gave him the fortitude needed to grip the listener through the four demented monologues that Tristan sings as he raves. Here also, the concert setting proved a benefit, as one was free to admire the psychological probing of Mr. Siegel's performance without any of the visual ricketa-racketa that directors often add at this point.

That sense of aesthetic purity only increased the impact of Stemme's final entrance, to discover Tristan's corpse (Siegel, slumped in a chair) and sing the opera's last scene, the Liebestod. This is Isolde's final ascent into a starry death-dream over Tristan's corpse, an evocation of sensual color, light and even scent in the libretto. As Welser-Möst drew perfumed clouds of sound from his orchestra, the singer soared overhead, climbing the rising progression of notes to an unimaginable height of ecstasy before sinking down again, the chromatic dissonance of the opera slowly resolving and refocusing itself in strings, winds and harp. It was sublimity itself, transcendence finally achieved from yearning and anguish.  (Reprinted with permission from Superconductor.)