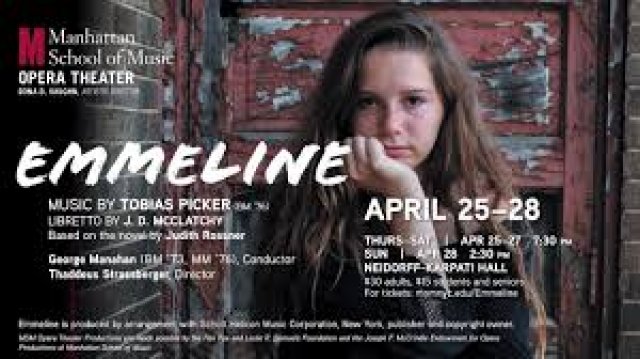 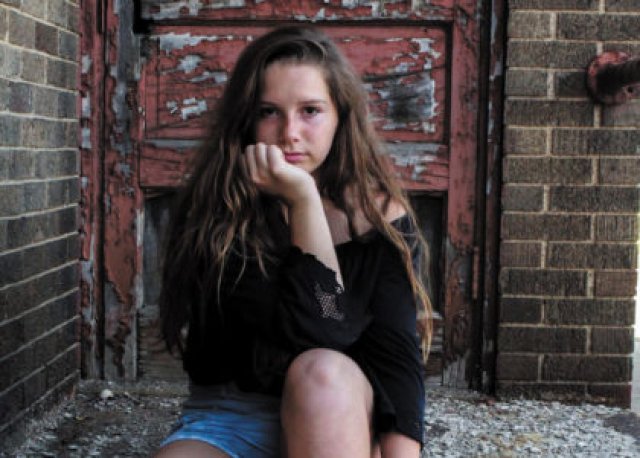 Manhattan School of Music mounts a superb production of Tobias Picker's Emmeline this spring. Directed by the supremely gifted Thaddeus Strassberger, the work has been moved into the present and resonates as a universal tale. George Manahan, who conducted the world premiere of the work at Santa Fe Opera over twenty years ago, led the orchestra revealing all the richness of the score. Young talent created unforgettable characters in this re-telling of a Greek myth.

Of particular note are Madalyn Luna in a debut role as Emmeline.  Her voice is full with light vibrato used to express heightened moments of love and pain. Laureano Quant is smarmy, seductive and authoritative as the sexual predator. Singing the difficult role of Matthew Gurney, a man in search of love, Samuel White conveys a boy's wishful hopes and a man's desires.  All of the singers were first rate.  The acoustics of the renovated Neidorff-Karati Hall are superb and suit singers well.

Bringing the story forward from mid-19th century Lowell, Massachusetts to a more contemporary setting worked well.  The set created by Paul Tate dePoo III opens from a curtain of impenetrable wood.  As the wood curtain lifts, we are inside the Mosher family at the funeral service for their youngest child who lived only a few days.  Their world is harsh and tough. It is also firmly circumscribed.  Go outside it, and you are walled away.

Lighting is used to change the emotional setting of scenes.  Particularly effective are neon lights that dance to the music in the factory.  The beat is four.  The flashes are in fours.  The ceiling lights in the library, scene of the seduction of 13-year-old Emmeline, are also grouped in fours.  The hymn that Picker incorporates later in the score has four beats.  It is "Rock of Ages," and the wall that will eventually exclude both Emmeline and Matthew Gurney is solid like a rock, impenetrable, misunderstood Christianity.

Emmeline feels more universalized than updated.  Emmeline has a Hester Prynne problem, bearing a child out of wedlock. She is carted off like Blanche du Bois. Yet there is a sense in this Emmeline portrayal that she will make something of her experience in the madhouse and not simply wither. She is a strong woman. Everything she wants has been taken from her.  Her music and her personal forcefulness suggest survival.  Thaddeus Strassberger's take on the piece has an uplift at the end.  So too does the glorious music of Tobias Picker.

J.D. McClatchy is the dean of librettists.  His savage, emotional intensity is honed to perfection with tonal control. His words fit well in the voice and also have a rhythm and rhyme which seduces the ear.  Picker has used his words well.  Lyric lines run on, but are graceful and intriguing.  A drum beat persists at the lowest end of the music.  We feel its presence as an often ominous driving force.  It is a heartbeat that gives life to the production.

A first rate evening of opera theater at the Manhattan School of Music.