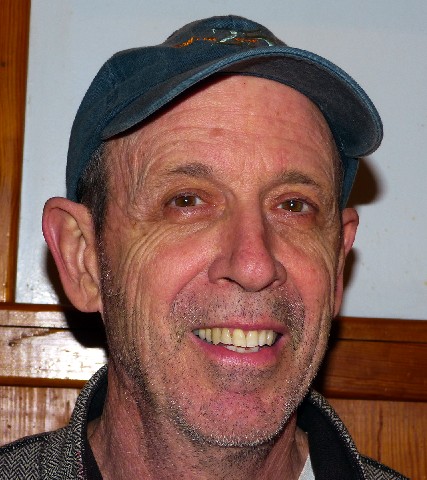 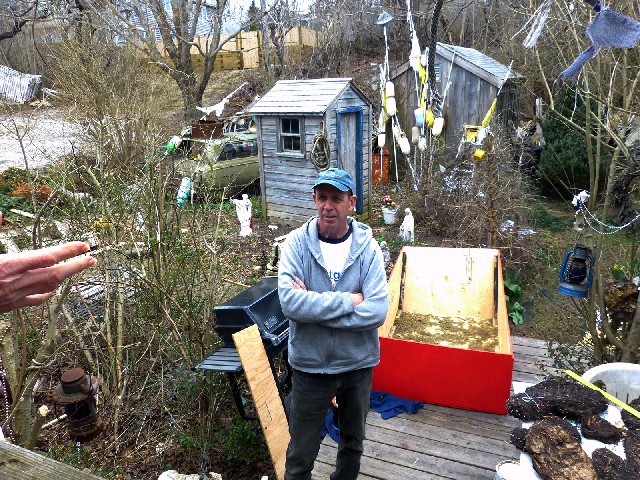 In the back yard with Jay Critchley. Giuliano photos. 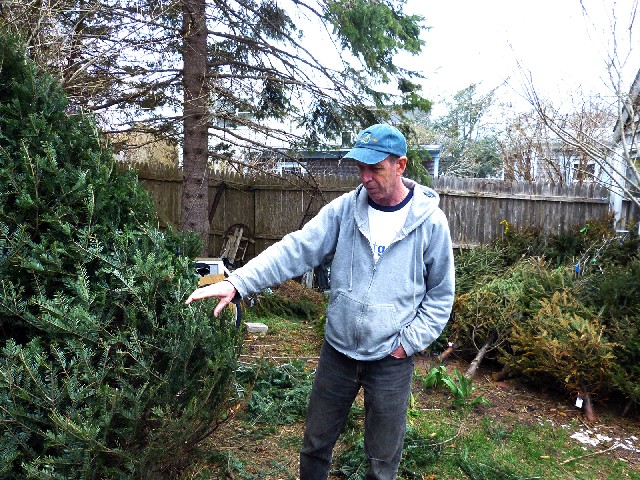 Preparing a Christmas tree for the exhibition. 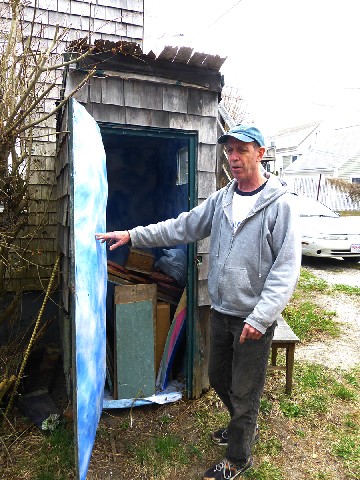 The Out House will be in the show just in case. 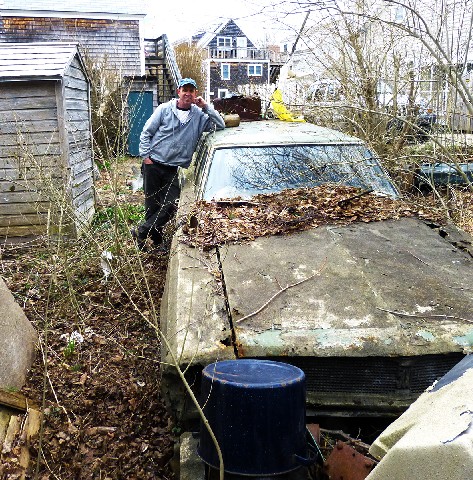 With the Sand Car that started his career as an artist. 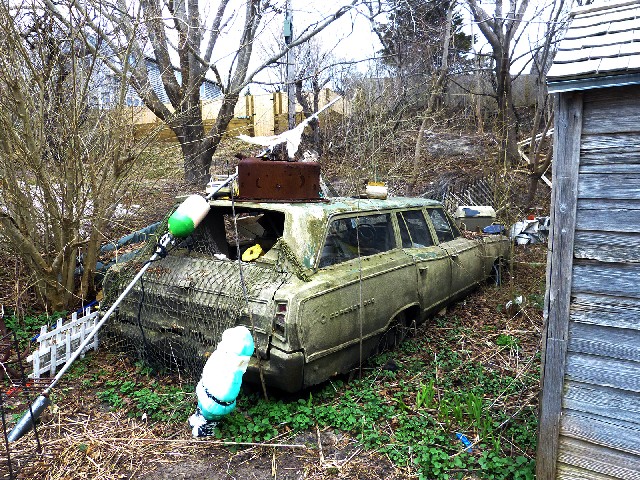 The iconic Sand Car is rusting away in the artist’s back yard. 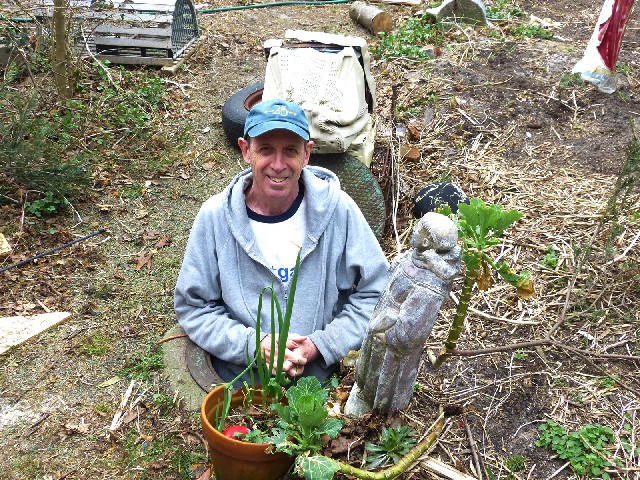 Underground theatre in the septic tank. 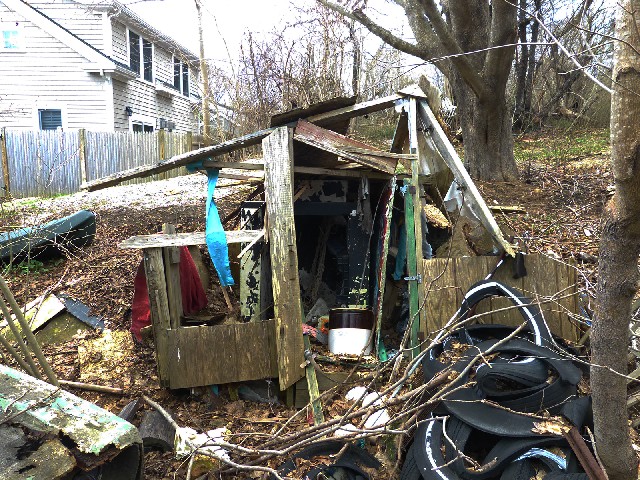 Shacking up surely a favorite work of his neighbors. 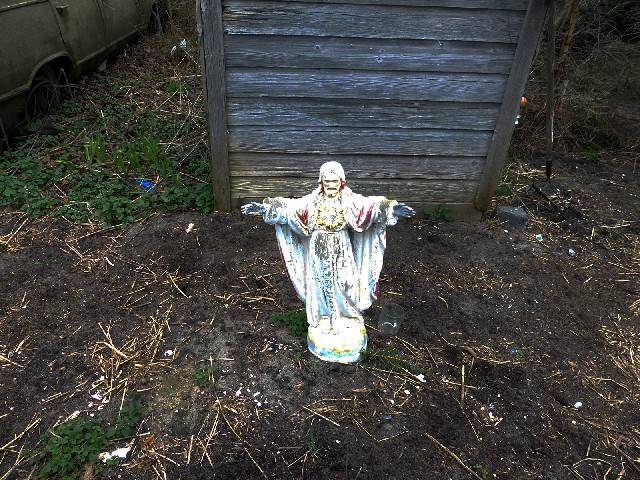 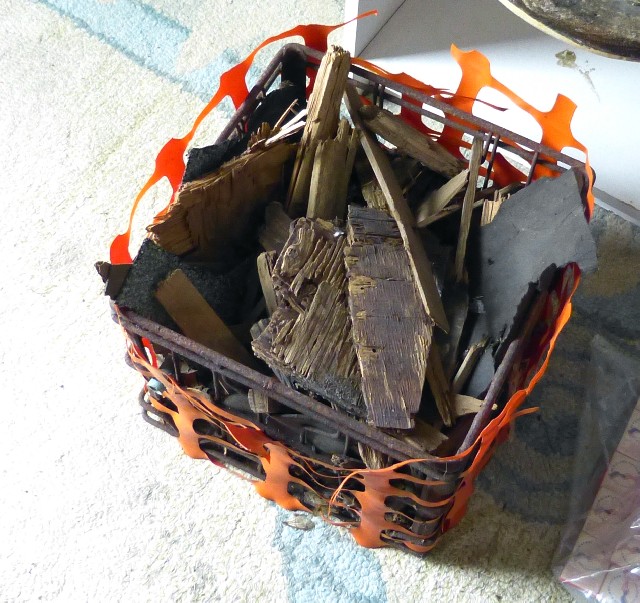 The last woodcut of Blanche Lazzell. 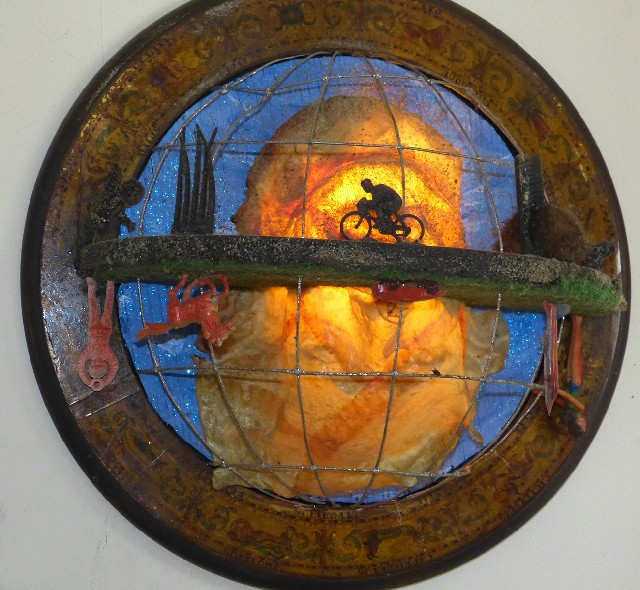 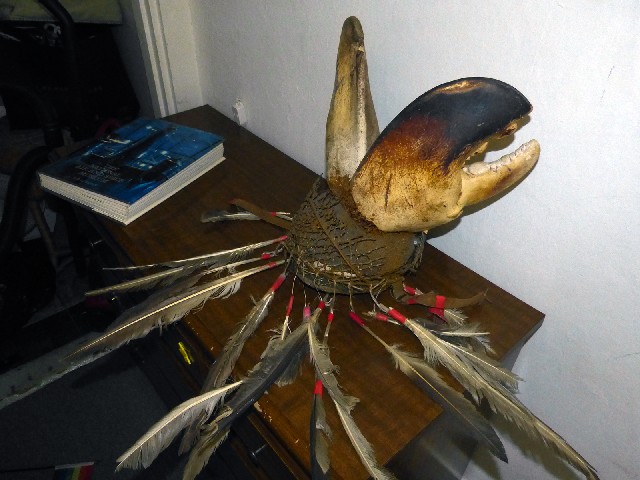 He is known for his hats. 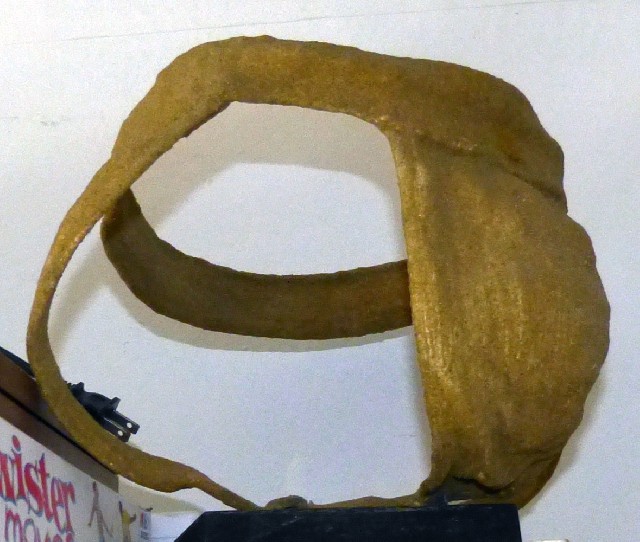 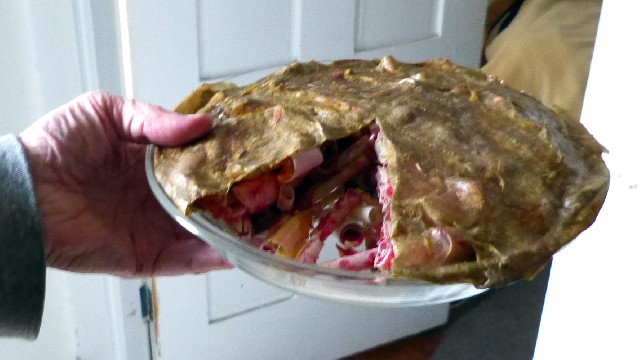 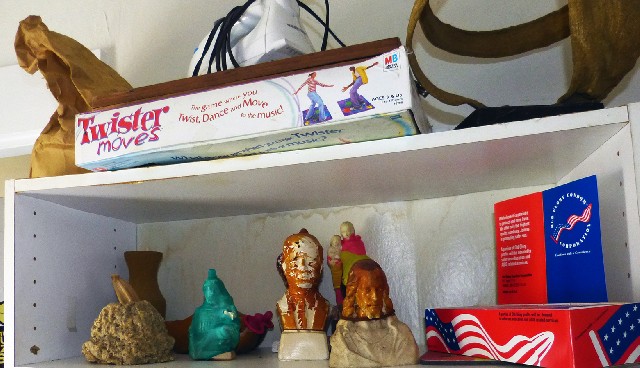 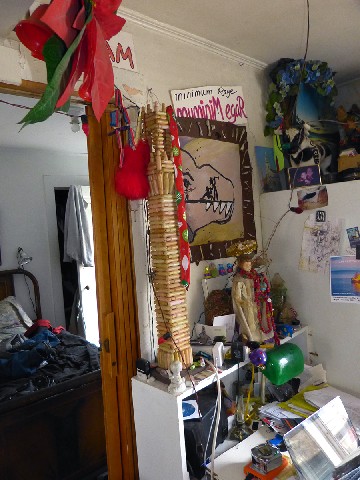 The Pilgrim Monument in tampon applicators. 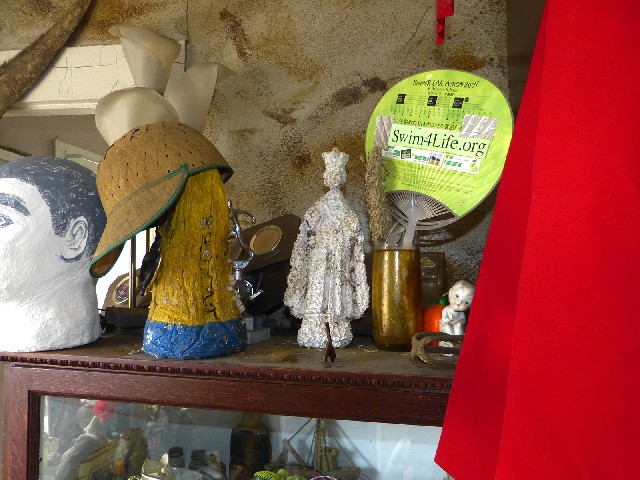 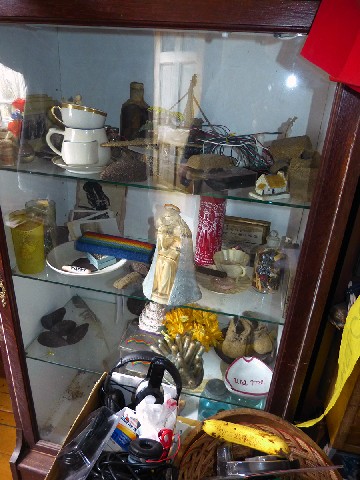 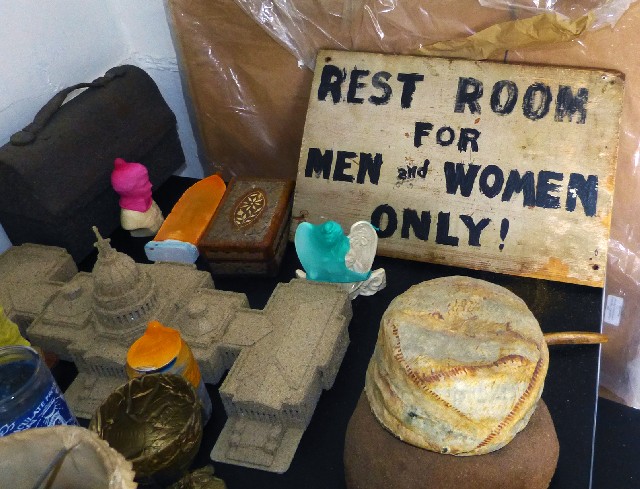 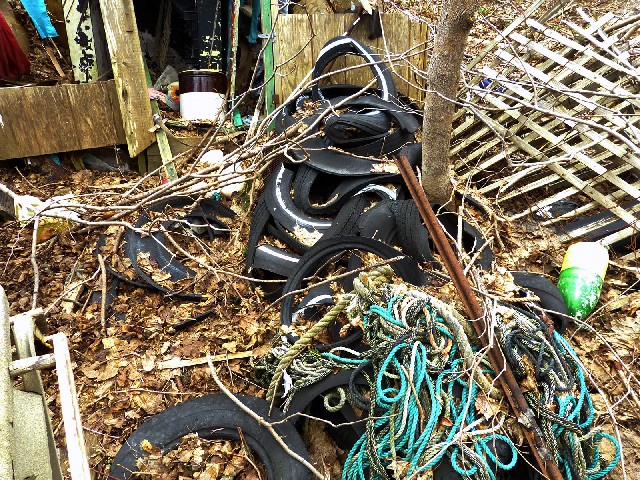 Tires from a piece may come in handy some day.

Recently, during a week in Provincetown, we connected with a curiously quirky and humorous friend the artist/ activist Jay Critchley.

We had dinner at Napi's with Jay and Chris Busa, the publisher of Provincetown Arts Magazine, which is producing the catalogue  for his first museum solo exhibition at the Provincetown Art Association and Museum.

It was too soon to see the work in the museum but Jay invited us to visit the next day and see what is being gathered for the show.

Given the red hot real estate market that is evicting artists from the Lower Cape it is fortunate that both Chris and Jay bought their homes decades ago.

Looking about at the clutter in his home that spills out into the chaotic yard behind he gestured dramatically with a sweep of his arms "If I didn't own this place what would I do?"

During the peak season he rents a funky second floor space that, during our visit, was packed with stuff on its way to the museum.

Recently on Facebook there was an image of Jay holding a newborn grandchild. His third actually by a son of the woman he divorced years ago after discovering himself during a visit to Provincetown. Feeling at home he never wanted to leave. He describes feeling close to his son but not with an extended family. He was one of thirteen in a conservative Irish Catholic clan.

Having come out and gone through years of work he is at peace with himself and aspects of the church. He says that he can't stop being Catholic any more than one might stop being Jewish.

Of course how that manifests itself for Jay is totally over the top. In varying states of decay and alteration there are plaster statues of the Virgin and Saints stuck in everywhere.

Some are layered over with disintegrating condoms or stretched fish skins.

Four years after he came out sexually he came out again as an artist. Looking intently at me like a laser  that burrowed into my understanding and demanded total and serious attention he explained that it was about identity and self. That happens with him as one careens from the hilarious to deadly serious. You have to stay on your feet and play rope-a-dope with him.

Looking back he wasn't sure if one of his first efforts was a work of art let alone that the individual who made it was an artist.

Indeed nobody knew. Which is why it was so successful and perplexing.

He rented a season long space in the parking lot in the center of town. For two summers a fully registered and insured car covered with sand was driven in and parked. He had a removable panel over the windshield that allowed him to see the road. Just barely.

When he was stopped Jay had to convince the cops that he could see.

Had he not been allowed to continue that would have been the end of it as he exclaimed with emphasis.

Once parked the Sand Car stayed put all summer and drew crowds. It attracted so many gawkers that the town authorities and police concluded that it was a hazard.

He only discovered much later that a tow truck had been called to remove it.

In an interesting development the tow company refused to move a registered and insured motor vehicle with a paid up parking permit. To perform a potentially illegal act might cause the tow company to lose its license.

Of course if it was just a lousy work of art then, by all means, haul the sucker off with all due charges, fines and penalties.

It came down to that age old argument of what is art?

The debate also convinced Jay that he was indeed an artist.

His conceptual works have been examining that conundrum and poking at the scab of conservatism ever since.

It seems that his son is now in law school and may one day do pro bono work for his dad.

Like a funky version of Christo a lot of his energy and resources have gone into legal fees, securing permits, establishing brands, copyrights and corporations.

Which is all well and good but I had the temerity to ask how he earns a living? How does he bring home the bacon as it were?

He just gave me that deadpan, you gottah be kidding, fisheye look punctuated by his familiar soft laugh. This kind of exchange is a running gag between us.

Critics can be pretty thick. Or pretend to be in pursuit of provocative questions and fresh responses.

Talking with Jay is always somewhere between open mike, radical agendas, and serio-comic criticism. Which is total gonzo for saying whattah guy!

Bouncing out of the house like Tommy's silver ball we catapulted into the back yard and its obstacle course of past and present objects d'art.

OMG there in a corner rusting sublimely under its decaying crust of sand was that original assisted readymade that so roiled the up-tight town administrators and steamed up heat.

We speculated on the bidding war over which mega museum would add the Sand Car to its permanent collection. Jay thinks it may go to the Smithsonian. They should be so lucky. For me it belongs in the Whitney or permanently parked at Mass MoCA.

Of course we examined the unique round septic tank which can hold up to six and has been the center of all kinds of events, performances and underground theatre. Sometimes people just  hook up. It is used in a residence program for visiting artists.

On of his favorite games seems to be Truth or Dare. Particularly with gorky, gullible visiting critics.

Well, two can play that game.

Like the out house which was being prepared for the exhibition or the recycled Christmas tree which will sit in a boat in front of the museum. It evokes an ancient Viking ritual. During his annual Rerooting ritual, evoking a Valhalla for the spirit of the lost pines, one is set ablaze at sea.

Much of the work entails off  kilter relics and artifacts. There are many hats for the various roles and incantations. From a  processing plant he collects discarded fish skins. These are then applied to a range of mundane objects investing them with transformative spirit. He showed me a range of these objects from an ersatz fish skin pie to a  pair of women's shoes, a Pilgrim hat, and absurdly his sand encrusted high school jock strap.

If none of this makes sense then the museum's press release that follows may bring you back to earth.

Like a visit to Pee Wee's Playhouse, Jay's version of a conceptual Never Never Land was just fun fun fun; what an absolutely wonderful waste of time, space and sanity!

Provincetown, MA: Provincetown Art Association and Museum (PAAM) is thrilled to kick off the summer season with a survey of over 30 years of work by Provincetown artist Jay Critchley. On view at PAAM May 1-June 21 with a free public reception on Friday, May 8th at 7pm, Jay Critchley, Incorporated, curated by Bailey Bob Bailey, is Critchley's first-ever museum survey.

The public is invited to a free gallery walk-through event called Breakfast with Jay, presented in conjunction with the final remarks of the Appearances: Green Arts Festival, on Sunday, May 3 at 10am and for a Fredi Schiff Levin lecture with Critchley and Bailey on Tuesday, June 9 at 7pm (free for PAAM members or with $10 Museum admission).

Critchley's notoriety is fueled internationally by the alternative and mainstream media with one compelling, visionary proposal and idea after another, relentlessly tackling the big issues of our time, always with a baffling sense of humor, seriousness and timing: from global pathogens to plastics and the car culture, from climate change to corporate domination. What is the American Dream? He asks.

His corporate personas and enterprises have challenged the dominance of corporations in a democratic society. He is founder and President of the NRC, (Nuclear Recycling Consultants,) TACKI (Tampon Applicator Creative Klubs International), Old Glory Condom Corporation (worn with pride country-wide the patriotic condoms imprinted with the American flag), and the IRS (International Re-Rooters Society), with its annual ritual and the burning of a Christmas tree/boat at sunset in Provincetown Harbor.

Critchley's work is exhibited, performed and presented throughout the US, Europe, Columbia, Argentina and Japan. He has won awards from Massachusetts Cultural Council, Boston Society of Architects, Smithsonian-Cooper Hewitt Museum in NYC and an HBO Audience Award at the Provincetown International Film Festival. He has been awarded artist residencies at Williams College, Harvard University, AS220 in Rhode Island, MilePost5 in Portland, Oregon, Harvestworks NYC, Fundacion Valparaiso, Almeria, Spain and CAMAC, Marnay sur-Seine, France.

A Jay Critchley, Incorporated catalog will be published by Provincetown Arts Press in collaboration with the Provincetown Public Library, who will publish it in eBook format. In 2016 the show will travel to Florida Atlantic University Galleries in Boca Raton. Future venues will later be announced.