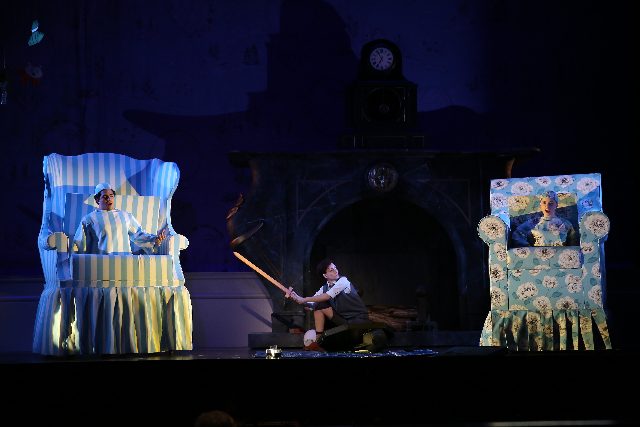 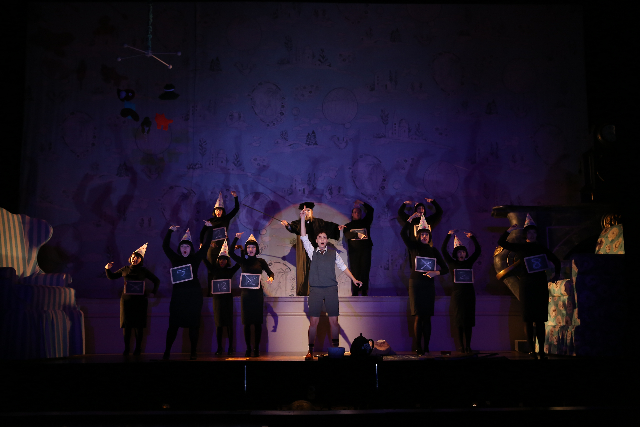 Amy Yarham beats back Math homework via Ravel and Colette. In the garden Act two takes place in a garden where the child seeksreegue and finds only more terrora nd reproah. "Our wounds, our wounds," cry the trees. Child attached by the creatures he wounded. All creatures begin to mate. The garden becomes a tender paradise from which the child is excluded. The animals love each other. "They've forgotten me." Light comes on in house. Moon comes out. Creatures lead the boy to the door, arms outstreched for Mama. 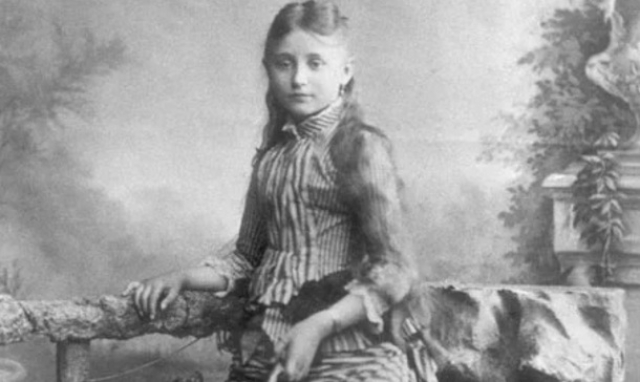 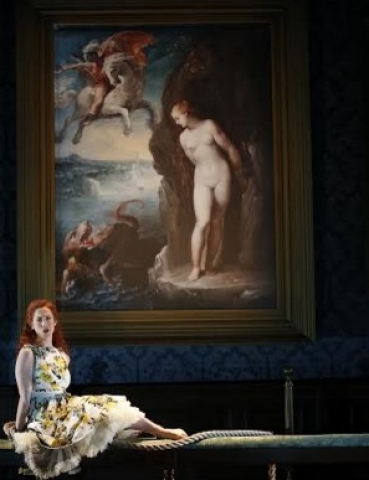 Jana McIntyre, a beautiful performer in every way: her lovely lyric voice, her movements, her expressions. 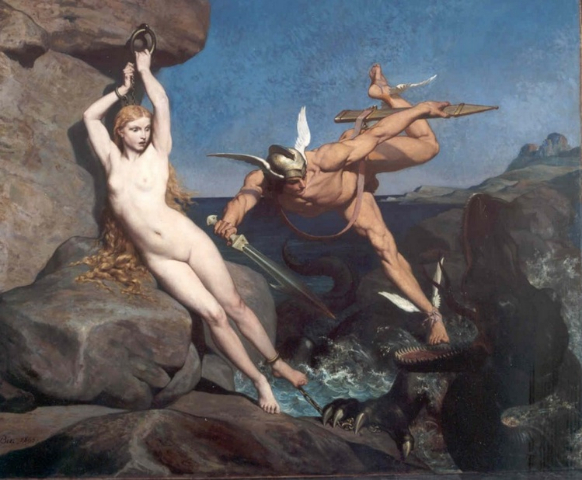 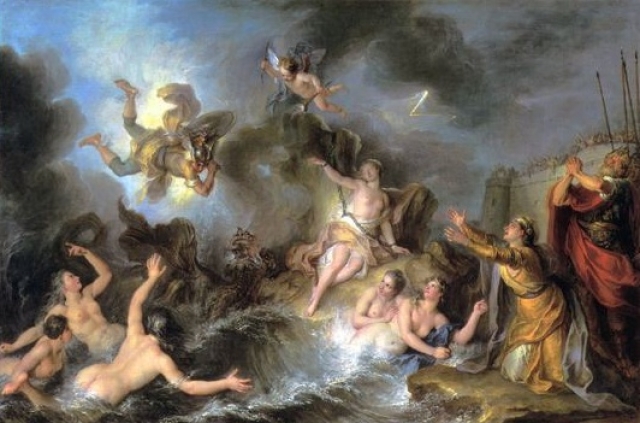 Is Andromede too beautiful for her own good? 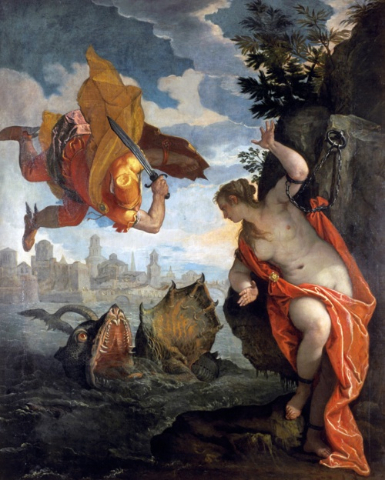 The monster wins the beauty even in death as Ibert tells it.

The consistent level of professionalism in productions of opera at the Manhattan School of Music, located blocks up from the struggling Metropolitan Opera, suggests that the city is an incubator of an art form that has a secure future.

Voices in MSM productions are always first-rate. So too the settings, costumes and orchestra providing context for often enchanting stories. The sounds of French perfume wafted through the John Borden Theater for performances of a seldom heard Jacques Ibert opera and the Ravel/Colette warhorse L’Enfant et Sortilèges. Pierre Vallet, who assisted the New York Philharmonic in an outstanding performance on Honneger's St. Joan, conducted the lovely French sounds and even more Spanish castanets.  He is an expert at bringing forth the best from singers performing in conjunction with the orchestra.

Colette wrote quickly, which was unusual.  With uncensored, dreamlike symbolism of writing and magisterial sureness and economy, Colette dramatizes the crisis of her protagonist.  He has killed a mother bat, and her children have no one to feed him.   Although animals complain that he has a knife and a stick and a cage and a net, when he dresses a squirrel's wound, he is forgiven.

L’Enfant et Sortilèges was staged to perfection. Sitting next to Colette at its premier in Monte Carlo, Ravel remarked, "Isn’t this amusing?" Colette could not answer because she had a lump of tears in her throat.

In her only opera libretto, Colette incorporated the entire range of human emotions and they were in turn evoked by James Robinson, the director of this opera mounting.  Mysteries of nature, animals, childhood and adolescence attracted both Ravel and Colette, who brought a modern sensibility to the subjects.  So does this production.

In the trouser role of a young boy, who tortures the animals in his home, including a caged squirrel, Amy Yarham is a bundle of childhood torments and joys. Childlike and boyish, Yarham has a lovely light mezzo soprano, full of yearning for Maman and revenge for her absence. She could be the young Colette whose Maman daringly wore trousers which the great writer would later don.

Squirrel in cage, kettle humming, cat purring, the child is wild with frustration at the mother. Colette's maman is a figure of myth.  "You sought me in the perfume of the white lily.  You sought me, little lover,and I was your beloved."

The first Act exposes the torments, homework prompting rebellion against Maman.  In the second, the boy makes a dream-filled peace with a tender, sexualized animal kingdom.  Stand out cameos were Yujia Chen as Fire in sparkling red sequins, igniting the stage, Rachel Stewart as the White Cat and  Michael Gracco as the clock that can't stop striking.  Yet it never knows what time it is.  In fact, we are outside time.

Noragh Devlin is a matronly yet glamorous Maman as she enters the living room where two outsized chairs indicate the young boy's perspective.  Maman is on her way out for the evening. Her voice is suitably firm as it spreads out over her farewell.  Maman's absence prompts fury and then a joyful embrace of nature, including maternal nature.

Colette had a tortured relationship with her own mother, and wrote a wonderful series of books on Claudine, which appear to be the inspiration for this libretto. which is a perfectly balanced, and her only effort in opera.

Both French operas are mythic enchantments. Ibert revisited the Persée and Andromède myth with a twist. The monster who guards Andromède is not evil and frightening, but the Beast of fairly tales, who loved the beautiful girl.   In this production, he teaches Andromède chess and literature.

Jana McIntyre consumes the stage as Andromède. Her lovely voice, with a slight French accent in the vibratos, reaches high and low comfortably. The challenges of the role are not perceptible because McIntyre has thoroughly mastered difficulties and made them pleasures.

Youmg Kwang Yon as the monster who educates the delicious young woman abandoned on a rock has a full-throated baritone which seduces Andromède and us. Nino, the librettist took another version of the story, making Persée into Gaston, a preening fool. When Persée loses Andromède, he says her looks are fading. They aren’t.

The John Borden theater seats 846 and seems a perfect size for opera’s current audiences, who want an up close experience with wonderful acoustics. Noticeably, the audience of all ages dresses for the evening, perhaps old-fashioned, but a suitable tribute to the effort that we are all privileged to watch on stage.