The Outgoing Tide by Bruce Graham 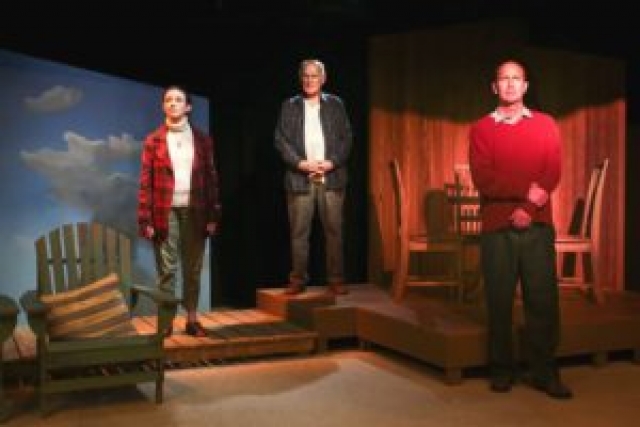 The younger man is Scott Smith, the older man is Michael Fairman, and the woman is Judith Chapman. The photographer Clark Duggar. 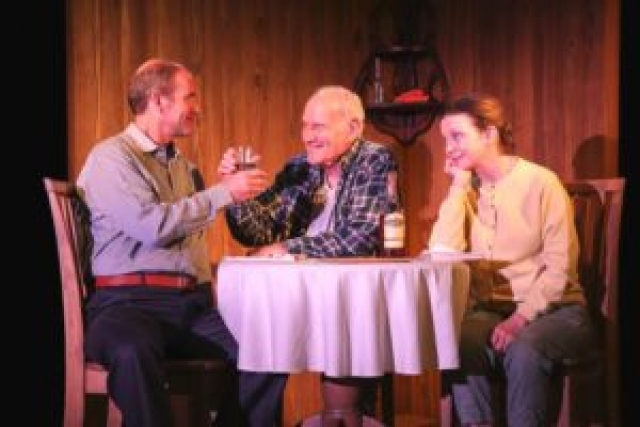 Life and death are a fact of life on this planet. We must all confront the inevitable. No one ever left this planet alive. Death and rebirth are tenets of some religions and the tenets of all religions are acts of faith.

Humankind is at a point today where eons of traditions are being revisited when it comes to medical assisted suicide, or just plain suicide by individuals as a way to relieve excruciating pain and long term suffering when terminal diseases, like cancer, are present and in situations where Alzheimer Disease is a living death.

The concept of allowing each individual to make medical decisions for themselves is new, complicated, and has been challenged legally in this country through the ballot box and the referendum process. It was only a matter of time before playwrights, writers, medical professionals and the legal profession began to weigh in on this highly-charged and emotional subject matter. Oregon, for example, has passed a law allowing assisted suicide. California is contemplating passing a similar law with other states now exploring their options.

Which brings us to “The Outgoing Tide” a powerful and compelling Dezart Performs theatrical company, drama now performing at the Pearl McManus Stage of the Palm Springs Women’s Club.

“The Outgoing Tide”, insightfully written by Bruce Graham and intelligently directed by Dezart Performs co-founder Michael Shaw, is blessed with a cast of three seasoned professional actors who have graced your movie and television screens over the years and who know their way around a poignant, relevant, and deeply emotional play when they find themselves in one.

The story has three sharply drawn characters who bring to life the saga of the Concannon family and their lives on Chesapeake Bay during one Autumn.

Gunner (a sensational Michael Fairman), a retired small trucking company owner is painfully aware that he is suffering from Alzheimer’s disease. Peg (national acting treasure Judith Chapman), and their son Jack (Scott Smith), have been dreading the day when end-of-life plans and decisions have to be made concerning Gunner. How does a loving and caring wife make decisions that will affect her proud, stubborn, blue-collar kind of guy who always has been a take charge husband and a vigorous, robust father figure to Jack?

Gunner is determined not to allow Peg to put him in one of the retirement homes that Peg and Gunner having been visiting of late. He’s not going to be one of those vacant-staring old men who don’t recognize their own children when they show up to visit. Jack is in the process of getting a divorce and is of little support to Peg who has been bearing the brunt of Gunner’s frustrations concerning his mental deterioration. He roars like a wounded lion when his frustrations becomes too great to bear.

As the play opens Gunner and Jack have been talking together about fishing, the beauty of the Bay, and when Peg comes to call them in for dinner, Gunner says to Peg “Who is that guy?” Whenever Peg or Gunner talk to Jack they both say “don’t tell your father or don’t tell your mother. Everyone knows what the end game is, it’s that nobody wants to discuss it openly, everybody that is, except Gunner.

Gunner, in his usual style takes control of the inevitable and concocts a scheme to spare his family the trauma of the-end-of-life decisions and at the same time preserve their monetary future. How Gunner accomplishes it and the ensuing discussions between this ensemble trio of gifted actors is the meat of this splendidly performed play.

The Concannon family story is interspersed with a series of time shift flashbacks, then forward to the present. These transitions, which are important to the story, are nicely handled by director Shaw. His seamless directorial touches and fingerprints are all over this excellent production.

The beauty and power of this production lies in the sharp, incisive, dialogue of playwright Graham and the potent performances of Michael Fairman, Judith Chapman, and Scott Smith. When quality writing is placed in the hands of gifted and experienced actors, the results are elevated and sublime.

The technical credits and the creative team led by director Shaw and Producer Clark Duggar, features a beach front home set design that is superbly lighted by Phil Murphy, and features the work of scenic artist Walter Lab. The production is in the capable Stage Manager hands of Blanche Mickelson.

“The Outgoing Tide” performs at the Pearl McManus theatre and runs through May 8, 2016. For reservations and ticket information, call the box office at 760-322-0179.