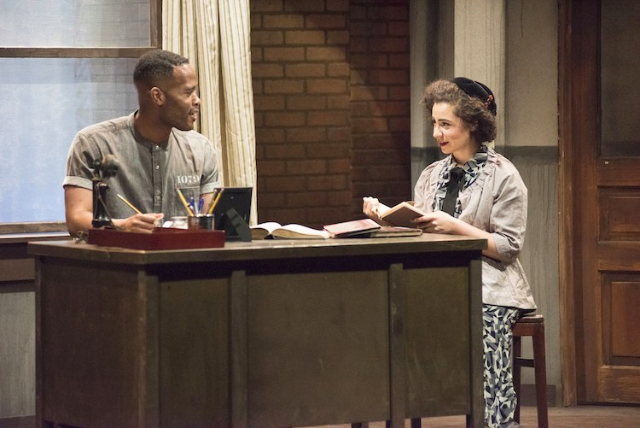 Not About Nightingales, an early Tennessee Williams script, is a Depression-era tragedy with many elements that foretell Williams’ genius as a playwright. Its setting—a large prison where the prisoners revolt against their horrific treatment—is unusual for Williams, but the dialogue occasionally reflects his poetic and symbolic language.

Raven Theatre’s new production of Not About Nightingales is powerfully directed by artistic director Michael Menendian. The play is a more than a bit melodramatic, but the strong performances and Breon Arzell’s choreography, especially of the prisoners’ marches, lift the play above the mundane.

Brandon Greenhouse plays a soulful and tormented Jim Allison, a prisoner turned into a trustee with office responsibilities by evil warden Boss Whalen (Chuck Spencer), whose bad habits include alcohol and lechery. To earn his status, however, Jim is forced to inform on his fellow prisoners and becomes known as Canary Jim.

Jim, who has been in prison for 10 years, hopes for parole. He uses his free office time reading and building his vocabulary. One of his duties is editing the prison newsletter, the Archaeopteryx, and he yearns to be a writer. In one scene, Jim is reading Keats’ poetry, but throws it down in disgust when he reads “Ode to a Nightingale.” “It’s sissy stuff,” he says. “Don’t these literary punks know there’s something more important to write about?” When he gets out, Jim says, he wants to write, “but not about nightingales.”

Eva Grant (Sophia Menendian) comes to the prison, in desperate need of a job, and is hired by Boss Whalen, mostly because of her feminine virtues. She and Jim become friends, allies and lovers.

The prison scenes where tough Butch O’Fallon (Joshua J. Volkers) and his fellow inmates complain about the monotonous, often poisonous, food are punctuated by forced marches—with body percussion—around the prison to their cellblock. Later, the prisoners go on a hunger strike and Boss Whelan, eager to avoid a public scandal, sentences them all to the dreaded Klondike, where the temperature can be raised to deadly levels.

Ultimately, the Lorelei lures Jim to take his future into his own hands.

The cast is uniformly solid, with Luke Daigle, Raphael Diaz, Rudy Galvan and Matthew Garry playing the prisoners in Butch’s cellblock. Jon Beal is effective as Schultz, one of the brutal guards.

Ray Toler’s scenic design uses Raven’s wide stage effectively, with separate areas set off for the cellblock and the office and flexible spaces used for the prison dining hall and other gathering places.

Even though Not About Nightingales was considered a lost work, it helped Williams get started on his illustrious playwriting career. The play was one of a batch of plays that Williams sent to a Group Theatre competition in December 1938. The Group Theatre, an innovative and influential theater company, awarded Williams $100 and connected him with Audrey Wood, who became his agent. John Lahr tells this story in his fine 2014 biography, Tennessee Williams: Mad Pilgrimage of the Flesh. Nightingales was not staged until 1998, after Vanessa Redgrave made it a personal mission to retrieve Williams’ work.

Not About Nightingales continues at Raven Theatre, 6157 N. Clark St., through June 4. Performances are Thursday-Sunday and tickets can be bought for $43-46 online or by calling 773-338-2177. Some discounts are available.