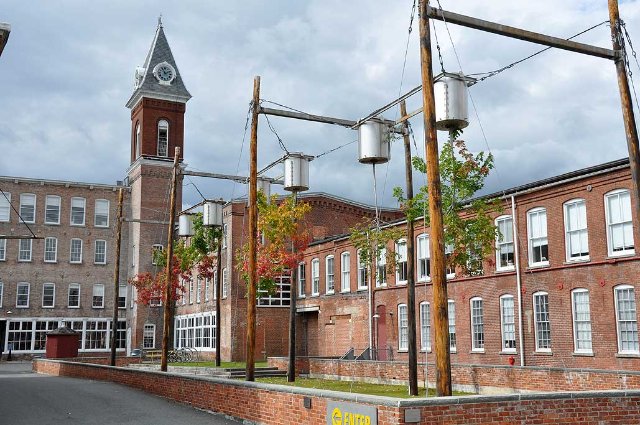 In the band's only North American appearance during Summer 2019, The Pretenders will present a benefit concert at MASS MoCA on July 26, with proceeds to underwrite new work by emerging and established musicians. But long before Chrissie Hynde and The Pretenders ignite the stage, a one-of-a-kind birthday bash — with appearances by Annie Lennox, Tank and the Bangas, and you — launches MASS MoCA into a summer season flooded with new art, live music, dance, film, and more. Art, music, and comedy collide for the return of Wilco’s sixth Solid Sound Festival; the newly crowned queen of indie-pop, Maggie Rogers, brings her sold-out world tour to town; Bang on a Can reimagines its mid-summer museum takeover as one LOUD Weekend (three days and more than 30 concerts); and MASS MoCA’s annual FreshGrass Festival highlights the best in roots music. New art fills teeming galleries, with solo exhibitions by musician and activist Annie Lennox, filmmaker and artist Cauleen Smith, and artist and dual citizen ERRE, and Still I Rise, on view in Kidspace beginning this June features stunning portraits of women of color. Mark your calendars for June 15 when MASS MoCA’s new summer hours begin. The museum will be open every day, 10am-6pm, with late hours some nights, through October 14.

MASS MoCA Turns 20
On May 25, come for MASS MoCA’s birthday blowout that spreads across the museum campus to encompass new exhibitions, art-infused versions of your favorite games, live music by performers from both near and far, great food, and a world of fun. The day’s events kick off with An Afternoon of Conversation & Song with Annie Lennox at 4pm, a rare solo-acoustic performance to benefit the Annie Lennox Foundation (as well as MASS MoCA’s Fund for New Music). A rollicking Block Party brings the festivities into our front courtyard from 5:30 to 8:30pm filling it with games, food, and merriment, while an Opening Reception from 5:30 to 7pm celebrates four new exhibitions, including Annie Lennox: ‘Now I Let You Go…’, Cauleen Smith: We Already Have What We Need, Suffering from Realness, and Joe Manning: Looking at North Adams — both events are free for all. One of the finest party bands around, Tank and the Bangas cap things off that night with a concert and dance party starting at 8:30pm. “Unpredictable, theatrical and full of funk, soul, hip-hop, jazz and spoken word” (Okayplayer), this New Orleans crew is sure to keep things bumping.

In the galleries
In ‘Now I Let You Go…’ legendary musician, producer, and artist Annie Lennox releases a collection of some of her most cherished “things” — (name tags, her children’s shoes, her mother’s spectacles, her piano) into a mound of earth, relating their stories and meaning. Inside an adjacent gallery, a veritable ‘Hall of Fame’ shines with gold and platinum discs, juxtaposing the glittering prizes of her public persona with more intimate aspects of her most personal self. The exhibition is on view now, with an opening reception to be held May 25.

In her ambitious exhibition, We Already Have What We Need, artist Cauleen Smith transports us to a realm of speculation and imagination with her colorful, light-infused video installations. Conjuring sci-fi-inspired visions of utopia, with a concern for our planet and its people, Smith suggests, as does her show title, that “we already have what we need” to make the world we want. The exhibition is on view beginning May 25, with an opening reception at 4pm.

Living between Tijuana and San Diego, the artist known as ERRE has been making work about the slippery character of identity and the U.S./Mexico border for two decades. On view beginning August 3, with a celebration of the artist this fall, ERRE’s first solo exhibition on the East Coast Them and Us / Ellos y Nosotros looks toward both countries he calls home with a loving but critical eye while emphasizing their interdependence.

This summer also brings two new exhibitions with music as inspiration and subject. RnR v1.0 is the first in a series of exhibitions drawing from one of the most comprehensive private collections of rock ‘n’ roll photography. Allovers — an installation by musician/sound artist Ryan Olson and producer/sound engineer Seth Rosetter — converts MASS MoCA's lobby and basement into a musical instrument. RnR v1.0 and Allovers are on view beginning June 28.

Festivals
Wilco’s Solid Sound Festival returns June 28–30, featuring Wilco, the band members’ side projects, and a lineup curated by the band — including Courtney Barnett, Tortoise, The Feelies, Jonathan Richman, Cate Le Bon, John Hodgman’s Comedy Cabaret, the return of Fishing, and more. Expect a record number of visitors for the festival, which takes over the MASS MoCA campus and much of our home city of North Adams for the weekend.

This year Bang on a Can reimagines its 18-year mid-summer museum takeover. Join us for LOUD Weekend on August 2-4 — three days of expansive, electrifying music across the museum campus — including more than 30 back-to-back concerts including Sun Ra Arkestra, Ben Frost, Philip Glass’ live score to Dracula, Brian Eno’s Discreet Music, the Bang on a Can All-Stars, and much more. And don't miss annual favorites, including Latin night, a lake concert, gallery concerts at 1:30 + 4:30pm most days, and more,

The FreshGrass Festival, MASS MoCA’s annual festival of bluegrass and roots music, takes place on September 20-22 with headliners Greensky Bluegrass, Calexico and Iron & Wine, Andrew Bird, Mavis Staples, and more — with big news still to come. Over 50 bands in all.

Concerts
One of the finest party bands on the planet, Tank and the Bangas, keeps our 20th birthday celebration going all night on May 25. Bombino’s guitar magic conjures the North African desert blues of the Sahara on June 15. In the band's only North American appearance during Summer 2019, The Pretenders will present a benefit concert at MASS MoCA on July 26, with proceeds to underwrite new work by emerging and established musicians.  In association with this special concert, Chrissie Hynde will appear for a special event at the museum on July 27. On July 30, Maggie Rogers steers her sold-out world tour to the Berkshires, delivering a night of electrifying indie-pop bliss under the stars. Legendary artist and musician Laurie Anderson presents Lou Reed Drones with Reed’s longtime guitar tech Stewart Hurwood on August 10, a drone-based sonic experience utilizing guitars from the late musician’s collection. Then on August 31, the experimental hip-hop and electronic artist, label founder, filmmaker, and all around wizard of the LA underground beat scene Flying Lotus soars into town as part of a limited tour, with a video wall, 3-D glasses for all, and a head full of crazy music just waiting to come out.

More Live Music
Legendary music producer John Simon — responsible for everything from The Band’s Music from Big Pink to Janis Joplin’s Cheap Thrills — is in North Adams on July 6 playing songs and telling stories from his book Truth, Lies, and Hearsay: A Memoir of a Musical Life in and out of Rock and Roll. Multi-instrumentalist, singer-songwriter, and fierce frontwoman Caroline Rose turns heads on July 20 with her darkly funny, post-punk pop. On July 27 Nashville-based Adia Victoria “make[s] the blues dangerous again” (The New York Times) with her contemporary take on a classic Southern sound. More dynamic beats come your way on August 17 courtesy of Jupiter & Okwess, which mixes traditional Congolese rhythms with Western rock and pop styles for pure dance-floor bliss. Local favorite and now Grammy-celebrated Roomful of Teeth kicks off a second decade’s reimagining of the potentials of the human voice with its performance on August 23, presenting new work commissioned as part of the American Composers Forum's "ACF Connect" program, alongside a retrospective of Teeth's first ten years. On August 24 deep funk tunes and bass-heavy sousaphone blasts mix with the gritty warmth of singer J’Wan Boudreaux’s voice to create an irresistible New Orleans brass band-meets-Mardi Gras Indian sound — the Grammy-nominated Cha Wa radiates the fiery energy of the best features of Big Easy street culture.

Film
Together with friends at the Williams College Museum of Art, on July 13 we screen Matthew Barney’s feature-length film Redoubt. Set in Idaho’s Sawtooth Mountain range, the film layers classical, cosmological, and American myths about humanity’s place in the natural world, adapting the myth of Diana, goddess of the hunt, and Actaeon, a hunter who trespasses on her and is punished — a story of guns, hunting, and wolves in the wild.  Stay for a discussion with the artist and WCMA Director Pam Franks.

Season at a glance, by date: