Mahagonny at the Manhattan School of Music

Aaron Short and Rachelle Pike Whet Appetite for the Future 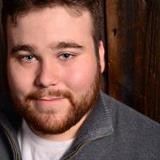 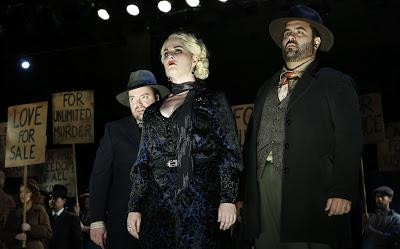 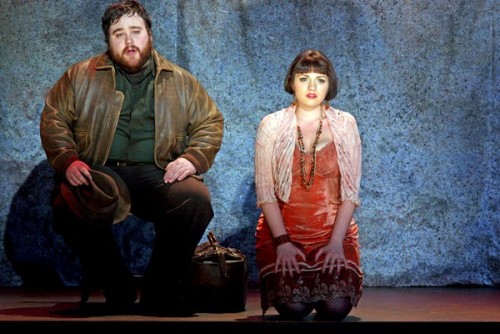 An iconic broken down truck is sitting on stage, so we know three escaping criminals will soon build a new state, Mahagonny.  Behind a hospital-like dividing curtain, a flophouse will cast off silhouettes of sex acts.  Mahagonny will be a new Sodom & Gomorrah, or maybe even New York in the Age of the Derivative.

In this superb production of Mahagonny at the Manhattan School of Music, the entire auditorium is used for the opera. Processions of people coming into the New City march down the aisles. At the end, the cast surrounds the audience, freezing us in their location, showing us we are trapped where everything is permitted. First comes your belly, then the whoring act, and don't forget there's boxing and guzzling per contract. And best of all, one precept's true, whatever you wish, that you can do. "The hurricane is bad. Typhoons are worse, but worse of all is man."

The simple sets are terrific, three tattered tires on which the tablecloth flag of the city beckons or warns passing ships.  A neon quarter moon, a lounge chair electrified, and crude signs which herald the city’s important principles: Drink, gamble, fornicate, cheat, lie.

In this collaboration of Kurt Weill and Bertold Brecht, jazz is the intrinsic spirit in which the music moves forward. It conforms to Brecht’s often tough and jagged words. Kynan Johns conducted the beautifully wrought score with a feeling for both the folk jazz and for Brecht’s language.

The cast throughout was good, but two young singers stood out. One was Aaron Short singing Jimmy.  Tireless, his final aria, a prayerful wish that the night will not end, was as full-voiced, finely shaped and perfectly edged as everything else he sang during the performance. It is rumored that he already has a contract with the Metropolitan Opera. Wagner may well be in his future.

In recent memory, only Eva Poodles has the kind of chest voice on display in Rachelle Pike as Leocadia. Her booming and yet nuanced sound is so unusual that is impossible to take your ears off her. Hard to imagine that she has missed the radar of the Metropolitan Opera’s assistant manager artistic, a fellow Kiwi.

The production, directed by Dona D. Vaughn, who heads up the school’s opera department, was amazingly good. If the second part of the program, Acts II and III aptly combined, was static, the voices of the principals more than made up for the lack of staged drama. The first Act compelled at every moment. The chorus was strong and the music of great moment and sometimes beauty, for instance in Jimmy and Jenny's love song.

If the anti-opera did not feel as cynical and sneering as it might have, it was a harsh picture of a piece of the world which seems to have been around forever, packaged in wonderful music and wrenching song.

This production was a triumph at New York’s leading conservatory for opera.