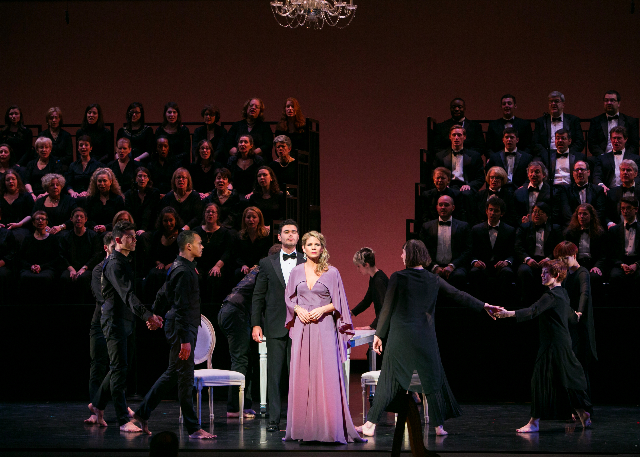 Kelli O'Hara as Dido with Elliot Madore, her Aeneas. The Collegiate Chorale and Doug Varone dancers complete the staging of what may be the first opera. 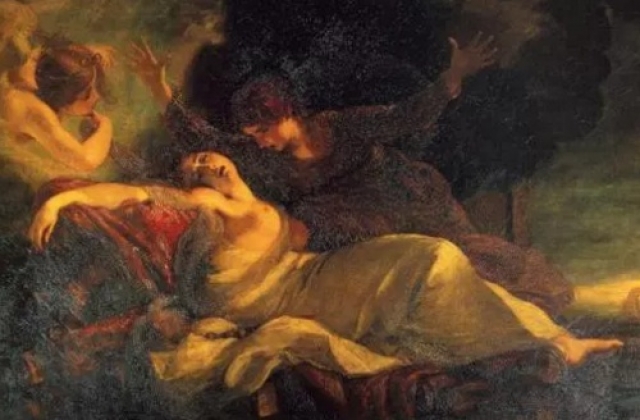 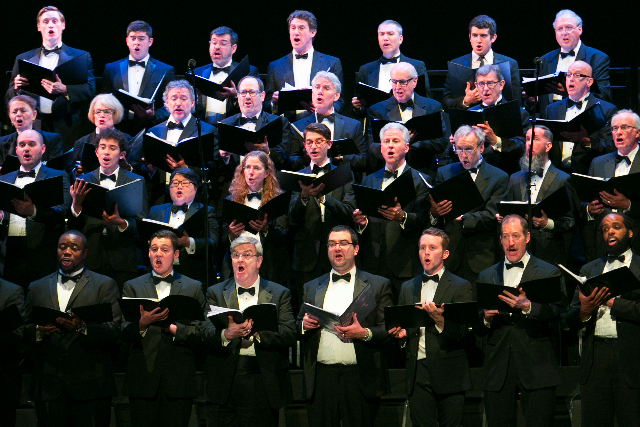 The Collegiate Chorale, a distinguished group of singers. 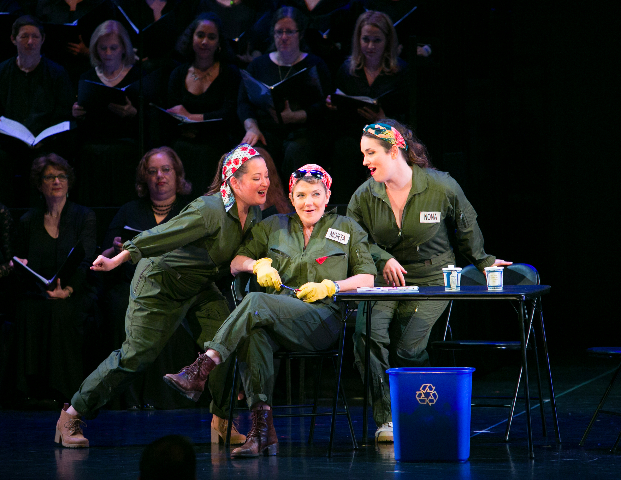 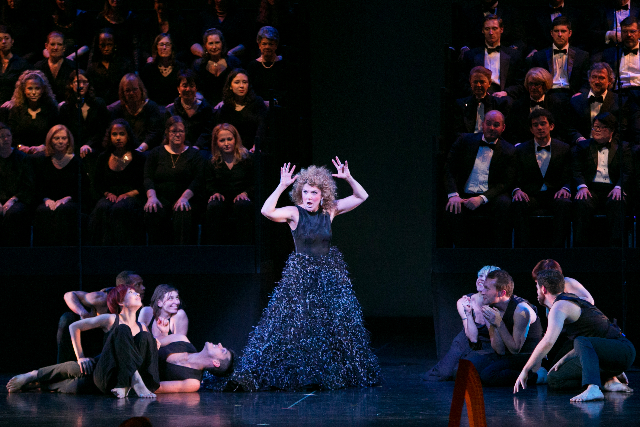 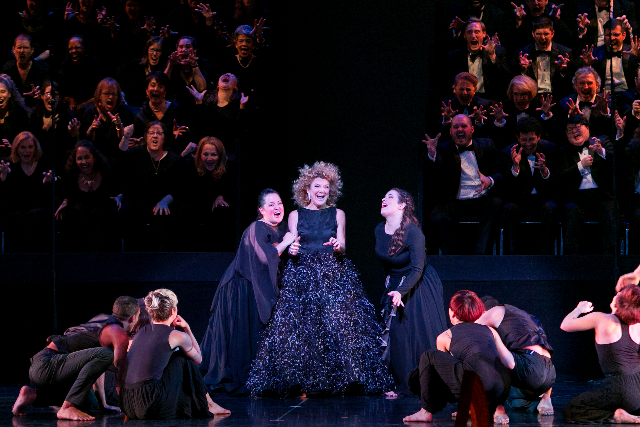 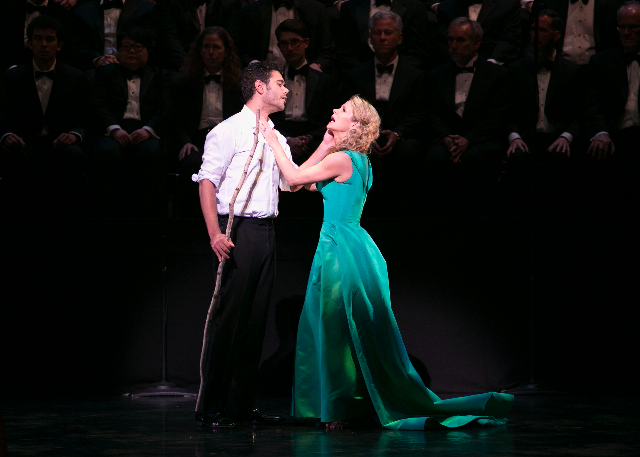 Making a case for duty, the founding of Rome 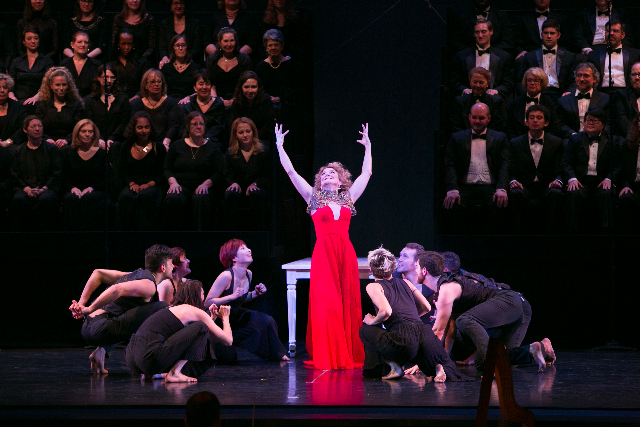 The Sorceress won't go away. We don't want her to. Doug Varone dances surround her. 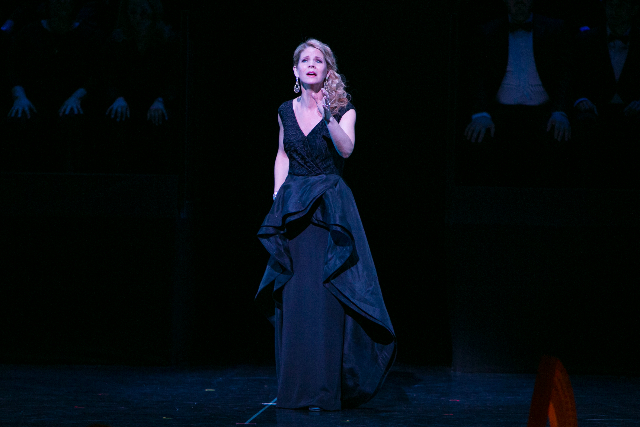 O'Hara gives a gorgeous performance of Dido's Lament, "Where e’er you walk". 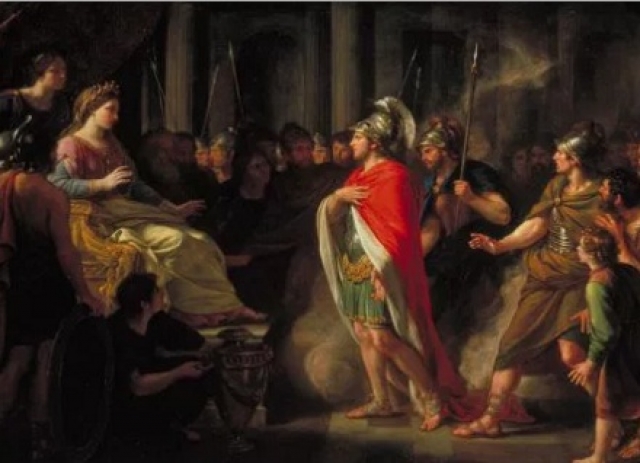 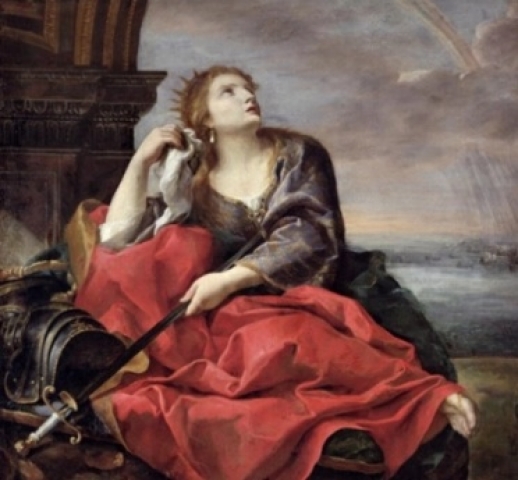 Henry Purcell's music is perfectly beautiful and a bit dull.  Yet his important Dido and Aeneas was one of the first operas ever composed.

MasterVoices, the new incarnation of the Collegiate Chorale, came up with many innovative approaches and a stunning cast.  The chorus is impeccable and even humorous, as participants in a camp opening prologue created by Michael John La Chiusa.  The Daughters of Necessity makes up for the original prologue which has not to date been found.

Kelli O'Hara is an artist who crosses over easily from such roles as Anna in the King and I to high operatic art.  Her soprano is clear and tinged with just the right vibrato.  As Dido, she is both a Queen and a woman passionately in love.  Any one who has studied Latin in high school knows that Aeneas was destined to found Rome and leave his love behind to immolate herself.  The spurned-for-duty love theme of Virgil and subsequently Chaucer and Christopher Marlowe was not in the original by Timaeus of Taormina where Dido throws herself on a pyre to avoid betraying her dead husband.

The outcome in Purcell/Tate reflects Virgil, but O'Hara has a regal carriage which suggests a great sacrifice.  Even knowing the outcome, the passion of the two lovers produced duets that entrance.  O'Hara is joined by Elliot Madore, MasterVoice's Faith Geier artist and deservedly so. Madore has an edged tenor that brought textural contrast and drama to his solos and enriched duets.

Anna Christy adds a touch of spice to any production, and here she camps up the prologue and provides appropriate support as a member of the court.  Sarah Mesko completes a trio.

Victoria Clark is larger than life as the Sorceress who would ruin the Queen's life.  With arms flung about her head and hair wildly flying, she acts as well as she sings, enlivening the story as it comes to its predicted end.

To keep the stage active, Doug Varone choreographed dancers who both mimicked and extended the story.  Mark Morris famously created a ballet around the story.  Varone captures Morris' joy in sexual activity, his mischief and the story's sadness. Morris himself at one time portrayed Dido, but Varone uses both male and female dancers to great effect.

Ted Sperling is music director of the group.  He leads the orchestra in a full expression of the score.  O'Hara's rendering of Dido's Lament, a highlight of the score, is wrenching.  Sperling shows how sensitive to a singer's needs he can be.

The MasterVoices chorus is superb.  In this Dido and Aeneas, they become a character, interacting with the principals in both prologue and the main event.

How delightful to hear lovely music in the hands of such talent.  The newly configured organization plans to commission original work, offer premiers, always featuring the heart of their mission, its masterful chorus.