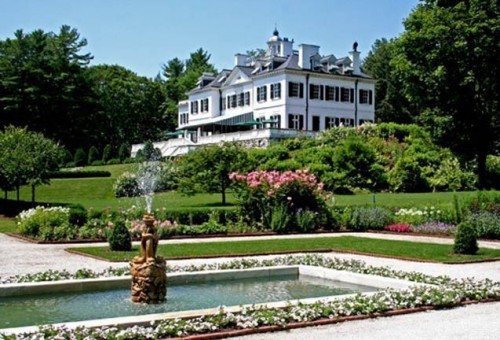 The Mount will again offer a varied program this season.

Pulitzer Prize-winning biographer Tom Reiss, Shakespeare & Company, SculptureNow, BIFF and Lift E'vry Voice have something in common: they are all part of The Mount's 2013 summer season.

"This season's line-up is outstanding," said Susan Wissler, executive director of The Mount. "I honestly can't say what we are most excited about because it is all stellar. To be able to offer a season that includes Shakespeare's return to The Mount, an outdoor sculpture exhibition with SculptureNow, and a full schedule of lectures, music, and events is quite an accomplishment-there is something happening at The Mount almost every day in July and August."

In addition to a full schedule of special events and exhibitions, The Mount will continue to offer summer audiences traditional seasonal programs that include the popular Music After Hours series, Wharton on Wednesdays, and Community Day. Opening day is Saturday, May 4th.

Highlights of the 2013 season include:

The Mount opens for the 2013 season on Saturday, May 4th. For additional information, including our full Calendar of Events, please visit EdithWharton.org.

The Mount, in partnership with SculptureNow, is pleased to present an exhibition of large-scale outdoor sculptures featuring the work of 24 nationally acclaimed artists, including George Rickey, Jonathan Prince, Richard Erdman, and Tim Prentice. View The Mount's landscape through a fresh lens!

McMillian's Gilded Age presents a modern Edith Wharton heroine-dramatically beautiful, socially prominent, and just a bit unconventional-whose return to the hothouse of Cleveland society reveals the vulnerabilities of a woman struggling to reconcile her desire for independence and her need for love. Book signing to follow.

Join Wharton scholar and author Irene Goldman-Price, novelist Jennie Fields, and 2012 Costa First Novel Award winner Francesca Segal as theydiscuss their muse and share their thoughts on why Edith Wharton is timeless. The session will be moderated by Alan Price, author of The End of the Age of Innocence.

See what the buzz is about! PERIODS. comedy film collaborative has built an avid online following with quirky reinterpretations of historical events and classical literature. Be among the first to see their feature-length film that chronicles the human experience in a whole new fashion. Talk-back following the screening with PERIODS. creators Victor Quinaz and Anna Martemucci.

The Hermit in the Garden: From Imperial Rome to Ornamental Gnome

Historian Gordon Campbell tells the engagingly and sometimes eccentric tale of the 18th century hermit-in-the-garden craze and how hermits and hermitages live on in the art, literature, and drama of our own day. Book signing to follow.

Don't Stress Out! Tips for Gardeners

Want to improve your garden andreduce gardening stress? Then join us for a morning with garden expert Kerry Mendez as she presents: "Gold Medal Perennials, Flowering Shrubs, and Annuals for Gardens in the Northeast" and "Simplifying Gardens to Fit Changing Lifestyles."Includes continental breakfast and garden tour.

Who's Afraid of James Joyce?

Struttin' with Some Barbecue: Lift Ev'ry Voice and The Mount Celebrate the Community

Come and enjoy an evening of good food and great music, featuring trombone virtuoso Craig Harris and friends. Bring your family and friends as we celebrate the cultural vitality of the Berkshires. Sponsored by Lift Ev'ry Voice Festival and The Mount. Food and beverages available for purchase.

Summer visitors have enjoyed the Berkshires' natural and cultural treasures for over a century. Architectural historian Richard Guy Wilson will trace the origins of this tradition, following Wharton from the beaches of Newport to the Berkshire Hills.

THEATER AT THE MOUNT:

Shakespeare & Company returns to The Mount! Join us for a special month-long engagement of the Northeast Regional Tour of A Midsummer Night's Dream. Bring your own seating and blanket for this 90-minute performance of Shakespeare's beloved comedy performed outdoors in the Dell. For more information and tickets, visit: www.shakespeare.org.

The Wharton Salon is celebrating its fifth anniversary at The Mount with two lighthearted, one-act short stories by Edith Wharton: The Quicksand and The Looking Glass. By popular demand, tea and cookies will be served at intermission! For tickets and information visit: www.whartonsalon.org or call 1-800-838-3006.

Award-winning author Megan Marshall opens our series with a talk about the trailblazing life of a great American heroine, Margaret Fuller. Fuller-first female war correspondent, Thoreau's editor, and Emerson's close friend -forever changed women's sense of how they could think and live.

Marmee & Louisa: The Untold Story of Louisa May Alcott and Her Mother

Eve LaPlante, award-winning author and cousin of Louisa May Alcott, draws from newly discovered papers in the family attic to tell the story of Louisa's actual "Marmee," Abigail May Alcott. Abigail, the intellectual and emotional center of her daughter's world, pushed Louisa to excel and to pursue her dreams in a male-dominated world.

The Black Count: Glory, Revolution, Betrayal, and the Real Count of Monte Cristo

Hear the extraordinary story of the real Count of Monte Cristo as Pulitzer Prize-winning biographer Tom Reiss brings to life General Alex Dumas, a forgotten hero. Father of the author Alexandre Dumas and the son of a black slave, General Dumas inspired such classics as The Count of Monte Cristo and The Three Musketeers. This lecture is presented as part of Lift Ev'ry Voice.

Master of the Mountain: Thomas Jefferson and His Slaves

Prominent historian Henry Wiencek shares his thorough examination of the dark side of this founding father. Wiencek's Jefferson is first and foremost a plantation owner-committed to slavery because he was utterly dependent on it for all his wealth, status, and power.

The Voice is All: Rethinking Kerouac

In her biography of Beat poet Jack Kerouac, Johnson sheds new light on his journey from boyhood to cultural icon. Drawing from their love affair as well as from Kerouac's letters and diaries, Johnson peels away the layers of the legend to reveal the real man beneath.

The Richest Woman in America: Hetty Green in the Gilded Age

Renowned author Janet Wallach explores the life of Hetty Green, America's first female tycoon. Green, considered an eccentric by her friends and "The Witch of Wall Street" by her enemies, bucked conventional wisdom and amassed a fortune equal to more than two billion dollars today.

American Isis: The Life and Art of Sylvia Plath

Carl Rollyson is the first Plath biographer to draw from the Ted Hughes archives, which include letters between Plath and Hughes as well as a host of unpublished papers. Rollyson paints a new picture of Plath as a powerful force that embraced high and low culture to establish herself in the literary firmament.Show moreShow less

As the first astronauts were launched into space, America focused on their young wives, transforming them from military spouses into instant celebrities. New York Times writer Lily Koppel, author of the bestseller The Red Leather Diary, follows the lives of these brave women, chronicling their friendships which spanned over fifty years.

Bring the family and spend the day at The Mount! Tour the house, explore the gardens and trails, and enjoy the surroundings. Scavenger hunts, story times, and other activities throughout the day.

It starts with creaking floors, slamming doors, and ghostly footsteps. Come take a 90-minute guided tour of the most haunted parts of the estate. This spooky tour is not recommended for children under 12.

Enjoy summer afternoons on the Terrace while listening to Wharton's short stories read by professional actors. This year's short story series will be book-ended with readings from the novel The Custom of the Country in celebration of its 100th anniversary.

Join us for a rousing blend of traditional and modern music with influences from the Americas and beyond, performed by the region's best musicians. Relax on the terrace with a glass of wine while savoring the sounds and the view.