Shines at the Purple Room in Palm Springs 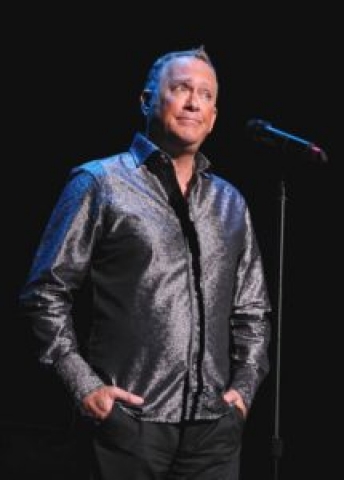 Michael Holmes’ Purple Room cabaret/nightclub located at Club Trinidad in Palm Springs is the place to catch rising stars and to enjoy terrific local performers doing their ‘thing’. Holmes is a performer/producer is his own right. Every Sunday Michael Holmes experiences a theatrical metamorphosis becoming the legendary star persona of Judy Garland in his own production “The Judy Show”.

But last Friday, he presented local cabaret star Jerome Elliott to the audiences of the Purple Room for an evening of songs, memories and anecdotes about the vicissitudes of a life in show business, complete with all the highs and lows which everyone can relate to on that bumpy road of life that we all travel.

“Crawling Back to Broadway”, is a nicely written, well-crafted revue, of songs and patter, by Elliott, and a musical set list that includes inter-action with the audience, thanks to the cool and easy style of musical director Charlie Creasy. The synergy between Elliott and Creasy is the result of eight years of performing together. And, it shows when the musical numbers seamlessly flow from one emotion to another as each number by Elliott hits the soft and poignant spots of the audience.

One of joys of seeing this live cabaret and a musical revue, is how quickly Elliott engages and establishes a rapport with his audience, many of whom have been following his career in the Coachella Valley for several years. As a side bar note: Elliott is also an actor who has appeared in drama and comedy productions throughout the Valley. I have reviewed him in the past in drama and in comedy roles, but I feel his cabaret and musical skills are still very solid and so it becomes difficult to pigeon-hole him in just one performing genre. He’s a multi-talented performer.

The music ‘set’ numbers arranged and selected by Creasy and Elliott, slip easily and nicely into Elliott’s performing style. The show is comprised of original music and lyrics by some of the finest artists of pop music, including Broadway: “Birthday”, by Lennon and McCartney; the Helen Lawson song “You’re Gonna Hear From Me” by Dory and Andre Previn; ”Pour Me a Man” by Fred Barton; to the bittersweet “I’d Rather Leave While I’m in Love” by Peter Allen and Carole Bayer Sager, that finds Elliott going into the audience to playfully interact with Hollywood TV actress Judith Chapman of “The “Young and the Restless”.

“Crawling Back to Broadway”, is a musical revue that Elliott grabs and then makes it his own. His style is easy to appreciate, despite the emotional content in songs dealing in loves won and then lost. Everyone can relate to those songs. His show features eighteen numbers that are both amusing and inspiring, funny and compelling, and just flat out entertaining. Standout renditions of “High Flying Adored” from Andrew Lloyd Webber and Tim Rice’s “Evita” to “Applause” by Lee Adams and Charles Strouse, to the powerful and soaring, eleven o’clock spot number “Everything’s Coming Up Roses” from the block-busting Julie Stein and Stephen Sondheim musical “Gypsy” make “Crawling Back to Broadway”, a fun and entertaining musical revue evening. If the show pops up again in a Coachella Valley performing venue, make sure you see it.