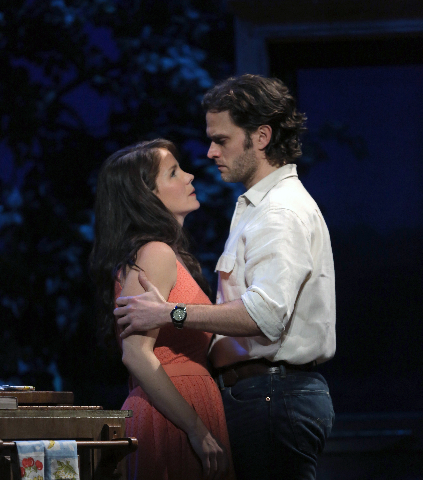 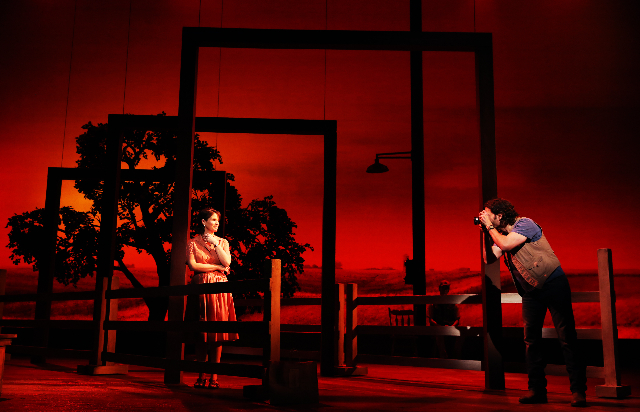 It’s not a good sign when you can’t understand the lyrics to the opening song of a musical adaptation of a beloved book that spent almost three years on the New York Times Bestseller List.

Unfortunately, that was the case during a recent performance of an equity national tour of the Broadway musical adaptation of “The Bridges of Madison County.” The tour is finishing up a run at the Raymond F. Kravis Center For the Performing Arts in West Palm Beach before the mostly strong, tender and heartfelt production travels to other cities.

In a musical adaptation, especially of a story as popular as “Bridges,” one desires to judge immediately whether the music and lyrics enhance the romantic tale. In this case it mostly does, deepening mood and enhancing characters’ feelings and emotions.

But Elizabeth Stanley, as Francesca Johnson, a married Iowa housewife in 1965 who is quickly smitten with love for a stranger, enters the stage at the beginning and sings lyrics that are hard to understand. It’s not the only time Stanley, who fares fine otherwise, doesn’t sing clearly.

Perhaps it’s the fact that Stanley speaks and sings in an Italian accent, which sounds authentic but makes her words at times incomprehensible.

There was  frustration to make out the lyrics Johnson sang about her journey from wartime Naples to Winterset, Iowa, with her new husband, nicknamed “Bud,” an American soldier.

But all isn’t lost. The melody reinforces an otherworldly sound, which is appropriate; in the novel, the stranger who shows up on the Johnson doorstep, Robert Kincaid, is so lovable and winning, it’s almost as though, at least for Johnson, he’s from another world – a “leopard-like creature who rode in on the tail of a comet,” as she describes him in Robert James Waller’s novel.

The musical adaptation, while mostly faithful to the book, isn’t as moving or heartbreaking as the novel. Absent from the stage adaptation, for instance, are scenes that take place in the future, when Johnson as a senior citizen is reminiscing wistfully about her time spent with Kincaid.

What’s particularly powerful about those scenes, which make us heartbroken and yearn for the two to somehow mysteriously reunite, is that Johnson can still feel the late Kincaid’s presence – that’s how vivid the National Geographic photographer’s every move, touch and smell seemed to her. During the four days they spent together, Kincaid gave Johnson an almost indescribable romantic experience, complete with intercourse, her rough around the edges husband never nor could have given her.

Now, here we enter a moral area where, for most people, cheating on your spouse – and, by extension, your two school-age children -- is considered an unthinkable, hurtful act of cowardice and selfishness. Somehow, we never get a sense of Johnson as a philandering, uncaring woman who turns her back on her family. Quite the opposite, in fact.

In the novel, before her death, Johnson penned a letter to her children, which they read after she’s gone, explaining what Kincaid meant to her. She comes across as a devoted, sympathetic, selfless wife and mother.

“In a way, he was not of this earth. That’s about as clear as I can say it,” Johnson writes. “Understand, I loved your father in a quiet fashion. I knew it then, I know it now. He was good to me and gave me the two of you, who I treasure. Don’t forget that. But Robert Kincaid was something quite different…He somehow coupled enormous intensity with warmth, kindness and there was a vague sense of tragedy about him.

“If you love me, then you must love what I have done.”

She writes that the photographer “taught me what it was like to be a woman in a way that few women, maybe none, will ever experience. He was fine and warm, and he deserves, certainly, your respect and maybe your love. I hope you can give him both of those. In his own way, through me, he was good to you.”

Unfortunately, Pulitzer Prize Winner Marcia Norman (The Secret Garden, The Color Purple), who wrote the book of the musical adaptation, decided to leave the letter out.

It’s too bad that, unlike in the novel, we never learn how Johnson’s children reacted to their mother’s affair.

One of the songs “Falling Into You” combines an upbeat melody with gentle, soft notes.

The heartfelt lyrics include “What was I saying before about being lost? The thing is, I knew where I was, but not where I was going. Why did I walk those mountains? Why did I ride those ships?

Other lyrics vividly convey the urgency to make the most of the precious little time the pair have together.

“You and I have just one second and a million miles to go,” Kincaid sings to Johnson.

Stanley’s singing voice can be gentle and reach the highest notes without her shrilling. But again, we as an audience must understand the lyrics she’s singing.

Andrew Samonsky, who plays Kincaid, has a versatile singing voice that can hit the high notes with delicacy and ease, while at other times has a vigorous, expressive quality.

The two possess a wonderful chemistry – right down to the kisses they share with one another.

Tyne Rafaeli, who re-created the original Broadway direction by Bartlett Sher, places the two in snuggly positions that convince us how close the pair have grown over such a short time.

Samonsky excels overall as Kincaid, who crosses paths with Johnson after he drops by her house to ask directions for covered bridges in the area he plans to photograph for National Geographic.

The actor imbues the character with a vibrant intensity and friendly charm and speaks in a soft, tender, low, sincere and at times vigorous voice. There’s nothing even slightly rough or primitive about Samonsky’s Kincaid.

Stanley invests Johnson with a low-key contentedness in the beginning. She makes her character seamlessly transition into a radiant but torn and uncomfortable woman when her family returns from the Illinois State Fair (it was during their several-day trip there that the Johnson-Kincaid romance took place).

Director Rafaeli’s detailed, sensitive direction serves the production well, but  questionably involves placing “offstage” characters on-stage; they’re sitting there like statues with nothing to do.

While the actors impress, the production’s even brighter stars are lighting designer Donald Holder and Mikiko Suzuki MacAdams, who adapted Michael Yeargan’s original scenic design. A picturesque, serene background of the countryside is breathtaking and impressively real. Holder’s use of colors underscore the non-realistic, at times dreamy atmosphere.

The stand-alone set pieces also suggest non-realism. An open window hangs in mid-air, connected merely by two angled bars. When this set piece moves on stage, it descends from above (perhaps symbolizing the otherworldly quality of Kincaid who, in some mysterious way, might have fallen into Johnson’s arms from the heavens)?

“The Bridges of Madison County,” while not the most original piece of theater, is nevertheless a tale that will resonate with anyone who’s fallen intensely, uncontrollably in love with someone at first sight. The story also includes a morality tale that, on the surface, might seem black or white, but upon further reflection, opens our minds. However wrong Johnson’s act might seem, we’re forced to see things from her point of view. And when we do, she leaps right into our soul.

In a story featuring a photographer as a main character, the most important image is not of one of the covered bridges, or even the luscious scenic design. It’s the image of the exotic Kincaid, forever etched into Johnson’s conscious and unconscious mind.

Kincaid randomly stopped at Johnson’s house to ask for directions to the covered bridges. But one direction, which he didn’t even ask for, took him right into Johnson’s heart and soul.