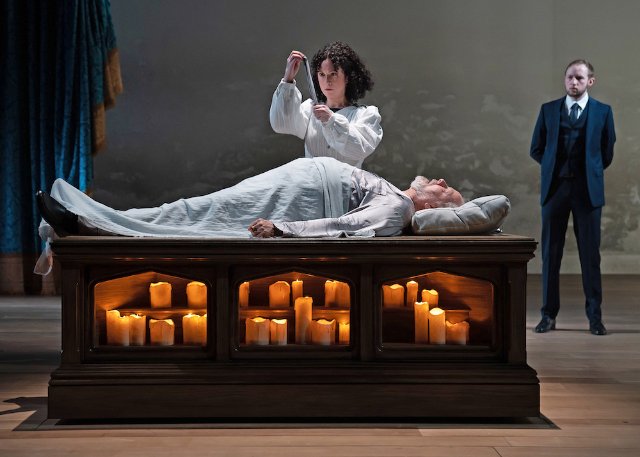 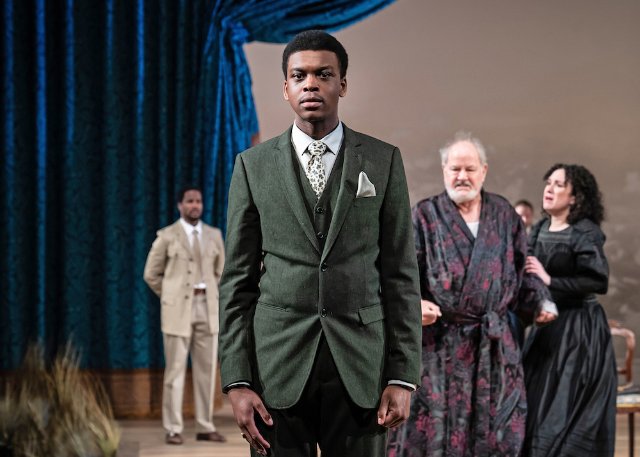 Helen is a bright, attractive young woman, but, sad to say, she’s not royal. So Bertram/Count of Rossillion, the man she loves for reasons not clear, scorns her. The daughter of a famous doctor, Helen is able to cure the ailing King of France and as a reward, gets to choose a husband. But instead of marrying Helen, Bertram goes off to war. Conspiracy ensues by three women and Shakespeare’s All’s Well That Ends Well manages to have a happy (although quite sudden) ending, thus ensuring its place as a “comedy” as well as one of the Bard’s “problem plays.” Part of the “problem” is that the plot is actually a lot more complicated than my brief summation.

All’s Well is now on stage at Chicago Shakespeare Theater in a lively and energetic staging by Shana Cooper, a director known for her use of movement to express ideas and emotions.

The primary couple—Alejandra Escalante as Helen and Dante Jemmott as Bertram—are perfectly capable in their roles, although Jemmott is a bit low energy and fails to make us root for him in any way. His mother, the Countess of Rossillion, played by the great Ora Jones, is a delight—witty,  wise and occasionally twinkly-eyed as she plays one of Shakespeare’s charming older woman roles. Her scenes with Lavatch, her clown, played by the equally delightful Elizabeth Ledo, are some of the brightest scenes in the play. Helen is the Countess’ ward since the death of her father, the doctor. Does that complicate her possible relationship with Bertram, son of her Countess guardian?

Cooper adds some magic to All’s Well, in a beautifully lighted scene where Helen cures the king (Francis Guinan) of his “fistula” (look it up) and he leaps off his sickbed, ready to reign again. (Lighting design by Adam Honoré and magic by Dendy.) That’s when Bertram, chosen by Helen as her bridegroom, deserts the scene.

Helen is nearly sick from her love of Bertram. When she finds he will leave, she mourns:

“I am undone, there is no living, none,
if Bertram be away. ‘Twere all one
That I should love a bright particular star
And think to wed it, he is so above me….
The hind that would be mated by the lion
Must die for love….”

After Bertram deserts her for the battlefield, Helen decides to follow him to Italy, where she meets Diana (Emma Ladji), with whom Bertram is already infatuated. With the help of the Widow Capillet (Christiana Clark), Diana’s mother, they invent a plot to enmesh Bertram in their wiles.

The Soldier Lords venture to the wars in Italy. Photo by Liz Lauren.

Another character who adds wit and fast talk—sometimes too much and too fast for his own good—is Parolles, defined as a companion of Bertram, played by Marc Bedard. He comes to an unfortunate end later, but we can enjoy his wit, his wardrobe (oh, that red jacket), and his conversation on virginity with Helen.

The movement scenes for which Cooper is well known are crafted with movement designer/choreographer Stephanie Martinez.  The play opens during the funeral of the Countess’ husband. The Countess is on stage for a few moments alone, then guests begin to enter from throughout the  Courtyard Theatre, somberly moving and dressed in black.

The military scenes are thrilling, with seven to nine soldiers in each scene, drilling, marching and battling, led by their captain. These scenes reminded me of Cooper’s staging of Julius Caesar in 2019 for the Theater for a New Audience at the Polonsky Shakespeare Center in Brooklyn.

Scenic design and costuming offer an interesting contrast. Costumes (by Raquel Barreto) are of a generic modern era. Men, when not in khaki battle dress, wear well-tailored suits; women’s colorful dresses are typically mid-length, except for the Countess, who is in long gowns. Scenic design (Andrew Boyce) is extremely minimal. In many scenes, the stage is bare. Two ornate chandeliers mark the King’s realm. Adam Honoré’s lighting design is fluid and essential.

All’s Well That End Well is based on a tale from Boccaccio’s The Decameron. (It was tale  9 of day 3: the story of Giletta di Narbona.) Like a few other Shakespeare plays, All’s Well is considered a problem play, suggesting that it involves complex ethical issues that can’t be dealt with by simple solutions. Most scholars believe that Thomas Middleton, a noted playwright of his time, either collaborated with Shakespeare on the play or revised it later.

All’s Well That Ends Well continues through May 29 at Chicago Shakespeare Theater on Navy Pier. Tickets are $49-$90. Buy them online or call the box office at 312-595-5600. Running time is 2 hours and 20 minutes with one intermission. Proof of vaccination and a photo ID are required for admission. Masks must be worn over nose and mouth throughout your time in the theater.