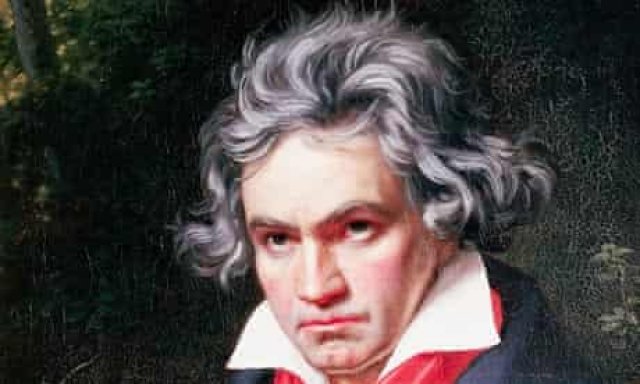 The Orchestra Now opened its belated celebration of Beethoven’s birthday. Their performance of the Fifth Symphony lay somewhere between the unearthly suggestion the composer may have intended, and a fierce protest. From the introduction of iconic Da, da, da, DUM, either a major or minor key (although we’re told this is a minor piece), to that figure's infinite variety of repetition through the piece, TON reminds us of why this is the symphony of symphonies.

TON choses to let an orchestra member introduce each work.  It is appropriate for a trombonist to give us the Fifth. Beethoven in the Fifth was the first composer to introduce the trombone as an orchestra member. We eagerly await its arrival late in this symphony.  The composer calls for three, alto tenor and bass.

The violin, cello and piano trio was a popular salon grouping. No important composer before Beethoven, nor, in fact, any future composer, would  combine this trio as soloist with an orchestra.

The trio’s soloists in the TON performance were undaunted by the challenge of balancing their performance with each other and with the orchestra.  The Maestro’s clear suggestions help.  The composer, realizing that it was the cello has the most difficult balancing act, gave the instrument a place of pride by composing for its upper register and by having it introduce themes when they first appear.  Peter Wiley creates beautiful tones. His melodies entrance.

Of course, this is not a concerto in which the soloist (s) and orchestra are in dialogue.  All the dialogue happens within the trio.  Yet, as performed by TON, the work was exciting. Three goes at a conclusion were not enough!

Maestro Bostein encouraged the orchestra to bring grandeur to the first and last movements of and deep feeling to the all too brief slow movement. The work may have been written with Archduke Rudolph in mind. At sixteen, he was a student of Beethoven’s.  It is in any case a royal pleasure.

The concert concluded with a riotous performance of Beethoven's Seventh Symphony. The Maestro drew out articulate phrasing and thrills at every turn.

TON brings a freshness to each work they perform.