Joshua Roman Performs at The Crypt

Cellist Beams Us Up with Mystery and Spirituality 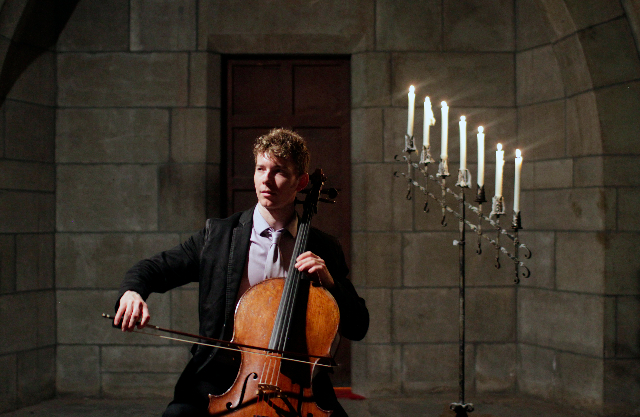 Joshua Roman speaks to us with his cello 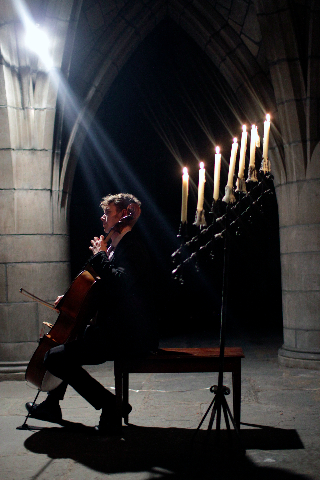 Roman performs his own piece, Riding Light. He invites us to buckle our seatbelts and ride the light as we listen to the cello, inspired by Einstein, take us into a new space. 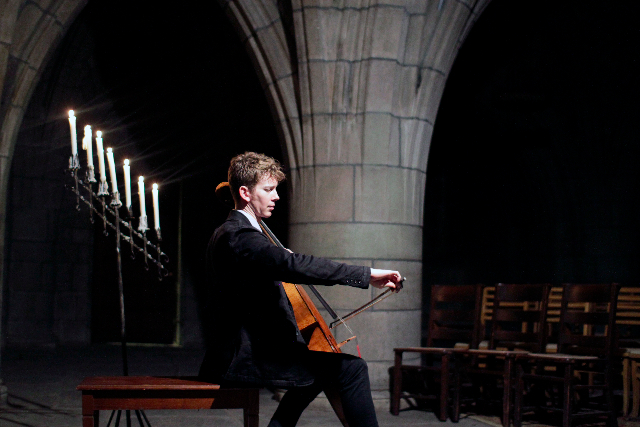 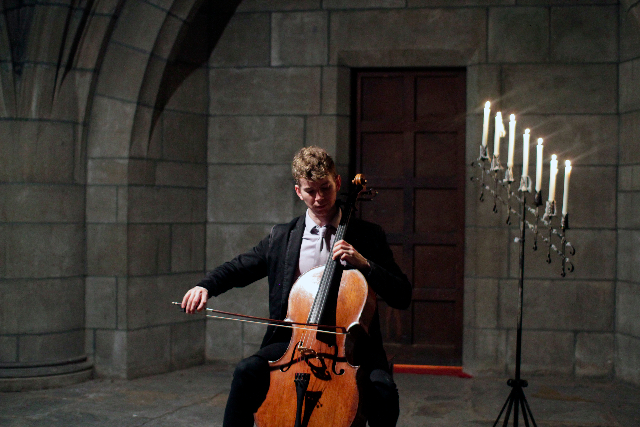 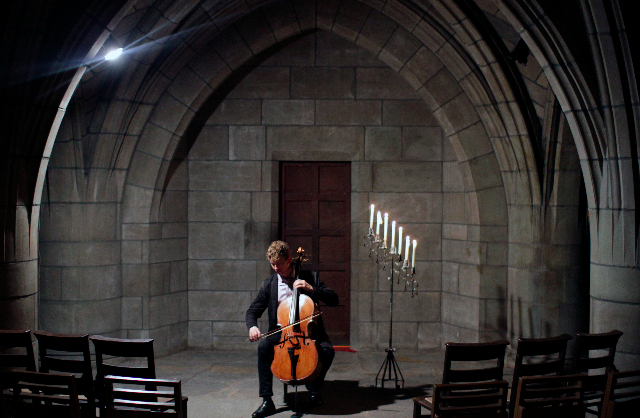 Joshua Roman embraces the split personality of his instrument. The reliable bass and the beautiful tenor lines of the upper register range from mellow and warm, to searing tones which plea. His passion unifies the music.

Roman approaches his cello as a friend and collaborator. The Crypt Sessions invite audiences to be friends and collaborative listeners and to meet and greet on the terrace of the Church of the Intercession as the sun sets. Over delicious foods by Fay Leshner of Ward 8 and wine selected by Magnum Opus, you find out why your fellow Crypt listeners have come. They seek the pleasure of listening to beautiful music performed by gifted artists in a very special setting.

Eric, a man who has an Analytics company, better than Google's, loves the performances. He will miss the inauguration of Kevin Put’s opera in the end of May because he is driving around the country, participating in martial arts events in whatever town he lands. A young man, Devin,  runs a real estate rental and sales company that emphasizes the tenant/buyer, thereby giving landlords/owners a better match for their properties. Win/win.

The real estate mogul had tried to get tickets for the Crypt Sessions before, but couldn’t. These events sell out quickly. This time he had won the lottery. He was accompanied by a member of the staff at NYU's Stern School of Business. Eric, the Analytics man, has been to events past. He thought Conrad Tao was wild and crazy, but in a wonderful way.

Andrew Ousley, the impresario who conceived this series, knows  what he is doing. Artists who play in the Crypt like the venue. Roman, who accompanied in previous concert, looks up appreciatively to the arches and curved ceilings, and comments on the darkness and its sacred quality.

In preparing a program, artists design for the space. Roman chose a George Crumb cello sonata, full of mystery and eerie tones. He brings out Crumbs’s narrative qualities, imagining himself in a forest surrounded by nature and a mysterious evening. In the final movement, we can hear Roman running as he elicits increasingly urgent steps on his instrument.

Roman begins with Bach, to whom he returns at every opportunity. His passion is fully realized in performance. After the prelude, he takes a moment to talk about the different dances that form a suite. As he is as balanced in his spoken guides to composers as he is in performance. Admiring of the prolific Bach, who he imagines as the organist composing in real time, an improviser without flaws. Bach’s harmonies are where you start in music theory and you quickly see the rules. It is their periodic abandonment at just the right moment that makes Bach tantalizing. The Sarabande holds deep meaning and Roman draws it from each string as he bows.

Roman is very much his own man. His parents had wanted him to play the violin, but back before he can remember, he wanted the cello. His three siblings all had to make up for this choice. They play the violin.

Home schooled, his decision to be a musician, composer and curator is obviously his own. At the top of his list is selling music to us, engaging us as listeners and transporting us spiritually and viscerally. We wish to respond.

Stories about György Ligetti’s composition of a cello sonata abound. Roman smiled: they are somewhat true and somewhat untrue. The two movements were composed five years apart, so the stories ring as possible.

The first movement was created for a fellow student who played the cello and attracted Ligetti’s timid attention. He is more full-throated in expressing the passion in the second movement, written for another female cello student who’d caught his ear. Roman catches ours as he displays interesting finger and hand movements to achieve not only notes but slides in expression of affection.

At the conclusion of the program, Roman buckled us up for a transcendent ride on a beam of light, wafting us to the top of the arches with his composition Riding Light. It is a remarkably evocative piece, commissioned by a church, with the right blend of reverence and exuberance.  Roman as composer has chosen the notes he plays, and he honors each and every one of them in performance.

The Crypt becomes a perfect setting for artists who want to communicate and audiences yearning for intimacy in the music events they attend.