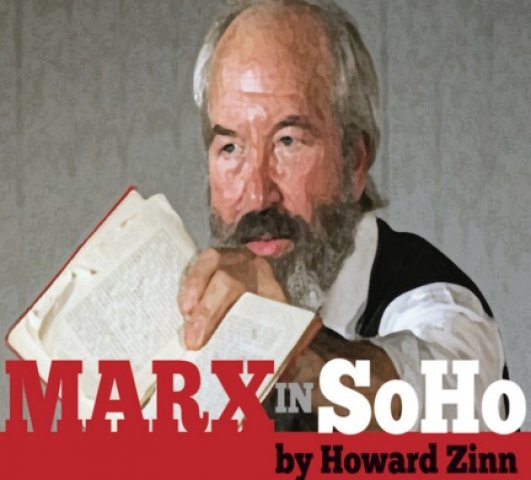 Marx in Soho
By Howard Zinn
With Bob Weick as Karl Marx
Iron Age Theatre in association with Juniper Productions
At the Soho Playhouse.

If the thought of an hour and fifteen minutes of Karl Marx written by a renowned historian seems like a lecture you’d rather skip—don’t! This is theater, and exciting at that. Actor/Producer Bob Weick allows us to believe that this extraordinary 19th century thinker has come back for a beer, a chat, and some reflections.  What is also reflected with a sense of humor is a quizzical look at the 21 century.

We are all aware of Karl Marx as a philosopher and controversial visionary. Here we meet the man. He is present as a full human being with faiths, regrets, loves and passions. His wife Jenny, who is commonly noted as “as a selfless secretary to the great man”, emerges as a woman of intellect and opinion.

We meet the man who lost two children, whose wife nearly died of smallpox, which left her disfigured and ugly in her own eyes. He was exiled from his home in Germany and then expelled from France.

On his walks home each day from his scholarly work at the library, he is appalled by the conditions of the London’s slums. He shapes his life around the pursuit of understanding and illuminating the workings and economic/political system of capitalism.  His friends Engels, Proudhon, and Bakunin “stop by” at Karl’s Soho apartment.

This is a one-man show. The presence of other characters on the stage is the ingenious work of Bob Weick, who worked closely with the historian/playwright Howard Zinn on the creation of this piece. It has been performed more that 300 times since its debut in Philadelphia in 2004. The collaboration is evident in the structure of the drama, which relies heavily on Weick’s command of the mood and setting.

Director Doyle, founder of Iron Age Theatre, keeps us aware of the unseen pieces of Marx’s life: his wife, children, friends—and  audience. Although this is not a lesson in history or philosophy, there is plenty to learn. It is given to us in bite-sized portions, sprinkled with pathos and humor.

Marx does note some parallels that he has observed between his time and ours: brutal wars, homeless indigents, poor health services, and the rich getting richer while the poor grow poorer. Whether you are the sort of person who is familiar with Marx’s analyses or new to his theories, this play is wonderfully entertaining.

In playwright Zinn’s words, “We admire Weick’s transitions, changes of pace, and nuances of feeling…John Doyle directed the play brilliantly.”