At A Red Orchid Theatre 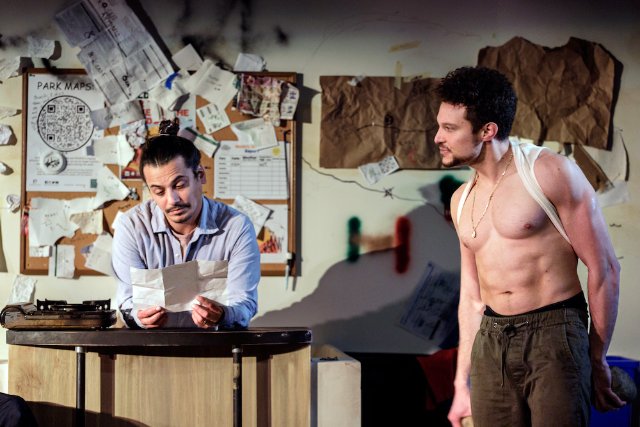 Last Hermanos by Exal Iraheta is a play about two brothers, set at some time now or in the recent past or near future, in an abandoned visitor center in a deserted park in central Texas. The brothers are escaping from something—possibly persecution by the US government—and trying to make The Crossing. At first they’re waiting for a team that’s been paid to take them; then, finding themselves deserted, they desperately seek a way to safety—to Piedras Negras across the river from Texas. The source of the brothers’ fear is ambiguous but ever-present.

At A Red Orchid Theatre, Ismael Lara Jr. directs this thriller with moderation and carefully builds the tension. Constant humming and buzzing sounds (drones or insects?) seem to threaten Miguel (Esteban Andres Cruz) and his younger tough guy brother Julio (Roberto Jay). Miguel is a thoughtful man, an academic with a PhD and a husband in Mexico that he’s trying to join. He and Julio have been estranged but now they’re making the journey together, but not without sibling battles getting in the way. Julio has no respect for the “friends” who are helping them cross; he’d prefer to use Las Aguilas, a radical group that he’s connected with.

Trawling the river nearby for fish, Miguel meets Shepherd (Chris Sheard), a US military deserter who’s camped out nearby and trying to rejoin his Mexican wife and sons across the border. At first Miguel is afraid of Shepherd, but they talk and find they have things in common and agree to help each other. Miguel doesn’t tell Julio about Shepherd, but Julio finds out and doesn’t think cooperating with a white guy is such a good idea.

Director Lara and his cast successfully build the mood of desperation. The three actors are determined to reach their goals, each in his own way. Miguel, the academic, gains strength in his struggles to get back to the husband he loves. Julio is street smart but obsesses over discrimination against his family by “blue eyes.” And Shepherd, seemingly a rational actor, fails to read the brothers correctly.

The ending of Last Hermanos is explosive and stunning, especially in the tiny, claustrophobic space of A Red Orchid, where the audience sits only a few feet from the performers. This is the kind of play that you want to see in a space like A Red Orchid’s, rather than being separated from the action by a raised proscenium stage and rows of viewers in front of you. We’ve had great theatrical experiences here, with plays like Small Mouth Sounds, Traitor and Killing Game as just a few examples.

Mara Ishahara Zinky’s set design mimics a stop on a dangerous road where apprehensive travelers have passed through. The space is trashed, with overturned crates and chairs and a bulletin board layered with notes left for friends trailing behind. Lighting is by Josiah Croegaert and sound by Joe Court. Costumes are by Johan Gallardo. Alden J. Vasquez is stage manager.

Last Hermanos by Exal Iraheta, a Chicago-based Salvi-American, was developed as part of the Martha Heasley Cox Virgin Play Festival at Magic Theatre in San Francisco and was further developed by A Red Orchid Theatre, which produced it as an audio play last year. This is the play’s theatrical world premiere.

Last Hermanos continues through June 12 at A Red Orchid Theatre, 1531 N. Wells St., with performances Thursday-Sunday. Tickets are $30-$40 and can be purchased online or by calling 312-943-8722. For more information on this and other productions, see www.theatreinchicago.com.